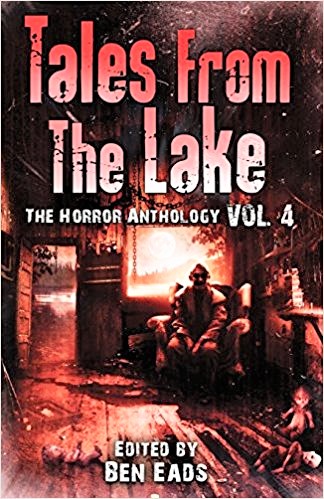 Tales from the Lake Volume 4:

“When the Dead Come Home” by Jennifer Loring
“The Folding Man” by Joe R. Lansdale (reprint, not reviewed)
“Go Warily After Dark” by Kealan Patrick Burke
“To the Hills” by T. E. Grau
“Everything Hurts, Until it Doesn’t” by Damien Angelica Walters
“Drowning in Sorrow” by Sheldon Higdon
“Whenever You Exhale, I Inhale” by Max Booth III
“The Withering” by Bruce Golden
“Grave Secrets” by JG Faherty
“End of the Hall” by Hunter Liguore
“Snowmen” by David Dunwoody
“Pieces of Me” by T. G. Arsenault
“Neighborhood Watchers” by Maria Alexander
“The Story of Jessie and Me” by Timothy Johnson
“I will be the Reflection Until the End” by Michael Bailey
“The Honeymoon’s Over” by E. E. King
“Song in a Sundress” by Darren Speegle
“Weighing In” by Cynthia Ward
“Reliving the Past” by Michael Haynes
“The Long Haul” by Leigh M. Lane
“Dust Devils” by Mark Cassell
“Liminality” by Del Howison (reprint, not reviewed)
“The Gardener” by Gene O’Neill
“Condo by the Lake” by Jeff Cercone

Two dozen tales of terror fill the pages of this anthology, all but two original to the volume. The majority of the stories deal with families, usually involving the loss of a loved one.

“When the Dead Come Home” by Jennifer Loring features a mother mourning for her drowned child. She hears a baby crying in the swamp near her new home. What she discovers leads to an unexpected revelation. The author delves deep into the mother’s psychology.

Set during the bombing of a city during wartime (possibly London during the Blitz,) “Go Warily After Dark” by Kealan Patrick Burke depicts a family retreating into their basement during the bombardment, only to face much stranger terrors. This story has an eerie, cold mood, partly because the characters are not given names.

A twist on a classic horror theme appears in “To the Hills” by T. E. Grau. A father takes his young daughter to an isolated cabin to escape a dangerous threat. What happens may surprise readers, and make them wonder who the real monsters are.

“Everything Hurts, Until it Doesn’t” by Damien Angelica Walters begins with two teenage girls, whose mother has just died, cutting each other in order to prevent painful emotions from coming out. What begins as a powerful exploration of the phenomenon of self-injury turns into a more typical horror story as multiple plot twists occur.

Also facing the loss of a parent is the protagonist of “Drowning in Sorrow” by Sheldon Higdon. His mother has kicked his father out of their home. While fishing, he encounters a doppelganger and has to face the truth about himself. Although gruesome in places, this is primarily an introspective story.

Two young gay men are the main characters in “Whenever You Exhale, I Inhale” by Max Booth III. The father of one is an abusive man who hates his son’s sexual orientation. Violence follows, as well as an unexpected supernatural power the lovers share. The weakness of this story is the fact that the father is an exaggerated figure of evil.

In “The Withering” by Bruce Golden, the narrator’s private journal contains material that causes him to be condemned to a slow, horrible death by his oppressive society. This quietly chilling story reminds me of Kafka. Unfortunately, the beginning contains a grammatical error, which spoils the author’s formal, elegant style.

Set in 1965, “Grave Secrets” by JG Faherty deals with a widower and his adult son in search of the father’s brother, who disappeared twenty-five years ago. Their quest leads them to strange discoveries in a small town. This is a tale of eldritch horror in the tradition of Lovecraft.

A high school student has visions of a hideously mutilated dead woman in “End of the Hall” by Hunter Liguore. The warning she has for him forces him to face great danger, and reveals secrets from the past. Despite its gruesome content, this story reads like young adult fiction.

The title objects in “Snowmen” by David Dunwoody appear out of nowhere in large numbers, with no apparent explanation. The protagonist has a dark secret of his own. This is a surreal tale of supernatural justice.

Planning suicide, the narrator of “Pieces of Me” by T. G. Arsenault heads for a place in the woods where others intending to kill themselves have gone. A bizarre and violent transformation follows. A scene in Dante’s Hell may have inspired the author’s vision.

Women who use magical rituals to protect their homes from evil beings are the title characters in “Neighborhood Watchers” by Maria Alexander. A new arrival dismisses them until weird things happen. This story begins as dark comedy, although tragedy follows.

An unspecified disaster leads to the breakdown of society in “The Story of Jessie and Me” by Timothy Johnson. The narrator faces many challenges in his struggle to protect the woman he loves. This is a grim, violent story of survival, with just a touch of hope at the end.

“I Will be the Reflection Until the End” by Michael Bailey is a nostalgic portrait of the narrator’s sister. One incident in this character study creates a darker mood, but it still seems out of place in an anthology of horror stories.

“The Honeymoon’s Over” by E. E. King begins with a man’s wife being killed in an automobile accident. The husband and his dog move in with his brother. Another death follows. This is an odd story, which may leave the reader pondering its ending.

The protagonist of “Song in a Sundress” by Darren Speegle tracks down a legendary creature that killed one of his relatives a long time ago. This horror story combines ghosts and monsters, resulting in an average example of the genre.

“Weighing In” by Cynthia Ward is a brief story with a single idea. Suffice to say that a starlet buys an object from the estate of a deceased movie star, with surprising results. A touch of satire appears in the fact that the starlet weighs eighty-nine pounds, and wants to be skinnier.

A man who spent nearly three decades in prison for murders he did not commit returns to the scene of the crimes in “Reliving the Past” by Michael Haynes. He confronts the real reason for the deaths, as well as painful memories. This is an effective tale of the supernatural.

“The Long Haul” by Leigh M. Lane features a man who hides his criminal activities from his wife, who is dying of a rare form of cancer. This is a sad story full of tragic irony, as the man realizes to his horror what his crimes have done.

A unique menace appears in “Dust Devils” by Mark Cassell. A driving instructor arrives at the home of one of his students, only to find unnatural horrors. The plot is fast-paced and full of action, almost in a cinematic way.

Two seemingly unrelated scenes begin “The Gardener” by Gene O’Neill. One, set in the past, shows a teenage girl getting revenge on a boy who insults her twin sister. The other, set in the present, presents the thoughts of a man reminiscing about his three lost loves. The pieces come together when we learn the truth about the three women. The story is an interesting example of psychological suspense.

A young blind woman and her mother face monsters that possess the bodies of their victims in “Condo by the Lake” by Jeff Cercone. Cut off from the rest of the world, the mother must venture outside their home to obtain food and water. This apocalyptic chiller features a twist ending which the reader may be able to predict.

Victoria Silverwolf wonders why this volume has a subtitle when the first three volumes did not.