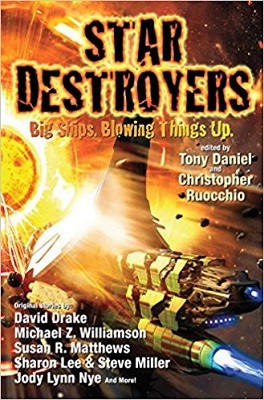 “Superweapon” by David Drake
“A Sudden Stop” by Steve White
“Another Solution” by Mark L. Van Name
“The Magnolia Incident” by Mike Kupari
“A Helping Hand” by Jody Lynn Nye
“Boomers” by J. R. Dunn
“Hate In the Darkness” by Michael Z. Williamson
“The Stars Are Silent” by Gray Rinehart
“Excerpts From Two Lives” by Sharon Lee & Steve Miller
“Icebreaker” by Dave Bara
“Try Not To Kill Us All” by Joelle Presby
“Skipjack” by Susan R. Matthews
“Homecoming” by Robert Buettner
“Not Made For Us” by Christopher Ruocchio
“A Tale Of The Great Trek War Aboard The Starship Persistence” by Brendan DuBois

In “Superweapon,” David Drake spins a story about the conflict between scientific academics and the military regarding the value of an ancient starship. The story was something of a departure for Mr. Drake, and sad to say not in a good way. Not that it was a bad tale, it just didn’t speak to me.

“A Sudden Stop” by Steve White is set in the same universe as Mr. White’s upcoming alternative history military science fiction book, Her Majesty’s American. The premise is that the American colonies resolved their differences with England and never left what became a star spanning empire.

The story itself is engaging and well-crafted and, whilst a tad predictable, left you wondering to the end how the protagonist was going to win through. Mr. White provided an excellent sample of his new universe and leaves the reader impatient for the next adventure.

“Another Solution” by Mark L. Van Name has an American Cold War feeling to it along the lines of Fail Safe (1962 novel published during the Cuban Missile Crisis dealing with accidental nuclear war and then made into the iconic film of the same name in 1964). The writer poses the question of what do you do when your enemy deploys essentially the same doomsday weapon you do at the same time? The twist at the end was unexpected and frankly more than a little funny. Worth your time to read.

“The Magnolia Incident” by Mike Kupari skillfully tells the story of a young officer tossed into a unique alien contact situation. The protagonist represents a frankly borderline xenophobic libertarian-based government that Kupari does an excellent job of explaining the backstory of, through letters to a sister and journal entries that never feel like data dumps.

The end of the story leaves you hungry for more.

In “A Helping Hand” by Jody Lynn Nye the author does a brilliant job imagining a situation where an aging USS Colorado, a Virginia class attack submarine (The editors infuriated me in the introduction by talking about boomers, which is Navy slang for missile subs when the USS Colorado, a fast attack sub, is not a boomer and by implying it makes the author look like she didn’t know what she was doing. Ms. Nye does her homework and Navy brats and bubbleheads can unclench their teeth and enjoy the story), winds up on an alien world where its technical inferiority in interstellar politics is an actual asset. The job of the naval academy training ship Colorado and its crew of mostly retirement age officers and cadets is to extract a group of volunteer healers, including a scion of a major interstellar power from a war zone. The collision of medical idealism and military practicality coupled with a hard deadline to leave for home makes the story a good read.

“Boomers” by J. R. Dunn is another alternative history with a much darker tone. The story description says it all: “What if the space race had begun earlier and was run harder and for keeps?” Mr. Dunn creates a world where Americans and Soviets have nuclear weapons platforms in space powered by Orion style nuclear drives. Imagine if you will how those Soviet crews might react to the real world fall of communism in 1989 in the Soviet Union.

Dunn chronicles the story of a boarding party of Americans tasked to neutralize a Russian “boomer” that did not stand down.  The story is well done and straightforward. However, there is a homage to a very famous Robert A. Heinlein short story that provides a grace note that catapults the story from good to great.

Michael Z. Williamson returns to his famous Freehold universe with “Hate in the Darkness,” a cat and mouse story between a Freeholder attack ship and a group of Earth UN forces. The story is everything you would expect from Michael Z. Williamson, well told and well plotted. The reader has no real idea till the very end how it will turn out. What sets “Hate in the Darkness” apart from the usual military science fiction tale is that all the characters are three dimensional, with no clearly identified enemy and no easy to spot hero. This was a story of two groups defending their respective homelands, and to paraphrase General Patton, each trying to stay alive and to make the other SOB die for their country.

Gray Rinehart examines what happens when a person is faced with the necessity to act even knowing that the cost will be death, or worse, in “The Stars Are Silent.”  Thrust into command of a heavily damaged ship, Lieutenant Biermann is not only dealing with repairs to get back underway to warn his people of an alien attack but the knowledge that the ship’s cybernetic control system is making the operators psychotic or outright killing them.

“Excerpts from Two Lives” by Sharon Lee & Steve Miller tries to tell the story of a long-time couple, one military and one a scientist, as they both seek to restore lost glory to their nation using poorly understood old technology. It doesn’t end well.

I say “tries” because the kindest thing to say is the story is a muddle. It reads like, to borrow from the title, a collection of excerpts from different stories. The prose is overblown and the thread of the tale almost impossible to follow. Unless you are a hardcore Lee and Miller fan, give this one a pass.

Dave Bara takes us to the seas of Europa in “Icebreaker.” The story is well executed and if you want a fast-paced David and Goliath tale, then “Icebreaker” is serviceable. On the other hand, it leaves you wondering why the commander of the vessel acted as she did. While the author implies that taking out the opposing vessel would greatly help the company she worked for, the bottom line is that it is simply not enough justification for a private merchant craft to pick a fight with a far superior military vessel. Your mileage may vary, but the idea is a death blow to suspension of disbelief.

“Try Not to Kill Us All” by Joelle Presby is a darkly humorous story focused on the idea that one alien race’s trash is humanity’s treasure. Complicating matters is the alien race in question believes in cleaning up after themselves. If the trash happens to be on planets with humans, then that is just unfortunate…for the humans. Unlike many of the stories in the anthology, the primary characters are mostly senior enlisted.  Making the enlisted crew the protagonists is a nice touch that is likely to resonate with veteran readers, who know that for all practical purposes the NCOs make things happen anyway. This was one of the better stories of the book.

“Skipjack” by Susan R. Matthews is a story about desperate times calling for desperate measures and the lengths to which a crew and its captain will go in order to stave off defeat for as long as possible. The portrayal of military virtues and courtesy is a bright spot in an otherwise very dark tale.

In “Homecoming,” Robert Buettner crafts a very Heinlein-like story of a super intelligent kid, a grizzled old warhorse, and sacrifice. Terrorists take over an old ship diverted from a trip to the breakers to pick up refugees, and it’s up to the kid and the former chief engineer to save the day. The story alone is worth your time, spotting the RAH references is a bonus.

“Not Made for Us” by Christopher Ruocchio is a boarding party story with the protagonist a young, untried legionnaire attacking a hostile ship for the first time and overcoming fear while dealing with the challenges he and his cohort encounter. The story is more horror of the Aliens variety than pure military SF, so be warned.

“A Tale of the Great Trek War Aboard the Starship Persistence” by Brendan DuBois is set aboard a generation/sleeper ship staffed by an American “Blue” crew and a Chinese (Han) “Gold” crew. Because it is an article of faith in science fiction that things have to go to perdition on generation ships, 216 years after launch, the Blue and Gold crews are at each other’s throats. This is an account of one of those wars. Mr. DuBois tells an interesting story that builds on similar ideas developed by Heinlein, James P. Hogan (Voyage from Yesteryear, 1982), and more recently Eric Flint and Dave Freer (see Freer’s 2008 novel Slow Train to Arcturus), without being derivative.