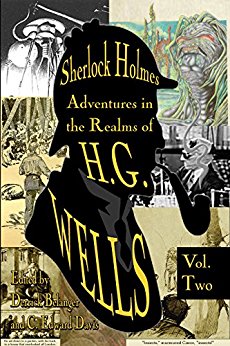 Adventures in the Realms of H. G. Wells

“The Adventure of the Red Planet” by Steve Poling
“The Clash of the Miracle Men” by Rohit Sawant
“The First Selenites on the Earth” by Derek Nason
“The Martian Spy-glass” by Jaap Boekestein
“The Adventure of the Beastly Excisions” by Benjamin Langley
“The Adventure of the Disintegrated Man” by Michael T. Wells
“Sherlock Holmes and the New Accelerator” by Mark Levy, BSI
“A Trap to Catch the Sun” by Andrew Lane
“The Misplaced Mystery Writer” by Richard Paolinelli
“The Beast Within” by Katie Magnusson
“Dr. Watson and the Martians” by C. Edward Davis
“Dr. Watson’s Neglected Fragments: The Shape of Deductions to Come” (uncredited)

The Great Detective and his associates investigate the fantastic worlds created by the master of Scientific Romances in this collection of a dozen original stories.

The hero of “The Adventure of the Red Planet” by Steve Poling is Mycroft Holmes, brother of Sherlock and an important figure in the British government. He becomes involved in the disappearance of detailed maps of Mars. The main appeal of this straightforward story is the way in which Mycroft outwits his more famous sibling.

In “The Clash of the Miracle Men” by Rohit Sawant, the detective investigates the incredible story of a constable who claims a man instantly transported him from London to San Francisco. This encounter with the god-like powers of the title character in Wells’ fantasy “The Man Who Could Work Miracles” has an anticlimactic ending.

Earth faces an invasion from the Moon in “The First Selenites on the Earth” by Derek Nason. They appear in the form of small men with their faces hidden under burlap bags. Holmes and Watson seem powerless to save the planet, even with the help of a former enemy, but the story ends with a touch of hope. This sequel to Wells’ novel The First Men in the Moon is moderately enjoyable, even if the open-ended conclusion is not fully satisfying.

“The Martian Spy-glass” by Jaap Boekestein sends our adventurers in search of the mysterious object described in Wells’ story “The Crystal Egg.” They solve an unsuspected murder. This is one of the more convincing pastiches of Arthur Conan Doyle in the book, but holds no real surprises to readers of Wells.

The mad vivisectionist from Wells’ novel The Island of Doctor Moreau appears in “The Adventure of the Beastly Excisions” by Benjamin Langley. Holmes and Watson arrive on his isolated island by accident while bound for South America. They investigate the death of a dog-man, seemingly killed by one of his fellow half-human animals. This story is a satisfying murder mystery.

“The Adventure of the Disintegrated Man” by Michael T. Wells takes place after the invaders from Mars described in The War of the Worlds were defeated. The discovery of a man burnt to ashes suggests the possibility that a Martian with a death-ray still survives. The truth is not so simple. This is a cleverly plotted story, which makes good use of Holmes’ deductive skills.

“Sherlock Holmes and the New Accelerator” by Mark Levy, BSI, pits the detective against a jewel thief who makes use of a drug that allows him to move so quickly he cannot be seen. There is not much more to the plot, which will be familiar to any reader of the Wells story referenced in the title.

“A Trap to Catch the Sun” by Andrew Lane is unique among the stories in this anthology. Instead of expanding on one of Wells’ works of science fiction or fantasy, it references his mainstream novel Tono-Bungay. A fictional radioactive substance found in that book is the story’s only speculative element. It plays an unexpected part in a bizarre case involving grave robbing and jewel thefts. This is an imaginative and compelling story that ends on a tragic note.

“The Misplaced Mystery Writer” by Richard Paolinelli features H. G. Wells himself. Instead of just writing about a time machine, he invents one. Holmes and Watson become involved in a complex journey back and forth in time. Edgar Allan Poe and Jack the Ripper also show up. This story may be too reminiscent of Karl Alexander’s novel Time After Time and the film adapted from it.

“The Beast Within” by Katie Magnusson involves one of Doctor Moreau’s creations, a wolf-bear-woman who escapes from a freak show. Murders follow her disappearance, and Holmes sets out to find her. The true story behind the killings turns out to be more complicated. This story is an effective thriller, with a character who is emotionally appealing.

Sherlock Holmes does not play an important part in “Dr. Watson and the Martians” by C. Edward Davis. Instead, his faithful companion relates his dangerous adventures during the War of the Worlds. This is a vividly written science fiction horror story, but it does little other than retell Wells’ novel.

No author receives credit for “Dr. Watson’s Neglected Fragments: The Shape of Deductions to Come.” It consists of a series of excerpts from Watson’s notes, which reference Wells’ novels The Time Machine and The Food of the Gods, as well as a famous British television series. It brings the anthology to an unexciting close.

Victoria Silverwolf believes one or both of the editors wrote the anonymous story. This deduction is quite elementary.