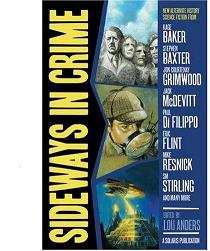 “Running the Snake” by Kage Baker

“Via Vortex” by John Meaney

“Fate and the Fire-Lance” by Stephen Baxter

“The Blood of Peter Francisco” by Paul Park

“The Adventure of the Southsea Trunk” by Jack McDevitt

“Worlds of Possibilities” by Pat Cadigan

“A Murder in Eddsford” by S.M. Stirling

“Death on the Crosstime Express” by Chris Roberson

Editor Lou Anders has gathered 15 stories from 16 of today’s best science fiction authors. At question is whether or not alternate history can be successfully combined with the classic murder mystery. Does this anthology succeed? Let’s find out.

“Running the Snake” by Kage Baker puts us in an alternate England where Rome never fell and where polytheism is alive and well. Will Shaxpur is a street punk and con artist trying to swindle the commoners of Great Brithan through the worship of a new snake god named Glycon. Will gets entangled in royal intrigue when the queen and Living Boudicca solicits his services to solve a series of family murders leading to Glycon’s altar. This is a fun, entertaining piece that sets a good tone for the rest of the anthology.

Next is John Meaney’s “Via Vortex,” a darker, more harrowing look at an alternative ”Amerika” where the official language is German. Such a seemingly small difference, however, can have a far-reaching impact. World War Two, for example, ended quite differently here than in our world. Within this backdrop come two law enforcement agents on the trail of a serial killer who uses a very gruesome mode of transportation to kill his victims. A story like this is fun to read, but I’m glad to be living in the world we have despite its myriad flaws. My only complaint is that we never really discover why the killer is killing, and that’s kind of important.

Stephen Baxter’s “Fate and the Fire-Lance” is a nice, traditional “whodunnit?” set in his Times Tapestry series (Emperor, Conqueror, et al). At issue is the murder of a Roman emperor’s son. Political intrigues abound as our heroine interviews and canvases the scene to discover the culprit. There’s an argument to be made that the story’s resolution comes too easily, but there’s no doubt that Baxter is very comfortable writing in this milieu. The alternate history here is solid.

There’s something profound in Paul Park’s “The Blood of Peter Francisco.” I just know it. Problem is, I can’t tease it out to save my life. It’s set in some kind of alternate America in the midst of a second Civil War. It’s about a botched assassination attempt. It’s about revenge. It’s about anti-Semitism and bigotry. It’s about all of these things it seems, and yet, it’s presented in a muddled, mad dash that washes over your senses and is lost.

In “The Adventure of the Southsea Trunk” Jack McDevitt proves that it’s not just politics and war that define alternate history: subtle changes in the careers of literary giants can also affect the course of time. Here we have the careers of Robert Louis Stevenson, Sir Arthur Conan Doyle, and a relative unknown Christopher McBride rolled up in a murder that asks who really created Sherlock Holmes. Good stuff.

“G-Men” by Kristine Kathryn Rusch is set in the 1960s (shortly after JFK’s assassination) and revolves around a series of murders involving J Edgar Hoover. Robert Kennedy and President Lyndon Johnson play major roles, as these murders force them to make political decisions that could have changed the course of human history. But therein lays the rub for me. Though the story is nicely written with larger-than-life characters, Rusch does not play out her “what if” to its ultimate conclusion, and thus we have no way of knowing if history would have changed at all. There’s nothing in the story that suggests to me that RFK would not have been assassinated, nor is it clear that the Johnson Administration would not have been bogged down in the quagmire of Vietnam. Thus, I don’t think the alternate history works very well here.

Mary Rosenblum’s “Sacrifice” is a wonderful tale of an alternate America where the Chinese gave the Aztecs gunpowder. With this technology, they are able to fight off the Spanish and become a world power. Within the great Quetzal’s court is a murder of the son of the Chinese Consul, and an English teacher hired to solve the mystery. Like Baxter, Rosenblum seems very comfortable weaving this tale and I was hooked from beginning to end.

In his introduction to “Murder in Geektopia”, editor Lou Anders calls Paul Di Filippo “a genius.” I’m not qualified to confirm this statement, but I can certainly say that there’s genius in his story. Here we have an alternate America where William Randolph Hearst turns from war-mongering and yellow journalism and becomes a president who literally wipes out war in our time. So what does the world do when it’s not blowing things up? It turns to the 30s and 40s pulps to create a milieu custom made for geeks like me. Filippo truly knows his geek culture, and I was salivating with every page, laughing and crying in turn. The murder of the title is hardly important as the true “genius” of this tale is the excruciating detail through which Filippo plies his prose, everything from Li’l Abner action figures to secret societies like The Sons of Chimmera, to the joint adventures of Birdalone and Gray Mouser, to people physically altering their appearance to look like their favorite comic book characters. Like the best of Avram Davidson and Harlan Ellison, the energy expressed here is apparent and I loved it.

Jon Courtenay Grimwood’s “Chicago” gives us an alternate America where syndicated crime has become an important part of the political structure of the country. Al Capone tussles with his “clone” in an attempt to regain control of the city. Grimwood has fashioned an interesting “whodunnit?” but his alternate history leaves a bit to be desired. I can’t really tell how this world works, and I kept confusing the two Al’s.

“The Sultan’s Emissary” by Theodore Judson is about an Islamic Caliphate that covers most of the world in 1650. The sultan’s emissary has been found dead in the English court and the murder must be solved before the Turks declare war. Judson is a good writer and he’s created an interesting situation. But there’s nothing that compelling about the alternate history nor is the murder itself that exciting. It’s a good story; not a great one.

I was disappointed with Pat Cadigan’s “Worlds of Possibilities.” I’ve enjoyed her stuff over the years, but this one didn’t work for me. It’s about two murders that occur in a psychic’s shop. It has something to do with the mob, and something to do with identity theft, but is it science fiction? Is it horror? Is it both? It certainly isn’t alternate history in my view. There was also this recurring concept of the “Dread” which kept rising up in the main character’s body as if it were some kind of physical affliction, but in the end, it amounted to nothing. So what was this story about? I just don’t know.

I’ve mixed emotions about S.M. Stirling’s “A Murder in Eddsford.” It’s about a murder in a world that has reverted back to its pre-industrial state. The victim in question was not without enemies and he seems to have been working on some kind of dangerous scientific experiment when he met his maker. On one hand, Stirling’s attention to detail creates a lush tapestry of British life after what he calls the “Change.” The author also has an amazing gift for dialogue. But on the other hand, the story was a bit long for the subject, and it’s easy to forget that a murder actually took place. I think this story would work better as a novel, and I hope the author considers doing that. I’d buy it.

“Conspiracies: A Very Condensed 937-Page Novel” by Mike Resnick and Eric Flint is a tongue-in-cheek look at various conspiracy theories that have occupied our political consciousness for the past century. Want to know whatever happened to Jimmy Hoffa, or the real reason behind the Kennedy assassinations? Or how President McKinley died? Look no further, it’s all here in their very condensed novel. It’s a little self indulgent at times, but I still enjoyed it.

Tobias S. Buckell’s “The People’s Machine” is another story about an alternate America where the Dutch, the French, and the Aztecs jockey for power. In this milieu, the Aztecs fought off the Spanish and then turned away from their blood cultish behavior by passing laws banning human sacrifice. But a recent murder in New Amsterdam (aka New York) suggests that the practice may still exist. Inquisitor Ixtli investigates the crime and discovers that a far more dangerous endeavor is afoot. My only complaint about this one is that there was little reason to pick an Aztec as the main character, as we get very little insight into that culture. Our investigator could have been anyone from any place.

And finally, we come to “Death on the Crosstime Express” by Chris Roberson. One of the more complex and interesting of the alternate worlds described herein, Roberson weaves a tale of death and political conspiracy as a young woman named Vivian Starkweather (I love this name) investigates a savage murder committed on an airship capable of moving from one reality to the next. What we have here is a kind of United Nations of alternate worlds, where a murder threatens the very tenuous alliance that these alternate states enjoy. The story suffers a little from the same problems that Stirling’s story does, in that one can easily forget about the main crime while trying to navigate through the web of interesting ideas, but it’s a slight problem and on balance, I found it very enjoyable.

So, my verdict? With the exception of a few sputters, I think this anthology is quite good and I heartily recommend it.