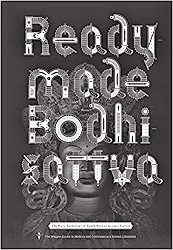 “Readymade Bodhisattva” by Park Seonghwan
“Empire Radio, Live Transmission” by Choi In-hun
“Cosmic Go” by Jeong Soyeon
“Along the Fragments of My Body” by Bok Geo-il
“Storm Between My Teeth” by Lim Taewoon
“The Sky Walker” by Yun I-hyeong
“Between Zero and One” by Kim Bo-Young
“The Bloody Battle of Broccoli Plain” by Djuna
“Roadkill” by Pak Min-gyu
“Where Boats Go” by Kim Jung-hyuk
“Our Banished World” by Kim Changgyu

South Korean science fiction is rarely published in English and when I heard of this anthology, I was curious to see what sort of take they had on the genre.

“Readymade Bodhisattva” by Park Seonghwan is set in a Buddhist monastery where robots are used for various tasks. One robot named Inmyeong starts giving sermons, claiming to have achieved enlightenment as its “flexible thinking” caused it to possibly develop a consciousness. A technician is there to determine if that’s true. I think the story suffers from too much talk (something I see in many of the stories in the anthology) as people discuss the meaning of this and how to take action.

“Empire Radio, Live Transmission” is an accurate description of the story by Choi In-hun: a transmission from a governmental radio station, celebrating twenty years after they had been defeated and were able to rise again. The problem is the story is nothing but a massive dump of information, with little sign of a human element. I found it very hard to keep reading and it goes on far too long.

Jeong Soyeon contributes “Cosmic Go,” a story whose protagonist dreams to be part of the space program and go to the moon and works until it is within her grasp. But tragedy strikes, leaving her paralyzed and crushing her dream. But factors put it back within her grasp. It’s all intertwined with the game of Go as a metaphor for her life. The story has a lot of emotional power and is one of the stronger entries in the anthology.

“Along the Fragments of My Body” tells the story of Sweeney, a robot who is trying to become an artist. She observes the work of another robot artist, Viennese, whose art consists of presenting components that have been replaced. When Viennese’s CPU is displayed, Sweeney finds herself on board the Ship of Theseus/Grandfather’s Hammer/etc. It’s a longstanding debate whether something is the same if parts of it have been replaced. Bok Geo-il basically shrugs his shoulders. It’s probably a wise decision philosophically, since people have been debating it for over 2400 years, but not very good dramatically.

Lim Taewoon portrays a novel form of alien rite of passage in “Storm Between My Teeth.” The Kreñawians place 38 of their boys on backward worlds as natives, and then, once they reach adulthood, they seek each other out and fight to the death until only one remains. Jamui is one of these warriors, in the form of a Masai warrior, and has reached the point where there is only one rival left, who he tracks down to South Korea. But this rival poses a problem that even Jamui’s many skills can’t fix. I liked the imagination shown as well as the way the story twisted away from its premise.

“The Sky Walker” by Yun I-hyeong is set in a post-nuclear world. Society is back to normal, and a major sport is trampolining, which was at one time banned by the religious authorities. Privet loves the freedom of jumping on the trampoline, and, as she becomes more and more adept at it, begins to realize it allows her to control gravity. Privet is a strong character, but the story never catches fire.

“Between Zero and One” talks about the concept of a time machine that transfers your consciousness to your past or future. It is definitely an idea story, but it’s far too theoretical to really be anything more than talking about the idea without showing it. Kim Bo-Young mostly just contemplates the idea and some of its ramifications without really showing any conflict or emotional resonances.

“The Bloody Battle of Broccoli Plain” by Djuna is an alien invasion, where mechanical devices start colonizing Earth, without a word as to their intentions. Eventually, humans discover their ships will take them to other worlds. Joengsu is now on one of these worlds, one with what looked like it had plenty of food, all of which turns out to be inedible, including a creature that reminds him of a broccoli. The story has some of the earmarks of space opera, but never really comes together.

Pak Min-gyu‘s “Roadkill” starts by focusing on Mao, a machine whose job is to clear up dead animals—and sometimes people—on a highway that surrounds a city. He discovers a baby that has somehow survived. We then cut back to Li, a man who tries to make a living playing Russian roulette, getting money if he doesn’t kill himself, but plots his escape by crossing the road surrounding the area. The two stories intersect. It an interesting concept but the ending is more philosophical than a resolution.

“Where Boats Go” by Kim Jung-hyuk is an account of a strange alien invasion, started by silver ships sending down devices that create holes that suck people into them. The survivors are herded toward the sea, where they are left with no explanation. The narrator describes the events, and we also see his emotional journey as he grows close to one of the others involved. This is the most successful and memorable story in the anthology, with some strong human emotions in the face of an incomprehensible mystery.

Kim Changgyu shows “Our Banished World” where Jaeyoung, a teen girl, discovers her father has cheated on her mother. But as they investigate, she slowly begins to realize that it’s not straightforward, and nothing at all what she thinks. The idea, alas, is not a particularly new one, but Jaeyoung and her friends search for the solution and keeps you involved, and the resolution does break some new ground instead of it just being a revelation story.

It’s arrogance to generalize on the state of science fiction in a place outside the US from a single anthology, and I’m not going to try. I do notice certain trends, though. Most obvious is the reliance of telling instead of showing. All the stories here have long passages explaining the situation and background; the best of them integrate the information dump better. In that way, they are like the beginnings of the science fiction genre in the US. There’s also a slight trend in resolving stories by creating a mood instead of actually resolving things and by raising a theoretical issue without dramatizing it. Still, there are some excellent stories here (and two novel excerpts) and if this look at the genre interests you, it’s a good place to start.