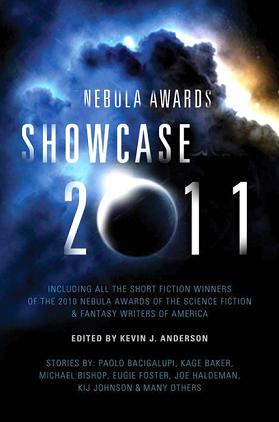 “Hooves and the Hovel of Abdel Jameela” by Saladin Ahmed
“I Remember the Future” by Michael A. Burstein
“Non-Zero Probabilities” by N. K. Jemisin
“Going Deep” by James Patrick Kelly
“Bridesicle” by Will McIntosh
“Spar” by Kij Johnson
“The Gambler” by Paolo Bacigalupi
“Vinegar Peace (or, the Wrong-Way, Used-Adult Orphanage) by Michael Bishop
“I Needs Must Part, the Policeman Said” by Richard Bowes
“Divining Light” by Ted Kosmatka
“A Memory of Wind” by Rachel Swirsky
“Sinner, Baker, Fabulist, Priest; Red Mask, Black Mask, Gentleman, Beast” by Eugie Foster
“The Women of Nell Gwynne’s” by Kage Baker

Ah, the Nebula Awards: that lovely award that recognizes all the best that SF and Fantasy have to offer.  2011’s volume (the inaugural volume from Tor, as a bit of trivia; though I doubt it’ll be a game show answer) contains the short story, novelette, and novella winners of 2010’s Nebula Awards, in addition to all of the nominees in the short story and novelette categories, respectively. One might reasonably expect that these stories would be the best that the genre has to offer—the veritable cream of the crop. But does 2011’s Nebula Awards Showcase live up to that expectation?

In a word: yes. And in another word… no. Hidden here in these hallowed pages is a collection of stories that really result in a mixed batch. All are technically flawless, yes. But subject- and execution-wise, the collection is polarizing at best.

I’m going to try to break it down here section-by-section. There’s a lot of material to cover.

Alright. The quality of the short stories varied greatly from one extreme to the other.  Stories are either extremely vivid and tangible—as in the fantastic opener “Hooves and the Hovel of Abdel Jameela” by Saladin Ahmed—or sentimental and almost lifeless like “I Remember the Future” by Michael A. Burstein.  And to see these pieces vary so drastically in not only subject matter, but writing style and general “feeling,” is jarring, to say the least.

Most of the short fiction deals with the theme of xenophobia and/or interspecies relations and trust issues, in some form or fashion. In the aforementioned “Hooves and the Hovel of Abdel Jameela,” the protagonist is a doctor directly confronting a species that he doesn’t know much about, and doesn’t trust. In “Bridescicle” by Will McIntosh—a disturbing little tale that takes the concept of mail-order brides to the cryogenic level—people from different times and places have to learn to trust each other, and even fall in love.  The winning story, “Spar” by Kij Johnson, takes the human/alien tensions to the next level, putting her human protagonist in an escape pod with an alien who rapes her repeatedly for an unspecified amount of time.

These were gently more varied as far as subject matter goes, but were uniform in that they were all “idea stories.”  All of the novelettes dealt with a more abstract concept told through some sort of plot device, and sometimes this device was almost abused. In Paolo Bacigalupi’s, “The Gambler,” the main character and his situation are used as a sort of commentary on media and journalism of the future. Michael Bishop’s, “Vinegar Peace,” is an exploration of grief through the strange concept of an adult orphanage.  Even the winning story, “Sinner, Baker, Fabulist, Priest; Red Mask, Black Mask, Gentleman, Beast” by Eugie Foster, while being a spiffy dystopian tale, deals simply with the concept of personal identity (or the lack thereof).

As far as these go, we only get to see the winning story, which is delightful and lighthearted and doesn’t seek to take itself too seriously. “The Women of Nell Gwynne’s” by Kage Baker is a personable and quick read about a bunch of high-class steampunk prostitutes. It seems to strike the ground in the wide berth between the short stories—which were all snapshots into other worlds—and the novelettes, which were mainly idea driven.

These three categories make up the bulk of the book. Although there is the nice, almost anecdotal reprint “A !Tangled Web” by Joe Haldeman, SFWA‘s newest Grand Master—and a few prize-winning poems in the back of the book (which are definitely worth a read), one misses the usual insightful articles and essays by fellow SFWA authors on timely and important issues of interest to the SF field–its trends and directions–that have graced the majority of previous volumes, and has chosen instead to return to its origins and focus on the fiction exclusively (aside from the poems), much as did the first four volumes when first introduced in the 1960s. Whether future editors will continue this retro-trend only time will tell. That said, and all in all, The Nebula Awards Showcase 2011 is a nicely edited volume where 80% of the stories are worth reading. But I wish we could’ve seen more content from certain neglected categories. Perhaps a short excerpt from Paolo Bacigalupi’s winning novel The Windup Girl, or the same from the award-winning screenplay to District 9.