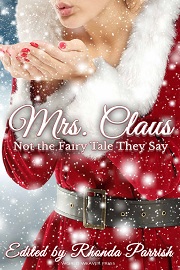 Mrs. Claus: Not the Fairy Tale They Say

With one or two exceptions, these aren’t the kinds of Christmas stories you share with elementary school children. Created as antitheses to the always supportive, cookie-baking, elf-nurturing Mrs. Clauses to be found in Rankin-Bass specials or standing next to Santa on the holiday parade floats, Ms. Parrish wanted to see stories featuring Mrs. Claus as an essentially independent woman of action with her own backstory. Santa, when he appears, tends to be more obviously loving and perhaps a bit hapless. He’s the nurturing one. She’s the one who takes care of business, sometimes with lethal weapons.

Of the 14 stories contained within, there are some gems that belong on the “Nice” list. Andrew Wilson’s tale leads readers into a magical world where Nikolaos and his otherworldly Lady inhabit the fairy realm. Unfortunately, her still-mortal (though aging slowly as one does in those parts) love goes back to our world with such regularity that “Unexpected Guests” have learned to use his magical road to invade the Realm. The Lady Elora is not pleased. The magic is consistent and intriguing in this one, and the fey, understandably, act like fey.

It’s easy to get caught up in M.L.D. Curelas’s “Shouldering the Burden,” a steampunk tale. Santa’s wife Phaedra is returning to her home country of Greece aboard the airship Northern Queen. She’s on a gift-bearing assignment, this woman with a stout, matronly figure and a warm smile, with hair “shot with strands of iron-gray and pinned up in a complicated knot.” Torn between a desire to linger in the beautiful country and the duty to return to her beloved husband in the frigid North, Phaedra does not expect her gift delivery to be quite so fraught with peril. The vivid fight scenes are well done.

Maren Matthias’s “You Better Watch Out” gives us a loving and capable and rather lovely Mrs. Claus who is a bit of a Jane Bond—in the service of children, of course. It’s a pulp tale, and a lot of fun.

The Mrs. Claus of Randi Perrin’s “Moves Like Jagger” is a witchy goddess and very much her own woman, dealing with her own issues—with the help of a rock music critic. Kristen Lee’s “Good Morning” is a beautifully written story of two people in love—and, more or less, frozen in time. “Christmas Magic,” by Jennifer Lee Rossman, shines with roughshod humor at first as it features a heartless fashionista Mrs. Claus, but, ultimately, it is the magic and love of Christmas that save an otherwise doomed Earth.

C.B. Calsing’s “The Asylum Musicale” was the most disturbing story in this collection, with many deliberately misleading cues for a hopeful resolution. While some in this collection feature aliens, weird science, romance, and steampunk, Calsing’s story is gothic horror with a twist of fantasy.

Anne Luebke’s “Captain Lizzie and the Stranger in the Fog” introduces an aging airship captain, who hates it when people make assumptions based on gender, volunteering to take a holiday shift, even with sky pirates a possibility, to avoid another too-sweet holiday with her nephew, his new husband, and their kids. But she’s about to be surprised by an encounter with a most unusual pilot—being led by a shining red light.

The first story in the collection, Laura VanArendonk Baugh’s “Wight Christmas,” seems akin to the Harry Dresden novels, but, rather than a council of wizards, there’s a council of immortal people representing holidays—including Administrative Professionals’ Day. This Mrs. Claus is a salty-talking Valkyrie whose key values include environmentalism and anti-capitalism. Here’s a story heavy on the gore and light on the Christmas spirit as she and a strangely charismatic, undead comrade deal with a mastermind who is making illicit use of small, fiendish spirits.

There are some other surprises in this very catholic collection where God or his saints are seldom mentioned. Jeff Kuykendall’s “Agatha Sings to the Scorpions” makes the red-suited pair part of an intergalactic peace corps of sorts. In simplest terms, they are the official, political gift-bearers to children, including alien children. This doesn’t go down well with the hate-mongering, xenophobic terrorists. An obvious political parable, it is what it is. It is well-written.

The two gentler tales show us a Mrs. Claus who is more traditional, at least outwardly. DJ Tyrer‘s “Desperately Seeking Santa” finds the rather chauvinistic elves foolishly dismissing Mrs. Claus’s offer to help when Santa goes missing. She may be sweet and arthritic, but she’s one determined elderly lady, and she swings a mean poker.

Ross Van Dusen‘s “The True Story of Christina and Kristopher Kringle” tells of the gentle story of how Kris met his childhood sweetheart Tina. Tina’s the one who has the plans and the brains and the magic. Somewhat clueless and easily contented, toy-making Kris is okay with that—and everything else Tina suggests.