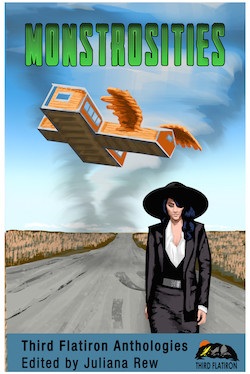 The stories in this anthology deal with the theme of monsters in a variety of ways. Some are about creatures of vast size. Others deal with unnatural beings. A few reveal how people can be the greatest monsters of all.

The protagonist of “Chicken Monster Motel” by Keyan Bowes is a young man who purchases a motel that can fly. Complications ensue for the fellow and his beloved. This absurdist romantic comedy is silly, but pleasant to read.

In “Five Billion Pounds of Soul” by Larry Hodges, a god-like being called Big Gal rules the universe. She forces the protagonist, an alien snatched from his home world, to accept human souls into Hell. When she reveals a plan that will destroy the Earth, he must use all his cunning to avoid taking on the impossible task of dealing with all the souls at once. The enormous scale of this cosmic farce is impressive.

In “Sacrifice Needed, Alcohol Provided” by Carl R. Jennings, a man who has set up a phony cult performs a human sacrifice to impress his followers. By coincidence, an alien shows up with its own motives. The sudden change from horror to light comedy is jarring.

“#NotAllTigers” by Mark Pantoja features a tiger who speaks, wears clothing, and can walk on two legs. He becomes the narrator’s roommate for a while, but soon goes off on his own in an unexpected manner. The target of this lightly satiric tale is the way in which people stereotype those from different cultures.

The title character in “The Doomsday Machine Retires” by Ray Daley is a sentient space vessel. Over thousands of years, it has been equipped with enough weaponry to destroy the universe. It must outwit its commanders in order to save itself from the impending apocalypse. This wry story takes a jaundiced look at militarism.

“Alien TV Shows Are Bad for Your Eyes” by Brian Trent is a madcap comedy in which television broadcasts from another planet cause grotesque changes in humanity. The story moves at a rapid pace, but the humor is sophomoric.

More of the same appears in “Got Them Wash Day Blues” by James Dorr. A gigantic pile of dirty clothing transforms into a monster. A police officer who works for the Laundry Division must deal with the menace. Readers who enjoy slapstick may find it amusing.

After all these comic and satiric stories, “This Tyrant Crown” by Liam Hogan provides a change of mood. The narrator is a dying king. As a young man, he received the crown from the previous king on his deathbed, although he was not a member of the royal family. In this fantasy world, the crown itself is the source of unlimited control of the realm. The narrator relates his story to his young daughter, leading to a grim conclusion. This is a dark and powerful tale of the way in which power corrupts.

“The Great Mall” by Salinda Tyson takes place in a future of extreme consumerism. It follows a mother and her children on a typical day of shopping. The logical but surprising climax of their obsessive buying carries a biting message about the importance of constant purchasing to the modern economy.

The title of “Skywalker” by Jennifer R. Povey refers to an enormous robot, controlled by a human operator who rides inside it, which battles other robots in sporting events. When it vanishes, the operator has to figure out how such a huge object could disappear. This is a simple story, without much to it besides its basic concept.

“Eaten” by Ville Meriläinen takes place in a strange version of the modern world in which pigs are fully sentient. They have their own form of government. War threatens to break out between humans and swine. The narrator is a porcine politician who reveals the secret motive behind his actions. Despite a premise that might have been ridiculous, this is a serious story, which may haunt the reader’s imagination.

“Into Xibalba” by Sita C. Romero makes use of Mayan mythology in a tale of courage and sacrifice. A pregnant woman has a fatal disease, caused by demons. She travels to the underworld to save the life of her unborn child. The author creates a compelling and inspiring story of triumph over evil.

“The Emerald Image” by Martin M. Clark involves a peculiar kind of time control, in which technology of immense proportions can change the present without true time travel. The only point of a great deal of technobabble is to end the story with an allusion to a classic rock song.

“TidBits” by Sharon Diane King is a macabre twist on a familiar fairy tale. A global catastrophe releases into the world creatures who feed on people. A clever old woman lures two of these beings into a trap. Readers who enjoy gruesome stories with a touch of wit will appreciate this black comedy.

In “The Catacombs of Constitutional History” by Julia August, deadly monsters inhabit the libraries where students must go to do their research. The narrator plots to win success as a scholar without dying. This offbeat fantasy takes a satiric look at the hazards of academia.

The anthology concludes with four brief stories, given the group title “Grins & Gurgles.” In “New Shoes” by Robert Bagnall, an elderly woman tells her grandchildren about the old days, when people had to leave their homes to do things. This story ends with a memorable punchline.

In “Kismet” by Barry Charman, the Devil goes into a bar full of other archetypical beings to bemoan his fate. This is an odd theological fantasy. The author’s intent escapes me.

In “They Saw Me Coming” by Russell Hemmell, a genetically enhanced roach returns from space, where scientists sent it as an experiment. The unpleasant results come as no surprise to the reader.

In “Bigger and Better Things” by Joseph Sidari, an insect turns into a man. This humorous inversion of a famous literary classic ends the volume on a lighthearted note.

Victoria Silverwolf would like to point out that this anthology also contains a reprinted concrete poem by the late, great Edward Bryant.