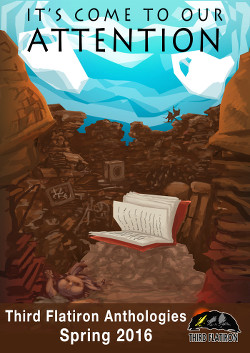 It’s Come to Our Attention

“Surplus Army” by Pauline J. Alama
“Agents of the Volurian Empire, Help Is on the Way!” by James H. Zorn
“Midnight on Addison Street” by Wendy Nikel
“Time’s Winged Chariot” by Philip Brian Hall
“Spirit Cat” by Hunter Liguore
“Ice-Cold” by Nyki Blatchley
“Chocolat” by James Dorr
“The Thing Is, the Basement” by Greg Beatty
“The Wishing Well” by Terri Bruce
“The Argentine Radio” by Joel Richards
“All True” by Marie DesJardin
“The Translator” by Arthur M. Doweyko
“Something in Forever” by E. M. Eastick
“Déjà Vu” by Lisa Timpf

This issue of Third Flatiron Anthologies seeks to shine a light into the dark corners of everyday life, illuminating those little events having a big impact on the larger world. Some of the following stories do just that, while others miss the mark. That’s okay, as even the misses are worth reading.

Take Toy Story, add in a little Small Soldiers, and you have the basis for “Surplus Army” by Pauline J. Alama. Here it’s all cast-offs, rather than just old toys.

This is a neat little fantasy about those things we throw away, poking at our disposable culture. What’s discarded, though, is not always something so tangible as mere trash.

“Agents of the Volurian Empire, Help Is on the Way!” by James H. Zorn, is the first-person narrated story of the titular Volurian, Joseph, searching for an Acturian agent hidden among humans on Earth. Or not. He could very well be an escaped mental patient about to kill an innocent man.

Skilled readers will notice I didn’t mention the genre of this piece. That’s because, like Schrödinger’s cat, choosing one forces the central question of the story, and kills the effect. Having read many such stories, I was expecting an obvious place where reality tips in one direction or the other, but Zorn skilfully handles the balance well enough so that I’m never quite sure, even after the story ends. Well done.

“Midnight on Addison Street” by Wendy Nikel is a murder mystery told from the point of view of the victim, pre-murder. Someone is trying to kill Lawrence Berkles, but the path to discovery is not only convoluted, but recursive. Like every good mystery, all the clues are right up front.

This is another well-told tale that makes for a good read. Sure, we don’t learn anything about how Lawrence discovered someone wanted him dead; and yes, the plot depends on characters acting in just the way the killer hopes, but it’s still a fun read nonetheless.

How did the French Revolution really start? And who, exactly, was Maximilien de

Robespierre? Philip Brian Hall’s, “Time’s Winged Chariot” attempts to answer those questions, but ends up raising a few of his own.

Time travel stories are hit-or-miss affairs, and this one was more of a miss for me. If a causal loop is to be your central point, fine; but it should never be a mere artifact of the plot.

Hunter Liguore with “Spirit Cat” explores the nature of man’s obsession with “what he does” rather than “what he is.” In this fantasy, Jay Willowby is a street artist, not unlike Banksy, who one day discovers that he has a gift for painting the dead. As in “I see dead people” dead. They come to him begging to be immortalized on canvas, and he becomes rich in the process. All good things must come to an end, and he runs from the world to be a recluse in the jungle.

Liguore explores the artist’s need to create art with this work, ultimately landing on “you are what you do.” This is a nice story with little action and even less dialog. A good read, regardless.

advertising. Steve, along with Claire, is about to discover something strange about the June snowstorm. What’s that got to do with advertising, you ask? Grab a cold beer, pull up a chair, and Steve will give you the details.

Who and why? That’s all I could think of after reading this story. Who did it, and why? Two question that never even sniffed the scent of an answer. That’s good. Leaves a lot of room for a reader to fill in the details. Well done.

“Chocolat” by James Dorr is a bit of flash fiction also about the death of quality due to big business and advertising.

I mostly hate flash fiction as a reviewer. Not because it’s bad—it’s not—but because it often takes more words to describe than were in the story to begin with.

“The Thing Is, the Basement” by Greg Beatty begins as Horror, but ends up as SF. Chris has a job in his family—going down to the basement to get things. Sometimes there are even stairs!

Beatty does a masterful job of capturing what it is like to be poor, and keeping that secret from your friends in school. But keeping secrets exacts a price of its own, and children should never be placed in such a position. Recommended.

Why are there so many wishing wells in the world? Terri Bruce answers that burning question in “The Wishing Well,” a bit of Horror for broad daylight. Traditions have their beginnings, and sometimes it’s as simple as keeping the horrors at bay.

With no dialog or action, this story kept me interested from beginning to end.

“The Argentine Radio” by Joel Richards is another fantasy story of obsession. This time it raises it’s ugly head as the mythical Zahir in the form of a coin. That’s the set-up, but once again the evil advertisers and business are the real problem.

With this story, Richards introduced me to the poet and writer Jorge Luis Borges, and that’s worth the read all on its own.

If it’s on the internet, it must be true! “All True” by Marie DesJardin is another fantasy about the things people are willing to believe, though—sometimes—what they believe is, indeed, true. Alyssa knows she is going to be fired from her job as a Soup Taster, but then she remembers an old junk email that just might save her career.

I’m sensing a pattern in these stories. This one is cute and fun, though, and moves quickly to a satisfying conclusion.

What if we could all understand our pets? Not like the usual scratch at the door to go out, but their thoughts as words, a la Dug from Up. In the mild SF story, “The Translator” by Arthur M. Doweyko, young Gerrard Plotkin invents not only a translator for pets, but as a bonus gets a human lie detector. Not every lie needs to be exposed, though, and sometimes it’s better to believe a lie than know the truth.

This is another cute and fun story, with an ending straight out of my pre-teen daydreams. Good read.

Something is affecting the blackberries of the bushes around Sal’s home, and her mother knows just the right recipe for berries so special. In “Something in Forever” by E. M. Eastick, Sal learns that time moves differently for an immortal.

Obsession can be about anything. For Sal, the obsession is knowledge. This is a very good story, but I want to know more about the ash.

Remi needs a diversion. Luke Jurgens, even from afar, is ready to oblige. “Deja Vu” by Lisa Timpf is an SF story ostensibly about cloning, but really is about two people and the routines they can fall into. Society can fall into routines as well.

There is a lot of metaphor flying around in this story, hinging on the concept of double, and it’s this type of writing I enjoy most. Give me something to mull over outside the concepts. Good job.

Clancy Weeks is a composer by training, with over two-dozen published works for wind ensemble and orchestra—his most recent, “Selene,” premiered in Houston on April 3rd, 2016—and an author only in his fevered imagination. Having read SF/F for nearly fifty years, he figured “What the hell, I can do that,” and has set out to prove that, well… maybe not so much. His first short story, “Zombie Like Me,” will appear in an upcoming issue of Stupefying Stories. He currently resides in Texas, but don’t hold that against him.