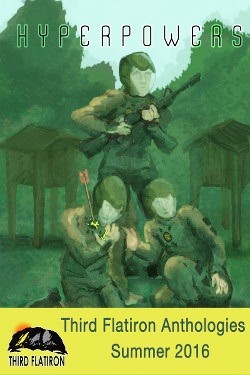 Billed as an anthology of military SF and space opera, Hyperpowers is wide-ranging. Out of 15 stories, six, maybe seven are about warriors at war. But the rest cover empire, royalty, the aftermath of war, the brink of war, the edge of possible war, and in one cunning surprise case, the very dawn of war.

“Grid Drop” by William Huggins features soldiers in a war for planetary survival – literally. They’re not up against invaders, per se, but despoilers, out to wreck the biosphere for their own selfish ends. Or are they? Our heroine, Celeste, is tired of the war but willing to win it, for her planet, for her lover, and because her cause is just that important. And, raised in it from childhood, she never considers it might be wrong.

The beautiful but haughty space princess is the fulcrum of “Between Two Heartbeats” by Jonathan Shipley, without being its focus. Yes, she causes everything that happens in the story, but this tale is about the people it happens to, both hero and annoying busybody. If they make one wrong move, they’re dead … and there’s no telling what the princess will consider “wrong.”

Dirt’s not just something to dig holes in, soldier. It’s the prize for ecological startups spreading life to the sterile stars, it’s the sea in which killer submarine aliens hide, and it’s the six feet plus that covers your grave if you make the slightest mistake hitting the “Dirt Moon” by Dan Koboldt. As the editor says in his intro, think Tremors in space … and make it sting.

The Terminators aren’t as frightening when they’ve lost. But if they’re smart, they’ll go underground and stay quiet, as in “The Silicates” by John M. Campbell. A machine intelligence can be very good at hiding, especially among the ruins of lesser machines. And once the heat is off, it’s not going to be grim assault commandos hunting them down, but regular guys looking for a paycheck, and maybe not taking all the precautions they should.

So you’ve conquered the universe. Think that might have something to do with why you can’t sleep? The client in “Dreaming Empire” by Mark Rookyard wants absolution, or at least amnesia, from his dream counselor. Buyer and seller each want something different out of this dream-surgery, and though they both get it, one of them can’t escape his future. The McGuffin is never resolved, but it’s a McGuffin – its only function is to get the players chasing it. If the phrase “open-ended closure” made any sense, I’d use it here.

“Symphony in First Contact, Hostile” is about an alien invasion by little green men. Sam Bellotto, Jr. takes that template and asks how it would feel to take part in a War of the Worlds, but one in which the aliens can talk before you kill them. Reluctant and accidental warrior Ezekiel Flummer’s sufferings are a familiar staple of war stories; they don’t acquire any freshness, though, from being transposed into an alien-invasion key.

This is a print anthology, but it hardly needs a soundtrack for Erik B. Scott’s “Duck and Cover.” If you’re not old enough to remember the grainy black-and-white civil defense films that implied a grade-school desk would stop an atomic bomb, you probably remember the Atomic Café and similar resurrections of high-Fifties Cold War camp. And its catchy tune is everywhere! So how do you prepare for a Martian attack, kids? Sing along with me … “Duck … and Cover!”

There was far too much shipboard jargon and military bridge-chatter in “Outer Patrol” by E. J. Shumak. Yes, it gave an immersive feel of space-naval operations. But unless you know the lingo cold (and since this space navy is fictional, you don’t), it’s hard to tell what’s going on. A second reading made everything clear, and the climax is pretty clever, set up early on by the navy’s focus on paying for their operations. A neatly crafted short story, but the style gets in the way.

One species lives, another dies. Does that make the survivors a master race, or the losers alien scum? A loyal “Child of Soss” comes face to face with the horror from Earth in Brandon L. Summers’ story of race, refugees and the power of hate. It’s not the author’s fault that this theme has been done to death, but the clichéd characters and emotional shifts never come to life.

“The Mytilenian Delay” by Neil James Hudson posits a tradition of blowing up entire inhabited worlds to maintain an Empire. Partly technical, partly traditional, a delay is built into the destruction ritual, to give the Empire time to change its mind. In real life, Mytilene was spared because Athens countermanded the destruct order just in time. Will the Captain spare a possibly-innocent world this time? The twist, when he reaches his decision, is delicious, reminiscent of Eric Frank Russell.

Comic war stories are a rarity, but “Kill the Coffee Boilers!” by Robert Walton deserves inclusion in their ranks. The quote is from Chancellorsville, where Stonewall Jackson surprised the Yankees at their breakfast. Well, the guardians of the Lankhmar system don’t have any Jacksons, but then, they’re not up against Fighting Joe Hooker, either. In fact, Lieutenant Gingrich isn’t up against anyone at all, really. So why is his leg so far away from the rest of his body? Strategy and tactics of the absurd with just enough weight to keep it from being silly.

I’ll admit it – I thought “Alien Dreams” by K. S. Dearsley was another tired idea making its latest turn. But the obvious (given away by the illustration afterwards, if you hadn’t tumbled already) isn’t the twist here. And the slow-motion romance of Eyak and Orro is charming enough that you stop looking for the twist, so when it comes, it’s a thunderbolt. A hint isn’t a spoiler, so I’ll just say that the sounds of the alien characters’ names make perfect sense once you realize what’s going on. It’s not military sf, and arguably not space opera, but it is in space, and it’s definitely cool.

How many times have you heard “I don’t need a weapon. I am a weapon”? Seems like every new SF writer springs this trope as if no one has ever heard it before. But don’t flinch from “Yesterday’s Weapon,” because Noel Ayers does something truly unexpected with the human-become-weapon story.

Elliotte Rusty Harold shows us a desperate space miner under the gun in “Claim Jumpers.” The only thing that can power the universe of the future is exotic matter from brown dwarf stars. There aren’t but so many of them out there, though, so mankind isn’t the only interested party. Like the Western, the war story is often used to tell straightforward tales of survival, bluff, fortitude and deception. This one combines themes from both, and it works.

So the coldly correct, borderline aggressive Russian spy officer is also an android? How would you be able to tell? That’s part of the hook of “Pre-emptive Survivors” by Martin Clark. The title doesn’t snap into focus until the last paragraph – it’s a good reveal, but the lead character is thoroughly unlikeable. Not a deal-breaker for some readers, of course.

Full disclosure: “I’ve Got the Horse Right Here” by Art Lasky isn’t military SF. It’s listed in the table of contents under “flash humor,” and it’s really funny. Heck, I may use it as a filler the next time I emcee a talent show, and the kids can’t get their amps set up in time.