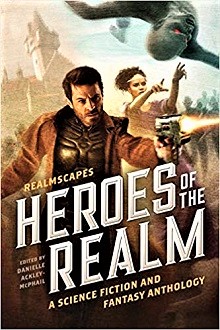 Heroes of the Realm

“Ashling and the Little People” by Kathy Tyers
“The Tea Dragon” by L. Jagi Lamplighter
“The Fire-Proof Man is Dead” by James Chambers
“The Garrison Holds” by Steve Rzasa
“Where Monsters Wait” by Gabrielle Pollack
“Will o’the Wisps” by Wayne Thomas Batson
“The Devil in the Details” by Danielle Ackley-McPhail
“Glint Starcrost and the Ice Prison” by Paul Regnier
“Hard’s Watcher” by Kerry Nietz
“The Librarian Who Would Be King” by Teisha Priest
“The Brick” by Jeffrey Lyman

“Ashling and the Little People” by Kathy Tyers

The eleventh century son of a blind bard is the hero in this SF short. When local Irish ruffians ambush him with his Da, Ashling is literally ‘lost for words’.

They intend to burn him and a leprechaun at the stake. To save himself, Ash must recite some words, but he is a life-long stutterer and cannot get a single word out. Can he find a cure in the short time he has left?

The story had plenty of action, but the prose was average and at times slow.

In this short fantasy, a wise father sends his youngest son, Ulysses, on a mission to capture a black tea dragon. Ulysses is a self-proclaimed dandy, and the thought of a trip into the 19th century Chinese hinterland is far from his idea of a good time. But his father offers him a prize to make it worthwhile.

Though Ulysses learns much about the tea making process, he is too lost in his biased views of life to realize the true value in the trip. But then one day, as he thinks he’s dying from a snake bite, he learns the most valuable lesson of them all.

At times the story was slow and predictable, but the ending had a cathartic feel.

“The Fire-Proof Man is Dead” by James Chambers

The city of New Alexander has a string of short-term superheroes doing good deeds in this short fantasy. The superheroes rescue people from a sinking ferry, a burning factory, and a runaway balloon, only to die soon after.

Private detective Garvey sets out to find out what is happening. He discovers that each superhero used the opportunity to also complete some super-human feat to steal a historic artifact. Now he must find out why.

This was a throwback to stories from the pulp-fiction days, except it lacked a well-constructed plot.

“The Garrison Holds” by Steve Rzasa

Tobias is a member of the Garrison, a group that’s a guardian for mankind and works to prevent armed conflict. Tobias watches as the war of 1812 draws to a close, but Fitch, of the ashen, is intent on stirring up the war anew and changing the course of history.

Tobias cannot actively help either side in the war, he can only work to prevent bloodshed. But Fitch has boasted of a plan to fire up British hatred and scuttle the peace plan. Can Tobias stop him?

This was a choppy story that was hard to follow at times and offered little in the way of new ideas for its genre.

“Where Monsters Wait” by Gabrielle Pollack

When Lyric sees Atlas injured by wolves on a stormy night, she gives no great thought to it, helping her aunt keep Felix away from the injured village nut. But when she sees Atlas’ black blood, and hears the cries of the monsters, she begins to doubt the know-it-all grownups.

The plot had a slow buildup that was hard to grab onto. Several gramma errors were a distraction too. The last third was engaging.

Batson’s short fantasy tells the story of Stoker, a tenth-grade boy who’s fascinated by the paranormal. When his school plans a trip to Camp Lett’s, the location of the famous Edgewater will-o’-the-wisps, Stoker is ecstatic.

Armed with ghost catching paraphernalia he bought online, Stoker hopes for a thunderstorm since this brings out the mysterious glowing globes. But when he gets the storm he hopes for; the truth is far scarier than the myth.

This was an entertaining story that was easy to read. The speculative elements, however, were light.

“The Devil in the Details” by Danielle Ackley-McPhail

Camden sees his insane mother taken away wearing a strait jacket in this short fantasy. Her spirit remains, connected to the spirit of the trees, and now the school bullies want him to touch the most dangerous tree in the county, called the ‘Devil’s Tree’.

When he finally does pluck up the courage to touch the tree, that’s wrapped in a chain-link fence, his real troubles begin. The tree changes him, and his paternal grandmother doesn’t approve.

The prose was easy to read but the plot was too predictable.

“Glint Starcrost and the Ice Prison” by Paul Regnier

In this action-packed SF short, former partners drop Glint off on a prison planet where he’s locked into a hollow cube of ice. Ahead of him, in her own cube, is a golden woman; and behind him is a talkative cyborg.

As the planet’s machines transport their cubes to the main prison building, the cyborg claims to have the means of escape. And then the cyborg forces Glint into its hair-raising escape plan against his wishes.

This story had a pulp fiction feel to it. But, unlike the good classics, this one was long on cliff-hanging action that seemed to pop out all over, and short on plot integration.

Hardcandy becomes the first female debugger in this SF short set in the near future. She has a special implant that allows her unfettered access to all smart devices around her but inhibits her actions so she cannot harm anyone with her powers.

When her boss directs her to help his son, she is concerned. The son directs her to unpack and assemble an old-fashioned robot. But as she works, Hardcandy feels unwanted eyes on her. Is the son a voyeur? Her programmed inhibitors limit her ability to protect herself.

This was one of those pleasing and easy to read character-driven stories that concealed its ending twists well.

“The Librarian Who Would Be King” by Teisha Priest

After a coup, Crown Prince Rylan is slated for execution in this SF short. A young woman, Lili, is persuaded to help him escape in the hope he’ll overthrow the Prime Minister who framed him. But Rylan has little interest in being a king. He would rather be something more mundane, like a librarian. As they flee to the edge of the commonwealth, can anyone convince the prince to fight for his own rights?

This was a fast-paced story with a superficial plot that limited itself to the main points without digging deeper. Nonetheless, it was an entertaining story.

“The Brick” by Jeffrey Lyman

When an explosion gravely injures his commander, Ange must take over rescuing colonists in this SF novelette. The last of humanity is stranded on this mysterious giant space station along with many other sentient species. The bug-like Verj have gone on the offensive, trying to kill all other lifeforms on the station. The Verj trap a hundred thousand humans.

After tens of small rescues, the one chance of getting the last thirty thousand out is to use the new and untried cargo ship aptly called the Brick. The bigger issue is that the Brick must make two runs, and the Verj will be waiting for that last run across their territory.

This was an interesting fast-paced story with well-developed characters and some interesting concepts.

Heroes of the Realm was an eclectic mixture of science fiction and fantasy stories. The overall quality varied widely, with several engaging stories.