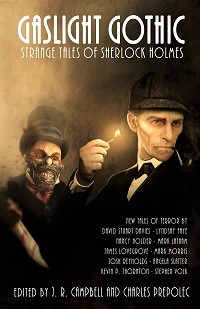 “The Cuckoo’s Hour” by Mark A. Latham
“The Spirit of Death” by David Stuart Davies
“Father of the Man” by Stephen Volk
“The Strange Case of Dr. Sacker and Mr. Hope” by James Lovegrove
“The Ignoble Sportsmen” by Josh Reynolds
“The Strange Adventure of Mary Holder” by Nancy Holder
“The Lizard Lady of Pemberton Grange” by Mark Morris
“The Magic of Africa” by Kevin P. Thornton
“A Matter of Light” by Angela Slatter
“The Song of a Want” by Lyndsay Faye

The editors present the fourth in a series of anthologies that confront the Great Detective with the fantastic and the terrifying. In this volume, the authors take their inspiration from Gothic fiction of the Victorian Age.

“The Cuckoo’s Hour” by Mark A. Latham is a complex tale of greed, jealousy, family secrets, and murder. A wealthy man is killed in a strange way. He leaves a series of puzzles for his heirs. Whoever solves them will find the treasure hidden inside his bizarre mansion. Complicating matters is the alleged presence of a supernatural being. The man’s niece consults Holmes and Watson when a cousin goes mad and another disappears after they sought the fortune. The many strange elements in this story create an eerie mood, but do not always work well together.

In “The Spirit of Death” by David Stuart Davies, two men are killed in a way that suggests the work of an invisible strangler. Both were strong critics of a man claiming telekinetic powers. Holmes and Watson visit the fellow, decide he is the murderer, and set a dangerous trap for him. The identity of the killer is revealed quickly and the plot is simple. The only suspense created in the reader’s mind is wondering how justice will be done.

“Father of the Man” by Stephen Volk is narrated by Holmes himself. As a young student of criminology, he serves as an apprentice to Edgar Allan Poe. It seems the famous writer faked his death many years ago, and now lives in Paris under a false name. When an American detective arrives, seeking the whereabouts of the man whose identity Poe stole, the pair concoct a macabre plan to conceal the truth. This story is more concerned with Poe than with Holmes. Any other narrator could take the place of the Great Detective without changing the plot. A twist involving the truth about the American seems out of place.

Readers familiar with Nineteenth Century literature will recognize an allusion to a classic in the title of “The Strange Case of Dr. Sacker and Mr. Hope” by James Lovegrove. Watson observes a strange change in the personality of Holmes. Meanwhile, someone is murdering criminals. The revelation concerning these events is not surprising. Those who admire the two heroes will find the ending distressing.

“The Ignoble Sportsmen” by Josh Reynolds involves a secret society of hunters who stalk humans as their prey. Holmes and Watson investigate the mysterious deaths of the members of this sinister club. This tale of supernatural revenge brings back a character from “The Adventure of the Red Circle,” one of the original stories by Sir Arthur Conan Doyle. This fact will be of interest to Sherlockians, but is of little importance to the plot. Overall, this is a typical horror story.

“The Strange Adventure of Mary Holder” by Nancy Holder is a sequel to Doyle’s story “The Adventure of the Beryl Coronet.” (No doubt the author was inspired by the fact that she shares the last name of a character in that tale.) Holmes and Watson track a missing woman who appeared in that adventure. This leads them into a strange affair involving con artists, telepathy, and a Gypsy curse. The story ends with a shocking discovery that seems to come out of nowhere.

It may surprise the reader of an anthology of fantasy stories that the title of “The Lizard Lady of Pemberton Grange” by Mark Morris is not literal. Instead, it is a metaphor referring to a coldhearted woman who always wears green. When she and her dog are found murdered, their heads cut off and removed, it is up to Holmes and Watson to solve the ghastly crime. An important clue is the fact that the woman’s maid reports seeing her headless ghost. This is a clever, if gruesome, story of bloody horrors and logical deductions.

“The Magic of Africa” by Kevin P. Thornton is a locked room mystery. A hunter is murdered in a seemingly impossible way. One possible explanation involves small demonic creatures sent by an angry witch doctor. Holmes offers an alternative solution to the crime, not involving the supernatural. Only at the very end does the reader learn the truth. This is a competent, if not outstanding, crime story.

Sherlock Holmes is only a secondary character in “A Matter of Light” by Angela Slatter. The true protagonist is a bold young woman who previously defeated Jack the Ripper in another story from this author. In this adventure, she helps the Great Detective solve the murder of a man found in his bedchamber with his throat cut. At his side was a strange young man in whom he had taken an interest. This obvious suspect protests his innocence. The solution involves a classic theme of fantasy fiction. The heroine proves to have greater deductive powers than Holmes. This story is likely to appeal best to fans of the author.

“The Song of a Want” by Lyndsay Faye is an unusual story in which Holmes appears under an assumed name. He becomes involved with a group of homeless urchins. A man claiming to be a doctor offers to take them in when they are ill. These patients always return from their treatments with their hair removed. The disguised Holmes discovers the weird truth behind the self-proclaimed philanthropist’s actions. This is a moody tale, which reads more like Dickens than Doyle.

Victoria Silverwolf has read enough stories about Sherlock Holmes to last for a while.