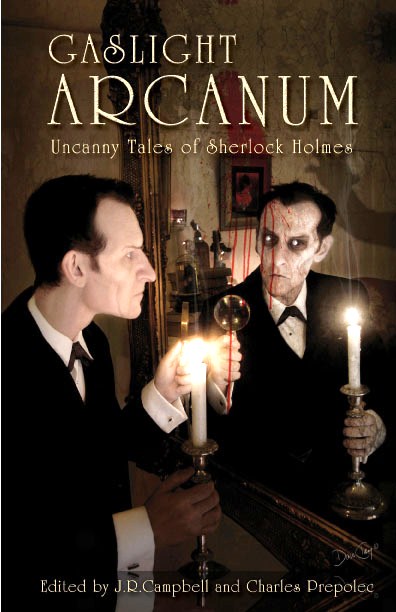 “The Comfort of the Seine” by Stephen Volk
“The Adventure of Lucifer’s Footprints” by Christopher Fowler
“The Deadly Sin of Sherlock Holmes” by Tom English
“The Color That Came To Chiswick” by William Meikle
“From the Tree of Time” by Fred Saberhagen (reprint)
“The Executioner” by Lawrence C. Connolly
“A Country Death” by Simon Kurt Unsworth
“Sherlock Holmes and the Great Game” by Kevin Cockle
“Sherlock Holmes and the Diving Bell” by Simon Clark
“The Greatest Mystery” by Paul Kane
“The House of Blood” by Tony Richards
“The Adventure of the Six Maledictions” by Kim Newman

“The Comfort of the Seine” by Stephen Volk evokes Holmes as a young man, on a trip with two friends to Paris.  Holmes opens his heart to a street vendor, a young woman who offers him a lily, along with the words, “elle mourra” or ‘it will die.’  When she disappears a few weeks later, he can’t let go of what might have been.  Sherlock finds her body in the morgue, with clues that lead him to Edgar Allen Poe.  Poe, it turns out, had faked his own demise.  Moving to Europe, he lives in obscurity, still fascinated by death and its causes.  Poe is relentless and logical, and exhorts Holmes to be likewise, in conjecturing the means of the woman’s passing.

This story is well done.  It’s evocative of the time and place, and credible as a foundation for Sherlock’s future endeavors.

Watson and Holmes head to the countryside in “The Adventure of Lucifer’s Footprints” by Christopher Fowler.  A groom has been murdered, and the only clue lies in strange hoof prints that have churned up the ground in only one spot.  They’ve appeared several times.  Watson is convinced they’ve been made by the devil’s steeds, but Holmes disagrees.

This tale has intriguing elements, and goes for the big picture message.  That’s something I usually find laudable, but this story lacks tension.

In “The Deadly Sin of Sherlock Holmes” by Tom English, Holmes must deal with the uncanny.  An ancient book, designed to carry holy scripture, was long ago perverted to hold a dreadful curse.  Anyone who reads one of its pages will be forced to commit a dreadful act.  The monks responsible for this book have lost track of it.  Holmes must first find it, and then destroy it.

Though the writing isn’t as polished as some in this collection, this tale builds tension with an engaging and original plot.

“The Color That Came To Chiswick” by William Meikle is phosphorescent green, and the goo has tainted the beer.  It’s nasty stuff, capable of eating a man’s flesh, and it strikes quickly.  As Watson learns, it can also affect the mind, rendering its victim unaware of his danger.  Holmes believes it’s an off-world visitor with some intelligence.  When the police flush it down the drains, he has to act fast, if he’s to protect London.

This is one of the weaker tales.  Despite the magnitude of the threat, the Holmes in this story strikes me as disinterested.

“From the Tree of Time” by Fred Saberhagen is one of my favorites.  Dracula recounts an occasion when Holmes contacted him, requesting a consultation.  A lady had been threatened by a former paramour.  The man was pure evil, with uncanny abilities.  In a fit of rage, she smashed his temple with a rock, and then dragged his body into a nearby storage room.  Though she locked the door, when the room was checked shortly afterward, there was no sign of the man.  The woman lived in fear that he had somehow escaped, and would return.  She asked Holmes to track him down.  Dracula explains how Holmes used his legendary abilities to bring the matter to a satisfactory conclusion.

In “The Executioner” by Lawrence C. Connolly, Holmes finds himself in the Swiss mountains, right after his pursuit of Moriarty into Reichenbach Falls.  Holmes wakes to find himself battered and bruised, not saved from the brink of death, and rather restored from it.  His savior is Frankenstein’s monster, who isn’t a creature cobbled of dead parts, but an intelligent and sensitive man, one who happens to be over eight feet tall.  Holmes learns that Moriarty, too, has been restored.  Holmes is given a chance to solve a new puzzle, and to see justice done.

This is another good story, one of the better ones in the collection.

Holmes is dead in “A Country Death” by Simon Kurt Unsworth.  He’s been killed by one of his own experiments in beekeeping.  It falls to his successor to dig through Holmes’s records and notes, to learn the truth.

Unsworth works to keep his reader in the dark.  It’s a clumsy device for building tension in a story that has very little plot.  Not only is the outcome obvious far too soon, it doesn’t ring true.  This tale usurps Holmes as a character, but does no justice to him.

“Sherlock Holmes and the Great Game” by Kevin Cockle, places Holmes in the high Arctic, called in by the Northwest Mounted Police to track down a serial killer, one preying on the native population.  A native woman has been captured and carried away.  Using a magical Zulu knife as his guide, Holmes tracks her attackers to an outdated galleon that conceals an ancient secret.

This tale contains a unique mash of ideas.  Unfortunately, it piles unlikely means onto foggy motive with improbable opportunity.  Even the most eager suspender of disbelief will be scratching his head.

In “Sherlock Holmes and the Diving Bell” by Simon Clark, Holmes has been called to investigate a pair of mysterious deaths.  A diving bell accident, some five years previous, cost a man his life.  It was in the retrieving of the bell that two other men died, not due to misadventure, but apparently frightened to death.  It leads to speculation that the man below had somehow survived, becoming a fearsome creature.  Holmes and Watson enter another bell, and head down to investigate.  There, they’re attacked by the same mysterious force that felled their predecessors.

This was a decent tale, although I found Holmes’s easy acceptance of the supernatural, on very little evidence, to be questionable.

Holmes is asked to investigate a crime that already seems solved in “The Greatest Mystery” by Paul Kane.  Simon was found, holding a poker, over the bloodied corpse of his fiancée.  Despite the evidence, his cousin is convinced he didn’t do it.  Simon claims no memory of the event.  On their way back from visiting him, Holmes and Watson encounter a similar crime in progress, and learn about many more.  In most cases, the perpetrator commits suicide.  After considerable time and reflection, Holmes believes he knows who is behind the heinous series of murders.  There is only one way to stop him.  Holmes asks Watson to kill him.

This is one of the more gripping stories in the book.

In “The House of Blood” by Tony Richards, Holmes not only survived Reichenbach Falls, he’s become immortal, persisting to the present day.  Holmes is visiting Las Vegas, where he is working a case.  There have been several murders, all involving someone who has won big.  Each victim has been drained of his blood.  Holmes quickly learns that an oriental woman is involved.  A lucky break leads him to the old part of town, and an encounter with a malevolent spirit.  He points his gun at the woman, but must confront his own moral dilemma, as well as supernatural forces.

I enjoyed this one right up to the point where it became clear that Holmes’s revulsion for shooting a woman is based, not on Victorian morals, or on her conduct, but on whether or not she is attractive.  It’s ironic, after his indictment of Vegas, that Richards’s version of Holmes is just as shallow.

“The Adventure of the Six Maledictions” by Kim Newman reprises Sebastian Moran, partner and confederate of the infamous Moriarty.  Mad Carew, a pal from Moran’s army days, shows up with a cursed emerald.  Carew knows there are religious zealots on his tail, and he wants to survive his theft.  Moriarty accepts the case, and immediately drags Moran into the curse.  Moriarty’s strategy is to obtain several other valuable, cursed items.  Moran is able to make an exchange at Scotland Yard for one, but finds himself forced to outfox the Italian mafia, for another.  He trundles through streets stuffed with hidden assassins to obtain his last prize.  He’s almost mummified for his trouble.  Amazingly, within forty-eight hours, they have an impressive assortment of items assembled, ready for Moriarty’s coup-de-grâce.

This delicious, tongue-in-cheek adventure is the best in the book.  Though it’s the longest, it felt the shortest.  I couldn’t put it down.

Over all, this is a strong collection, well worth the price.