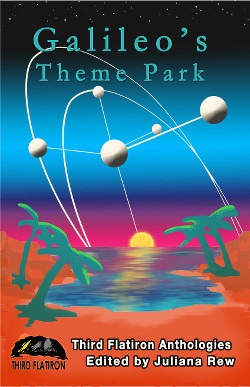 “And Yet They Move” by Alex Zalben
“For the Love of Money” by Ginger Strivelli
“The Kromlau Gambit” by Steve Toase
“Vincenzo, the Starry Messenger” by Dr. Jackie Ferris
“A Hard-Fought Episode at the TON-1 Black Hole” by Eric J. Guignard
“Titan Is All the Rage” by Jemima Pett
“Signals” by Erica Ruppert
“Night on the High Desert” by Connie Vigil Platt
“Dispatches from the Eye of the Clown” by Justin Short
“The Beast and the Orb of Earth Deux” by Wendy Nikel
“Growing Smaller” by Jimmy Huff
“Titanrise” by Adrik Kemp
“New Heaven, New Earth” by Neil James Hudson
“First, They Came As Gods” by G. D. Watry
“And the Universe Waited” by Jo Miles
“The Bright and Hollow Sky” by Martin M. Clark
“Devouring the Classics: Ten Recipes” by Rachel Rodman
“No Encore” by Ville Nummenpää
“Just Right Guy” by Art Lasky
“Advice for the 2060s Birder” by Lisa Timpf

This anthology offers new stories inspired by the astronomical discoveries of Galileo Galilei. Some tales involve the great scientist’s work directly, while others take place in the deeps of space, as revealed by his telescope.

The setting for “And Yet They Move” by Alex Zalben is a distant solar system that defies the laws of physics. All bodies within it orbit one of its planets, rather than its star. A suicidal woman, sent to investigate the mystery alone, arrives on the shore of the central planet’s ocean. She makes a surprising discovery. This is a well-crafted character study. The use of a twentieth century pop song as a major plot element seems out of place.

In “For the Love of Money” by Ginger Strivelli, a quartet of greedy billionaires travels to a planet inhabited by aliens who base their economy on love. Inevitably, misunderstanding results. This is a simple moral fable, weakened by the story’s amateurish style.

“The Kromlau Gambit” by Steve Toase takes place during the early days of the Soviet space program. A sorcerer uses black magic to allow a cosmonaut to pass beyond a supernatural barrier that blocks travel beyond the atmosphere. The magician expects to exact a terrible price, but meets an unexpected fate. This is a moderately effective horror story.

A servant of Galileo is the title character of “Vincenzo, the Starry Messenger” by Dr. Jackie Ferris. While gazing through his master’s telescope he has a strange encounter with a mysterious entity. The mystical philosophy of this story is difficult to understand.

“A Hard-Fought Episode at the TON-1 Black Hole” by Eric J. Guignard features an interstellar trucker and an artificial intelligence in the form of a country singer. Together they must battle a space-going motorcycle gang, while protecting precious cargo and avoiding a black hole. This space opera provides plenty of action, if not much plausibility.

Wealthy tourists travel the solar system in search of thrills in “Titan Is All the Rage” by Jemima Pett. A crisis occurs during an excursion on Titan. Unfortunately for the reader, it is solved without much suspense.

A woman hears unexplained sounds in “Signals” by Erica Ruppert. They transform the ordinary noises of everyday life into unearthly music. Although the idea is intriguing, the story does not reach a satisfying conclusion.

“Night on the High Desert” by Connie Vigil Platt is set in the Old West. A cowboy detects signs of strange intruders while riding through the Badlands. Although the reader already knows these are aliens, the cowboy never encounters them directly. Because of this, the story is anticlimactic.

“Dispatches from the Eye of the Clown” by Justin Short is a bizarre tale of a married couple on a planet where rain takes the form of disembodied clown heads. Things get even weirder when the woman becomes pregnant. This story is certainly unique, but there is little to it beyond its eccentric theme.

A pair of space explorers discovers a mysterious object on an Earth-like planet in “The Beast and the Orb of Earth Deux” by Wendy Nikel. What they find out about it reveals something about the agency that controls space travel. This tale of a government conspiracy is not very compelling.

“Growing Smaller” by Jimmy Huff takes place in the near future, when a recently discovered, supermassive black hole threatens the Earth. Despite this cosmic background, the story deals with a man and his young son wandering around a carnival. The plot is episodic, with events ranging from ordinary to futuristic to surreal. The ending is likely to leave the reader confused.

A spaceship hauls a moon of the outer solar system into Earth orbit in “Titanrise” by Adrik Kemp. The author provides many exotic details about the inhabitants of the ship. Their extraordinary mission occurs without problems, so the story creates little tension.

As in the first story in this anthology, “New Heaven, New Earth” by Neil James Hudson involves a region of space with a geocentric system rather than a heliocentric one. Here, however, the phenomenon is growing, threatening to reach our own solar system. A team of space travelers investigates the region. Many believe it to be the work of an unknown god, and attempt to contact the deity. Sacrifice, tragedy, and a trace of hope result. This is an intriguing combination of science fiction and theology, with fully developed characters.

“First, They Came as Gods” by G. D. Watry also involves religion. A scientist and a priest who has lost his faith discuss the discovery of intelligent life on Io. Their conversation leads to an unexpected encounter. This is an interesting story, which raises philosophical questions about faith, truth, and reality.

In “And the Universe Waited” by Jo Miles, humanity has been searching for intelligent extraterrestrial life for an immense length of time. A human spaceship orbits an alien world, waiting for its inhabitants to make their first venture into space. This story is enjoyable, but the characters seem too contemporary for a tale set in the extreme far future.

A single human warship battles a gigantic alien fleet in “The Bright and Hollow Sky” by Martin M. Clark. Victory requires the use of a dangerous, experimental weapon of incredible power. Despite a clever twist ending, the setting and characters of this story will seem familiar to anyone who has ever seen Star Trek.

The anthology ends with “Grins and Gurgles,” a collection of four very short, humorous stories not related to its theme.

“Devouring the Classics: Ten Recipes” by Rachel Rodman, as the title implies, consists of a list of recipes based on mythology.

In “No Encore” by Ville Nummenpää, a harpsichordist’s body falls apart during a concert.

“Advice for the 2060s Birder” by Lisa Timpf offers tips for birdwatchers in a post-apocalyptic world.

All four stories provide mild amusement, and serve as a light dessert after a full meal of Galilean tales.