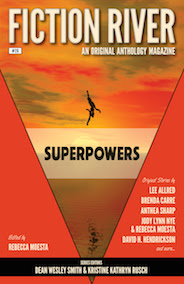 This anthology is dedicated to teenage superheroes, much like the ones that have captured the popular imagination. While written for a YA audience, the tales in this collection can reach all ages. Who hasn’t imagined what having powers would be like? Would it be a gift or a nuisance?

Or perhaps you think the subject of superheroes is overdone, and you figure that this is just more of the same. The box office is full of guys and gals in capes, super attractive and intelligent people who discover that they have even more incredibly amazing abilities! What’s so relatable about that, you say? Well, this anthology will be right up your alley. The kids are the heroes in these pages. Their powers just expose who they are. The stories in this anthology are reflections on the inner conflicts of the human heart. Superhero stories should be human stories after all, and that is always worth your time.

“Villainous Aspirations” by Stefon Mears is a heartwarming tale about the teenage son of superhero parents. Told from the son’s point of view, we learn that he wishes to be a supervillain! When he gets superpowers like his parents, he decides to hide it from them. The story is charming and amusing and delivers a satisfying ending.

“A Kiss Too Sweet” by Eric Kent Edstrom is positively charming and laugh-out-loud funny. A sixteen year old girl with diabetes develops a superpower: her kisses are magic, making the recipients of them amenable to her wishes. At first she’s eager to use this new power, until everyone loves her so much that they start fighting one another. She does the right thing in the end, even if it stings.

“The Clunkety” by Brenda Carre is set in the same world as the Truth-Seer, Carre’s epic fantasy novel. The protagonist, Gret, is a Roonish witch with an early talent for magic. For readers unfamiliar with Carre’s universe, there’s lots of exposition at the beginning to get them up to speed. That’s a bit cumbersome at first, but once the setting is established the stakes are raised as Gret fights to save her love.

“Power Trip” by Lee Allred is about teenagers who get superpowers while others remain powerless; an allegory for puberty that Allred manages to make fresh and interesting as literal power dynamics change in a high school setting. As things take a deadly turn, the protagonist begins to realize that heroic work is about doing things you don’t want to, but ought to. The story resonates and has a good twist at the end.

“Pocket Full of Ashes” by Anthea Sharp is set in Victorian England and follows Kit, a woman who can shoot flames from her hands. Since Kit is a pickpocket, she accidentally sets people’s coats on fire and has to retreat. She joins a troupe eventually to make money in a more honest way. The story is enjoyable and interesting as the characterization is expert and the setting fresh.

“The Ordinary” by Valerie Brook is short and about love, taking place in a monastery in a mountain. Tomas must pass a terrible test or his parents will be put to death. The internal battle Tomas wages during his meditations is intense, making for an ending that packs a serious punch.

“Dawn” by Jody Lynn Nye & Rebecca Moesta is about the adolescent goddess Aurora. Typical teenager, she sleeps in and delays the daybreak! All she wants to do is inspire a poet. The responsibility of transitioning between darkness and light isn’t glamorous to her, but she finds out how important it is when she deviates from her tasks. The story is charming even if the concept is a well-trod one.

“Fatty Boombalatty” by Kerrie L. Hughes follows Matilda Bloom, labeled “Fatty Boombalatty” by the mean kids at camp. Matilda’s had it, as one might understand, and gets in trouble for retaliating against the girls calling her names. Instead of being punished, she’s handed a magic bracelet that allows her to read people’s thoughts. Matilda finds out that people are mean because they don’t want to deal with pain, a poignant lesson.

“Passion for the Game” by Brigid Collins is a sports story, and starts with Jimmy’s declaration: he’s not playing baseball anymore. It shocks his family, as baseball is his talent and it brings hope to the town. It turns into a dialogue about hero-worship and whether it’s healthy. Fans of sports stories will like this one, but for those who couldn’t care less, there are great family themes that ring true and carry the story forward.

“Just Stop It!” by David H. Hendrickson starts with a tense dinner scene: a teenage girl is watching her parents bicker. She discovers that she has an ability that most kids probably desire. When she tells them to stop, it’s like a spell has been cast, and suddenly…her parents reconcile! She decides to use her powers to break up fights at school. It’s very cathartic experiencing the diffusing of a toxic fight through the eyes of this unlikely and relatable hero.

“Normal Boy” by Rebecca M. Senese shows us what would happen if everyone got superpowers but one normal kid. Of course, rivalries generate, and a normal boy finds that he has a super-powered bully problem. Using his wits, the protagonist comes up with a clever way to handle the problem, delivering a great twist at the end. This one is an enjoyable read about a charming underdog.

“Sophie Rosenblatt, Hero at Large” by Annie Reed is about a girl who is special, but it’s not clear why. The story opens with her sick in bed, sharing her woes with her cat as she wallows. There is nothing exceptional about this, until she has an epiphany. This one has heart, and is an intriguing story about an unlikely hero just trying to keep out of sight.

“Flowers in Winter” by Kelly Washington is about supernatural powers, but the stakes aren’t high. The protagonist, Mattie Hotchkiss, describes herself as a “Systematizer,” which is the ability to move things according to an organizing principle. Mattie likes the library, where her talents are appreciated. It’s a nice comfort read, focusing more on the day-to-day worries of powerful people instead of the eyeball-punching fights normally expected of such a subject.

“Hidden Talents” by Dayle A. Dermatis is a story set in the past, about a young schoolgirl named Tilly who is despondent that she does not have a Talent like the rest of her peers. To her chagrin, her teachers inform her that she does have a Talent, and that it’s clumsiness! Mortified, Tilly must learn how useful her gift really is, especially to other people. This one is an original concept delivered in a reflective and enjoyable way.

“A Ballad of Osmosis McGuire” by Travis Heermann is full of delightful Shakespearian insults. Oswald, or “Oz” is being beat up by a bully, so he responds by quoting Henry V. Oz starts to develop a tolerance to the beatings, and gains the confidence to defend himself against his assailant. But he has a suspicion: the people who touch him appear to transfer their strengths to him. When someone he loves starts to falter, while he gains her talents, he has to figure out how to stop it. This is the most original story in the anthology and gets at the heart of what it means to be a hero: the death of self.