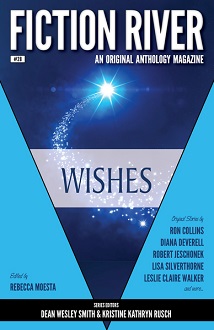 “The Rock of Kansas” by Eric Kent Edstrom
“Movie Boy and Music Girl” by Ron Collins
“Upon_a_Starship.pgm” by Brigid Collins
“Ellen Double Prime” by Alexandra Brandt
“Twin Wishes” by Jamie Ferguson
“Granted” by Robert Jeschonek
“If Wishes Were Kisses” by Lesley L. Smith
“A Winged Heart” by T. Thorn Coyle
“What Alanna Wished, How, and Why” by Dave Raines
“Blame It on the Ghosts” by Annie Reed
“Family, Fair and True” by Dayle A. Dermatis
“True” by Leslie Claire Walker
“How I Became a Fairy Godmother” by Bonnie Elizabeth
“Starfish at Ebbtide” by Lisa Silverthorne
“Turquoise Trail” by Diana Deverell
“As Fast as Wishes Travel” by Dale Hartley Emery

Fiction River: Wishes is a themed anthology with YA stories. It’s always a risk writing stories for such a well-worn trope, but there is still room for new variations and the book manages to find more than just a few.

It starts out with a bang with “The Rock of Kansas” by Eric Kent Edstrom. Romeo Marcus is a homeless boy living in a refrigerator box, who is taken by government agents to be taken to an alien object that crashed to Earth. Every couple of years, the Rock gives out a name to come to it to make a request, and it’s Romeo’s turn. The Rock makes every request turn into a disaster and it’s up to Romeo to make one that isn’t. Strong characters and a difficult problem make this a great story, and the ending really nails it. Excellent in all respects.

Ron Collins’s “Movie Boy and Music Girl” has Brock Davis looking for help with his infatuation with a girl in his school. Kelli Izdani is beautiful, a talented musician who pays him no attention. He goes to a woman reputed to be a witch, who gives him three wishes. The clichéd setup is given new life as we see just how the wishes affect both Brock and Kelli. I liked that the story was filled with enough surprise to make it fresh and touching.

“Upon_a_Starship.pgm” fits a wish story into a science fictional context. Shanti has grown up on the spaceship Karma Dancer, where her mother was the pilot, and wants to follow in her footsteps. But mom refuses to let her try, so she uses her computer skills to create the program that gives the story its title. But the program starts to go wrong. Brigid Collins has an appealing character, but I think the general thrust of the story is a little too routine for the story to stand out.

“Ellen Double Prime” by Alexandra Brandt shows the title character working in a diner, pregnant and hating the job. Thing is, this is all a surprise to her: Ellen was a rich girl in prep school, and certainly not pregnant. She discovers that she’s in an alternate life, one where her father lost all his money and things spiraled down from there. But as she finds out more about her new past, she begins to question her own beliefs and assumptions. A strong and powerful story.

In Jamie Ferguson’s “Twin Wishes,” Ileana has a crush on John Taylor, who is oblivious. And Ileana has a secret: she’s a mermaid and knows the truth would freak him out. But when she gets a chance to be with him, she may be forced to tell the truth. The story was a tad predictable for my tastes; I saw how the ending would play out. Otherwise, though, the characters draw you into it.

“Granted” by Robert Jeschonek is set in a world where wishes do come true. The problem is that sometimes the wishes bring a new person into existence. Nil is one of these wishies: looking 17, but really only in existence for a year and a half. Angry at her plight, she goes to the Wisherman to find out who wished for her. She is given three leads. But as she meets with the three possibilities, she discovers that maybe the reasons for the wish aren’t as capricious as she thought. Another good, solid story.

Lesley L. Smith also uses the wishing trope in a science fictional context with “If Wishes Were Kisses.” Emma’s dad is working on FTL travel and Emma has a crush on Noah, his lab assistant. They go to test a ship based on their discoveries, and it seems to work—only it doesn’t come back. It’s a short tale where the idea of a wish is linked to quantum theory. Interesting, but slight.

“A Winged Heart” by T. Thorn Coyle is about Solana, a troubled teen who has been taken away from her family after being mistreated. But she still misses her family, and when given the opportunity to make a wish, goes for one that she hopes will fix her life. The story wasn’t bad, but I found little happening other than the wish.

“What Alanna Wished, How, and Why” by Dave Raines is a clever piece of worldbuilding, setting up a situation where granting wishes are commonplace. But it’s not easy: the bigger the wish, the harder it is to achieve. Alanna is learning the talent when she discovers her father is dying and has spent some of his last money on giving her an opportunity to make a Class B wish—a big one, but not the biggest. So Allana is faced with a dilemma: use the wish on herself, or to help her father. It’s a strong story about making choices and their results.

Annie Reed’s “Blame It on the Ghosts” features Perriwinkle Winterhaven, who sees ghosts—and their pets. It starts out as a project for the Young Entrepreneurs Club, which she joins to be with a boy she has a crush on, and where she makes up a fictional pet sitting business. But somehow ghosts of dead celebrities hear about it, and ask her to watch their ghostly pets, which she agrees to. But when Howie Love, a deceased child star, asks her to watch his cat, trouble ensues. It’s an entertaining little romp. Perriwinkle is a great character and the cat is just as troublesome as a live one.

“Family, Fair and True” by Dayle A. Dermatis features a changeling child, one who has grown up with her human parents and who now wants to see her real, faery parents. It takes a wish to bring her there, but things don’t go the way she hoped. It works as both a “Be careful what your wish for” story, and a metaphor for any adopted child looking for their birth mother. A little bit predictable, but an entertaining journey.

Leslie Claire Walker contributes “True.” Steve has a serious heart condition, and one day his best friend Elisa guides him into a local bayou. Elisa has a secret, one that can help Steve, but at a serious cost. Good characters, but I’d prefer something more complex.

“How I Became a Fairy Godmother” by Bonnie Elizabeth shows Willow, who meets a scruffy-looking stranger who offers her a wish. Willow’s wish is simple: to make people happy. And she finds she is now part of the local Fairy Godmother’s Club, where a group of others who made unselfish wishes gather as something of a support group. Willow discovers she has to grant wishes whenever someone asks for one. I loved the setup, but I feel there was far more to explore in the concept.

“Starfish at Ebbtide” is firmly based on the concept that every wish has a price. Lisa Silverthorne’s story follows Emma, who goes to a tide pool hoping that her grandmother’s talk of the Cannon Beach Sentinel—a being that has the ability to grant wishes, but not without cost, can help. Emma’s father has been in a car crash, and is dying and she is willing to risk everything to save him. But the price involves losing the boy she’s in love with. I really liked Emma’s dilemma and this is a well-constructed story that manages to make the happiness of the ending work.

“Turquoise Trail” by Diana Deverell paints a portrait of Shane Harrison, a boy living in New Mexico, ashamed of his excess body hair, which leads him to be teased constantly at school. A bigger problem is his father, who has serious alcoholism issues. He’s been sober for several years but slips back, is sent to the hospital, and is unable to afford rehab. Shane is offered a wish from a stranger. The story rests on the character of Shane, which is wonderfully drawn. Like many of the stories here, this is based on the question of “What wish will he make?” and I don’t think there’s much suspense about what his choice will be.

The final story, “As Fast as Wishes Travel,” is about Grace, a teen who is bored out of her mind in Geometry class. Miss Fisher is deadly dull and Grace has a mini-crush on her substitute, Ross Alexander. Tired of the class, she wishes that Miss Fisher would get a kidney stone so Mr. Alexander can sub the rest of the year. When the wish appears to come true, Grace is faced with a dilemma. Dale Hartley Emery writes a lively story with a little bit of suspense in the end.

The problem with this sort of theme is that the stories tend to follow similar patterns and the authors have to strive to make them fresh. Overall, they have done a fine job of that. There really isn’t a bad story here, and the book makes great reading.