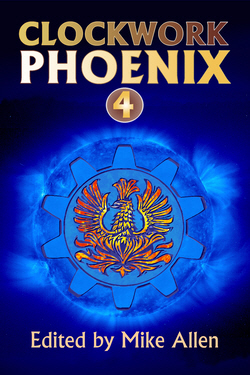 “Our Lady of the Thylacines” by Yves Meynard
“The Canal Barge Magician’s Number Nine Daughter” by Ian McHugh
“On the Leitmotif of the Trickster Constellation in Northern Hemisphere Star Charts, Post-Apocalypse” by Nicole Kornher-Stace
“Beach Bum and the Drowned Girl” by Richard Parks
“Trap-Weed” by Gemma Files
“Icicle” by Yukimi Ogawa
“Lesser Creek: A Love Story, a Ghost Story” by A.C. Wise
“What Still Abides” by Marie Brennan
“The Wanderer King” by Alisa Alering
“A little of the Night” by Tanith Lee
“I Come from the Dark Universe” by Cat Rambo
“Happy Hour at the Tooth and Claw” by Shira Lipkin
“Lilo Is” by Corinne Duyvis
“Selected Program Notes from the Retrospective Exhibition of Theresa Rosenberg Latimer” by Kenneth Schneyer
“Three Times” by Camille Alexa
“The Bees Her Heart, The Hive Her Belly” by Benjamin Sriduangkaew
“The Old Woman with no Teeth” by Patricia Russo
“The History of Soul 2065” by Barbara Krasnoff

This 4th volume of Clockwork Phoenix contains an excellent diversity of speculative fiction ranging from cold and hopeless to harsh but victorious and warm and fulfilling. It was a pleasure to read.

Yves Meynard’s “Our Lady of the Thylacines” starts tranquil—a girl, living in The Garden, raised and taught by the goddess-like Lady. The Lady has numerous animal friends, some of which are the girl’s favorites. But the animals keep disappearing with the “stripeys” (Thylacines), the latest to vanish. Garden of Eden this garden is not, being more a mixture of refuge and auction block, and the Lady is not a caretaker but a slave. Then tranquil becomes cruel and dark for the girl has a purpose that she could never have imagined. A deliciously elusive plot and a Lady I would never want to meet in a dark alley. Highly recommended.

In “The Canal Barge Magician’s Number Nine Daughter,” by Ian McHugh, the pursuit of power can be a brutal and dehumanizing thing, but faith in oneself is essential to overcoming the most horrific of situations. Behra is the ninth daughter of the bargeman Aghor, a black arts magician who wears her sisters’ dried, aborted fetuses from his belt. Into the horror of Behra’s enslavement to her father comes a doll-sized golem on a mission to prevent civil war. Aghor sees the opportunity for power in agreeing to help the golem while Behra the opportunity for freedom. But freedom comes at a cost, for Behra must first learn to mirror her father’s awful powers without becoming corrupted by them. A dark sword & sorcery tale with an unexpected ending. Definitely recommended.

Nicole Kornher-Stace’s “On the Leitmotif of the Trickster Constellation in Northern Hemisphere Star Charts, Post-Apocalypse” is a complex, post-apocalyptic story told from two points of view. First is Wasp, the young woman Archivist, born and trained to brutal single combat on the edges of the radiation–tainted Wastelands, whose only purpose is to capture ghosts and wring them dry of useful information. Second is a scholar who studies the star charts and constellations of various Wastelands cultures in order to better understand their mythologies. The least of these star charts is the one about the Archivist, Wasp, who seems to have played culture-hero to the very spirits of the deceased she once enslaved. An intriguing story but difficult to follow. I would have liked to see much more of Wasp’s story from her point of view.

“Beach Bum and the Drowned Girl,” by Richard Parks, asks a simple yet profound question: Are we real if no one has need of us? The Beach Bum and the Drowned Girl exist solely because people have need of them, until they meet each other and learn that perhaps there may be more purpose in their existence than they realized. A thought-provoking story.

Gemma Files’ “Trap-Weed” tells of a selkie caught by a magic-wielding pirate captain, himself cursed to never set foot on land. Yet a selkie is treacherous, changeable like Mother sea, and will take alliance even with a shark-were to gain his freedom and leave behind all he came to love in the human world, all to get back his true form. A harsh lesson about the true nature of things. This story is a part of the author’s Hammer Pirates trilogy. I could see the allure of some of these characters, especially the selkie and the pirate captain.

“Icicle,” by Yukimi Ogawa, is the tale of a young half-human, half snow-woman girl who leaves her mountain home to find the ocean but, once there, discovers love and the joyful reasons why her father had left her so long ago. Simple but profound.

In A.C. Wise’s “Lesser Creek: A Love Story, a Ghost Story,” unrequited love in combination with suicide can create a ghost hungry for that which it couldn’t find in life. And hungry ghosts can become hungry devils, taking souls of the living in a desperate bid to somehow finally get love right. Poignant and compelling.

“What Still Abides,” by Marie Brennan, is a dark story set when the capricious Norse gods ruled and the undead lived. A dréag, an undead wight, has risen from its barrow. The clans try to put this horror back underground where it belongs, but they fail, leaving only one option for survival. Told in a bardic style, the cant of the words are Teutonic in nature: “And so has it been since that day. Never came the sun over this land after that; dwell we therefore in darkness, that men from without hold in fear.” A must read. Recommended.

Alisa Alering’s “The Wanderer King” is another post-apocalyptic story. “It is day 90 and most all are dead.” Two young women, Chool and Pansey, have survived together, avoiding the Fixers in the towns and mines and Wanderers that salvage the woods. All they want is “to find a way out of this deep dark bottom hole the world has fallen into.” Scrapping along in a dirty, death-dangerous remnant of the world that used to be, the two discover a crown, of sorts, they think may belong to the King, the one who can show them a way out. But redemption is elusive, even for those desperate for it. A gritty, hard-hitting story. Recommended.

“A Little of the Night,” by Tanith Lee, tells the story of Corlan Von Antal, still lean and hard as steel in his sixties, and the forest-deep secret people sense about him. “Ursus” some call him for his black bearskin cloak. But those military officers who know him best consider Corlan’s powerful demeanor and colossal half-wolf hound and recognize that “it took a bear to govern a wolf.”

Rumors abound how Corlan came to be. He’d slain a fellow officer, “some shameful scum the army was glad to be rid of,” and had fled into the forests. After days of near-death wanderings and starvation, Corlan had stumbled upon the ancient ruined House Veltenlak with its still resident caretakers. Their master was dead, but horror within the structure of the castle itself pulls on Corlan, striving to feed on his vitality. His fight to escape the night-dark void of this horror is akin to a journey through an underworld of near madness, a journey that leads to the discovery of the giant wolf-hound wasting away and Corlan’s realization of what he must sacrifice in order to rescue both himself and the wolf. An exceptional story, riveting in its telling. Highly recommended.

“I Come from the Dark Universe,” by Cat Rambo, is a story about love and sex between multiple alien species on Twicefar, a way point between many galaxies, and Bo, the brothel manager, who is humanoid, but not human, unable to be with anyone not of his own bird-like species, yet inexorably drawn to a woman who says she’s from another dark universe. A tantalizing tale about a woman who shouldn’t exist and Bo’s particular physical needs. But Bo can wait, as long as it takes, for the strange woman “to grow up.” The curious twist to this story’s end left me wanting more, much like I could imagine how Bo felt about this woman. Definitely recommended.

Shira Lipkin’s “Happy Hour at the Tooth and Claw” is an incredible love story about Zee, a witch who can flip through realities like reading a book, who violates the laws of physics by thinning boundaries between worlds because she’s bored, and who long ago hid her heart to avoid the pain. Cast in a poetic, screen-play type style, at places the structure of the story morphs because a character doesn’t like the way Zee first portrays them. Hiding her heart made her inviolate and immortal. But Zee is “apocalyptically bored,” and “bad things happen when beings who can smash together universes get bored.” Hesitantly, she comes to the decision that perhaps it’s time to find and reassemble the pieces of her heart, only to learn that the most crucial pieces never left her. The ending changes the story, and everyone in it, allowing me to discover a brand new tale upon rereading it. Exceptional and highly recommended.

“Lilo Is,” by Corinne Duyvis, tells of a single-mom’s sometimes tentative, sometimes desperate, sometimes joyful struggles to raise her half-human, half-spider demon daughter, to always be honest with her and to help her be true to both of her worlds. A must read for any parent, any planning-to-be parent or any never-want-to-be parent. Definitely recommended.

Kenneth Schneyer’s “Selected Program Notes from the Retrospective Exhibition of Theresa Rosenberg Latimer” is told as a critic’s review of the works and the underlying troubled life of the artist Theresa Rosenberg Latimer. The detail of each review is so rich that I felt as if I stood before each painting, pondering the artist’s life and personal struggles. This is a unique way to tell a protagonist’s story. Loved it and definitely recommended.

“Three Times,” by Camille Alexa, follows Zhee, an immortal incorporeal entity, who takes human form to relish the pure sense of alive that a human body brings to existence. And while in this form, Zhee finds Her, the one he’d sensed while still in the aether. But her brothers have other ideas, and now he must wait until that future when she can join him in spirit. A light read.

Benjamin Sriduangkaew’s “The Bees Her Heart, The Hive Her Belly” is set in a universe where everyone is a replicant and their memories are all interlinked. Sennyi is dying, her closest crèche-sibling vanished with a network update. She saves to have a heart transplant and wakes from the surgery with a hive of bees in her chest. The story is Sennyi’s journey to find meaning through this Alice-in-Wonderland type crazy world, meaning she hopes will somehow reunite her with her sister. Too abstruse and metaphysical for me.

“The Old Woman with No Teeth,” by Patricia Russo, is hilarious to read because the protagonist constantly chastises the narrator, a scribe who argues back, for writing things she believes are incorrect or irrelevant to her story. Recommended.

In Barbara Krasnoff’s “The History of Soul 2065” what if we’re part of an original soul and, by coming together, we help heal the universe? This story follows 70 years of an extended family’s annual religious holiday gatherings who (at first only humorously) called themselves Soul 2065, until they discovered that they’d become the very thing they’d named themselves to be. Warm, light yet intriguing. Recommended.