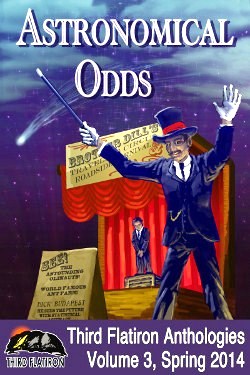 “In the Blood” by Ken Altabef
“Garden of Fog and Monsters” by Michelle Ann King
“From Here to the Northern Line” by Edoardo Albert
“Mother of All” by John A. McColley
“The Shamrock Award” by Jennifer R. Povey
“The League of Lame Superheroes” by James Aquilone
“Casualties” by Martin Clark
“Good Odds for Murder” by Iain Ishbel
“A Clone Called Slick” by Garry McNulty
“Time’s Elastic String” by Nick Slosser
“Lost in the Mail” by Benjamin T. Smith
“Birth Lottery” by Susan Nance Carhart
“The Olinauts” by Adele Gardner

This third anthology by Flatiron Press features stories about events that happen against all odds. Sometimes those odds refer to mathematical odds and sometimes they refer to the degree to which an outcome is probable. Since the latter description applies to all speculative fiction, this seems like groping for a theme, but that shouldn’t keep readers away. This is a readable and enjoyable collection with at least two stories that will stick with you, though which two those are depends on the reader.

“In the Blood” by Ken Altabef is one of two stories that feature savants. Here, a young boy named Matthew is a circus performer in the late 19th century. The boy can multiply any two numbers an audience member gives him and after viewing one of these performances, a wealthy man invites the boy and his huckster father to dinner. The wealthy man shares the boy’s talent, the source of which, as it turns out, is the ability to remember events since the dawn of time. This very intriguing twist is not developed, but rather is presented to the reader. The result is the beginning of a good story, not a unified tale.

In “Garden of Fog and Monsters” by Michelle Ann King, Irene sacrifices herself so that her sister and her sister’s children can move to a perfect planet where everyone can have whatever they want. Most importantly, the children will have some space since Earth is overcrowded. The price Irene pays for Eden isn’t death, but that Irene becomes a part of the planet’s serene collective consciousness. The reader expects Irene to accept her fate and for her to meditate on its comparative beauty, which she does. Irene concludes that this is a good planet for a newborn. The point, however, is confusing since the families who get to live on the Edenic planet live traditional lives as individuals. Is Irene’s epiphany that hell isn’t always other people? It’s hard to say.

“From Here to the Northern Line” by Edoardo Albert is the second story to feature a savant. In this story, autistic teenager Graeme is wanted for questioning by a pair of bumbling policemen. The crime is copyright infringement. The boy loves trains, knows all of the routes, and revels in reproducing maps of the London Underground, a.k.a, the tube. Some of the stops on Graeme’s maps, however, are not on the originals and that is because his maps include the stops aliens use when they visit. The boy’s father uses this information to make a great deal of money, Graeme becomes famous, and all is well. Told with humor, this fun story gives new meaning to “mind the gap.” Now if only the contemporary fascination with autism as the disorder of the moment were less probable.

“Mother of All” by John A. McColley recounts the thought process of a queen bee as her colony, together with the rest of the planet, experiences an environmental disaster. Bees do, however, survive and go on to venerate this long-lost mother as a goddess. The interior monologue makes good use of bee facts and the suggestion that disaster may play a role in our belief in deities is intriguing; unexpected, but also unexplored.

“The Shamrock Award” by Jennifer R. Povey concerns a spaceship that is forced to crash land on a conveniently habitable planet. The two-person crew reflect that they are sure to win this year’s shamrock award for the luckiest escape. Yet there are no sounds in the night on this lovely planet. What is happening? The suspense builds nicely, yet when we find out the couple have to leave because a monster is creeping around in the dark with a gun, we are left wondering about the point of it all. The story is a few beats shy of satisfying.

“The League of Lame Superheroes” by James Aquilone is arguably the best of the lot. Harold is the leader of the League of Superheroes, a group so lame that one of the members tells everyone he is a telemarketer rather than reveal his affiliation. But Harold has a plan. The League will use its somewhat questionable superpowers (noticing, being likable, being most likely to be put in charge) to defeat a villain who has killed a much more successful group of superheroes, the All-Stars. The League does succeed, but that’s in part because the villain is somewhat lame, which makes sense as he is a former member of the League. Fast paced, funny, and inventive, this story will also make you a hit at parties when you retell it.

“Casualties” by Martin Clark is a throwback to both the commendable and the regrettable elements of golden age science fiction. As a man’s spaceship is destroyed, he transports his consciousness into a drone ship. He will have three hours and forty-five minutes to experience his last minutes. The drone lands on a planet, a woman approaches, and the man’s consciousness runs out of time. Until, that is, he wakes up and discovers he’s in the body of a clone of a sadistic billionaire and the woman is a cyborg sex slave. This is not played for laughs. In its early moments, the story reminded me of the well-paced, gripping stories I read as a young girl and in its latter moments, the story reminds me that in far too many of those stories the apogee of space exploration is the possibility of doing it with green chicks.

“Good Odds for Murder” by Iain Ishbel plays on the conventions of noir fiction. A dame walks into the office of Nick Budapest, Investigating Actuary with a problem. She suspects her husband is cheating. Nick investigates in his own special way, which is to ask for a series of facts about the husband (age, occupation, and so on) and do a probabilistic analysis. Nick determines the husband is highly likely to be having an affair and the wife heads out with a gun. Two things mar this promising story. First, there is the data Nick uses. Are doctors really less likely to have affairs than English professors? The desire to fact check Nick’s data broke the spell. In addition, Nick lies to the wife about the probabilities of the police guessing it’s her to make sure she does not also try and shoot the woman with whom the husband is likely to have the affair. That’s one too many complications in a straightforward narrative.

“A Clone Called Slick” by Garry McNulty is a winner. Elisha creates a clone of her husband to have sex with her while her husband’s at work. It isn’t cheating, she reasons, and Slick, the clone, is more alert because he isn’t working such long hours. The husband, Chester, turns to online dating. Slick has to get a job to support Elisha, so she makes another clone, Ace. Meanwhile, Chester finds a Clones-R-Us brochure in his new girlfriend’s purse. Chester says it is time to look online again. Not only is the story a hoot, it is a sly commentary on how differently men and women think about infidelity.

“Time’s Elastic String” by Nick Slosser demonstrates that things get weirder the closer you get to a black hole. A crew member on the spaceship disappears, he reappears, he ages, people on board suddenly get bizarre titles such as “Darth” and “Grand Inquisitor.” Throughout it all, Colonel Astor of The Lightship Frontier tries to keep her calm. The outlines are clear enough, but the confusion is sometimes too confusing and the references to contemporary authors such as Steinbeck and videotapes seem odd for a story set in 2062.

The post office can be maddening for anyone, even if you are a wizard. In “Lost in the Mail” by Benjamin T. Smith, the elf post mistress insists she did not lose Mr. Adelvell’s letters. It’s impossible. Mr. Adelvill sends his spectral self to recover the letter from the Machine and announces that the odds are “not so astronomical after all.” The story, in other words, calls attention to its place in the anthology, though given the light tone and inventiveness displayed, that isn’t anything to hold against it. Shaggy dog tales have their place.

“Birth Lottery” by Susan Nance Carhart is set in a future society in which parents can, for a price, alter their embryo’s genes to produce taller, prettier people with improbable features such as indigo eyes. It isn’t just about beauty though. The doctor who discusses the package deals with Rob and Kerry talks in terms of probable disorders and faults and how important it is to fix them, even if they never do occur, even if the chances are slim. Astronomical? Yes, even that. In short, the story makes very clear it is hewing to the anthology’s chosen theme and we do not learn anything other than what we expect, which is that parents will pay any price for a perfect child.

“The Olinauts” by Adele Gardner asks the question, What are the chances that people will treat animals decently, even if they are sentient elephants? These sentient elephants don’t trust humans and have been blowing up spaceships, which makes them a little less kind than Dumbo and much less naive. The author intends this degree of tongue-in-cheek fun and it’s greatly appreciated. Needless to say, the humans and elephants work together for the greater good.