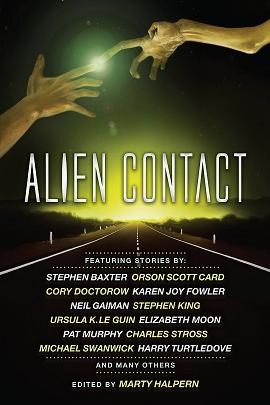 “The Thought War” by Paul McAuley
“How to Talk to Girls at Parties” by Neil Gaiman
“Face Value” by Karen Joy Fowler
“The Road Not Taken” by Harry Turtledove
“The Aliens Who Knew, I Mean, Everything” by George Alec Effinger
“I Am the Doorway” by Stephen King
“Recycling Strategies for the Inner City” by Pat Murphy
“Kin” by Bruce McAllister
“The 43 Antarean Dynasties” by Mike Resnick
“The Gold Bug” by Orson Scott Card
“Guerilla Mural of a Siren’s Song” by Ernest Hogan
“Angel” by Pat Cadigan
“The First Contact with the Gorgonids” by Ursula K. LeGuin
“Saturday Night at Minnie and Earl’s” by Adam-Troy Castro
“A Midwinter’s Tale” By Michael Swanwick
“Texture of Other Ways” by Mark W. Tiedemann
“To Go Boldly” by Cory Doctorow
“If Nudity Offends You” by Elizabeth Moon
“Laws of Survival” by Nancy Kress
“What You Are About to See” by Jake Skillingstead
“Amanda and the Alien” by Robert Silverberg
“Exo-Skeleton Town” by Jeffrey Ford
“Lambing Season” by Molly Gloss
“Swarm” by Bruce Sterling
“MAXO Signals” by Charles Stross
“Last Contact” by Stephen Baxter

Alien Contact is an intelligently edited anthology of 26 first contact stories. And thankfully, Mr. Halpern has decided to mine the last 30 years for his selections, eschewing more well-known and oft-reprinted old favorites from earlier decades. So, this is a huge anthology favoring more contemporary SF and it acquits itself wonderfully. I do not agree with all of the editor’s choices and can think of others I would have preferred, but so many terrific stories are gathered together in one place that everyone who likes this theme or is interested in learning more about it will perhaps find some new gems. After reading SF extensively for 40 years there were still 5 stories I had never encountered before.

I won’t go over all these outstanding reprints one by one, but will single out a few of my favorites.

I show my prejudices for a certain type of drama by saying out front that I feel the best story of the batch (and one of my top SF stories of all time) is “Angel” by Pat Cadigan.

This story is not for the faint of heart. It displays one of the dregs of our society meeting an alien who has become disgusted with himself. In the course of one night we encounter horrific manipulation, pain, and true compassion while experiencing at the same time a completely unnatural act. It’s a tight-wire walk that needs to be experienced to feel the empathy Cadigan has for her outcasts.

Another fantastic story is the comic masterpiece “The Aliens Who Knew, I Mean, Everything” by George Alec Effinger. This is a story with the perfect title. Think about that title and then read this quirky and hilarious story of a truly scary alien contact.

“Swarm” by Bruce Sterling is one of the early cosmic stories in his Shaper/Mechanist Universe. This story of societal espionage with an alien entity known as the swarm, and the shaper aspect of humanity is a thrill a minute. This sort of story is what made Sterling such a hot Young Turk when it was first published in 1982.

“How to Talk to Girls at Parties” by Neal Gaiman probably needs no introduction to any SF reader. Gaiman is a beloved writer to a great many people and this serious story with the silly title is one of his best. Read it and revel.

“The 43 Antarean Dynasties” is by a much respected SF author — the indomitable Mike Resnick. I’ll admit that his writing does not always please me but this is one of his golden ones. It is an achingly realized study of a member of an alien race whose long and powerful ancestry sees him become…a tour guide. It shows the degradation apportioned to history’s “losers,” who must parade their ancient and once-proud history to a bunch of shallow human tourists. It is a sadly moving tale, albeit a joy to read.

Michael Swanwick had been writing for many years when he wrote “A Midwinter’s Tale” in 1988. This polished tale is one of his best. It concerns the human co-habitation with the sentient natives on an alien planet. A young sire of ruling humanity learns how the accord between the two species was really won. It’s also a story of remembrance and story-telling; a complex and beautiful novelette.

Another poignant, yet very restrained story is the excellent “Lambing Season” by Molly Gloss. In this intense personal story we get inside the head of a female shepherd all alone in the central plains of America. It is an odd place to meet an alien but meet one she does. It’s a superbly realized story of a common woman and how much she is like the alien she encounters. Bravura performance.

Another very funny – if more biting and satirical than the Effinger story – is Robert Silverberg’s short story “Amanda and the Alien.” This is an incisive, somewhat scary but funny look at the youth culture of today as Amanda meets an alien and decides to have a little fun with this incredibly dangerous entity from space. But, it appears the alien is not half as dangerous as a teenage girl. This is a terrific read.

A very odd meeting between alien species takes place in “Laws of Survival” by Nancy Kress, which mixes dogs with aliens, robots, and a person from a devastated Earth. This one is so odd it kept me guessing until the very end. It’s clever and a delightful entertainment.

The final story is one of the best. Written by prolific author Stephen Baxter, “Last Contact” is an elegiac story about just that – first and last alien contact. Read it and feel the sorrow of a normal family in the last days of the human race. Long time readers will note that it pays homage to one of Arthur C. Clarke’s most famous stories as well.

These are but a double handful of my favorites; others by Paul McAuley, Bruce McAllister, Jeffrey Ford and a number of others serve this anthology well. If you are new to most of these stories or want to reacquaint yourself with some favorites – get this book. I thank Mr. Halpern for his knowledgeable selections. Alien Contact was a kick to read.