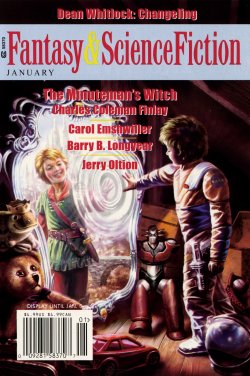 “The Minutemen’s Witch” by Charles Coleman Finlay
“Seafarer’s Blood” by Albert E. Cowdrey
“Changeling” by Dean Whitlock
“The Perfect Infestation” by Carol Emshwiller
“All in Fun” by Jerry Oltion
“The Monopoly Man” by Barry B. Longyear
“The Boy Who Sang for Others” by Michael Meddor
“An Elvish Sword of Great Antiquity” by Jim Aikin

“The Minuteman’s Witch” is an excerpt from Charles Coleman Finlay’s “Traitor to the Crown” series and tells the story of the battle of Lexington and Concord in his world in which witchcraft works. Not wanting to fight other Englishman, Proctor Brown nevertheless finds himself on Lexington Green when the redcoats march through. Not only does he witness the events there and, later at Concord, but against his own desires he plays an active role in the proceedings. Although the story is part of a larger work, the excerpt printed in this issue is self-contained, creating an interesting character in a world only slightly different from our own, who finds himself caught up in events which he opposes, but at the same time takes as his own. Finlay’s use of magic is downplayed, only indirectly affecting the outcome of the initial meeting between the English regulars and the colonial militia, allowing the author to focus on Proctor’s personal reactions to the events and his fears for the future and the present

Carol Emshwiller tells the story of a secret invasion of the planet Earth in “The Perfect Infestation.” Aliens who have the appearance of dandelion seeds inhabit hosts on Earth, notably dogs, in anticipation of the eventual signal to rise up against the thumbed ones. As they wait, they receive reminders of their ultimate mission, however, they also find themselves forming a symbiotic relationship, not just with their canine hosts, but also with the thumbed ones who help provide for their hosts. When the summons comes, the aliens must decide between their loyalty to their race or their new found loyalty to their new world.

Tom Smith has written a song called “Rich Fantasy Lives,” comparing the apparently mundane lives of people whose imagination soars while they go about their day to day existence. Albert E. Cowdrey develops the same concept in “Seafarer’s Blood,” about Eric Mumford, whose life seems to have fallen apart around him, but who escapes in his dreams to other times and places. When his imaginative journeys begin to be noticed by his estranged wife, however, Mumford begins to wonder where they are really coming from and how real they might be. In some ways, Mumford’s exploration of what is happening to him seems to happen a little too neatly, although Cowdrey does provide a slightly ambiguous ending.

Jerry Oltion provides a little story about Toby, who has discovered the ability to make one wish each year, on Christmas, that will come true. In “All in Fun,” he simply wishes for more fun in his life. Oltion doesn’t examine the mechanism behind Toby’s ability to wish or show any of the consequences. The result is a story which is light-hearted and fun to read, but which is devoid of any sort of mental calories.

Barry B. Longyear offers up an urban ghost story with “The Monopoly Man,” looking at the life of Cheri Trace, a young girl living a life of drugs and prostitution on the streets of New York. Longyear portrays Trace in a sympathetic light as she reaches rock bottom on the streets of New York, contemplating suicide, until a chance encounter with an old man who reminds her of Uncle Moneybags from Monopoly gives her the chance to turn her life around. Although Longyear’s story shares some of the wish fulfillment that makes up Oltion’s tale, Longyear also looks at the concept of paying forward and reciprocating, as well as the importance of having some sort of life’s work to keep one going.

“The Boy Who Sang for Others” is the story of a young boy who, after being kicked in the head by a horse appears to be possessed, singing in the voices of those who have already died. Michael Meddor creates an interesting small town through the use of a strong, if uneducated, young girl as his narrator. Meddor presents an interesting juxtaposition of the girl’s strong belief in Christianity and her grandmother’s possible knowledge of witchcraft in such a way that both seem to exist co-equal with each other, without the need for the author to tear one belief system down at the expense of the other.

“An Elvish Sword of Great Antiquity” is the artifact that Jim Aikin hangs his story on. Set at a country estate dinner party, the sword in question is taken from the wall and passed around the table, eliciting a variety of comments about the sword and the elves who are treated as second class citizens. Aikin creates an obvious, but very workable, parallel to the treatment of various minorities in a variety of societies. Although little more than a vignette, “An Elvish Sword of Great Antiquity” hints at a much more complex world. With luck, Aikin will find the time and desire to flesh out this world at greater length.

Dean Whitlock’s “Changeling” looks at Gavin Knight, a lonely graduate student who has moved to a new town, where he quickly makes the acquaintance, and perhaps friendship, with the odd and ugly Amanita. Amanita explains that she was an orphan, and, she suggests, possibly a changling who hears the call of her own people on an island barely visible from the coast. Although Amanita’s oddity and possible parentage run throughout the story, which has little fantastic element to it, the main focus of “Changeling” is the growing relationship between Gavin, Amanita, and Sancho, the stray parrot Gavin adopted. The story works well as an examination of two people who don’t have much in their lives as they form a friendship based on their needs and ability to help each other.

Steven H Silver is the publisher of ISFiC Press, and the Hugo-nominated fanzine Argentus. His first short story appeared in 2008 and a second will be appearing in October 2009 in the anthology Zombie Raccoons and Killer Bunnies.