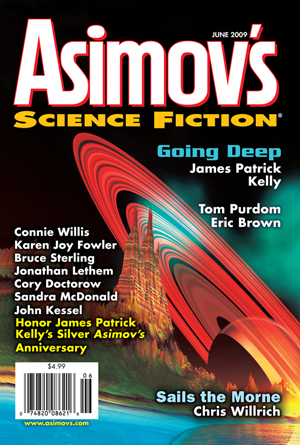 “Sails the Morne” by Chris Willrich

“The Monsters of Morgan Island” by Sandra McDonald

I can relate to what happens to the character in “Bare, Forked, Naked Animal” by John Alfred Taylor. He tells a cautionary tale of what happens when you get too complacent in your environment. In a future society where everyone has their own private virtual reality projected around them, what happens when a person is cut off from his? Jacyn Wilde is an actor returning home after a party only to find himself locked out of his apartment. As unseen as a ghost, Jacyn struggles to survive in what rapidly becomes a hostile environment.

Eric Brown’s “Cold Testing” is a tale of unrequited love. Ed is the Captain of the salvage ship A Long Way From Home, Karrie is his Engineer. Ella, the stunningly beautiful co-pilot is an AI in human form. On their way to find a century-old wrecked starship in a system inhabited by a hostile species, they stop off at the frozen planet Nova Charon; Ella wants to test her environmental limits before going after the wreck. In the ensuing story hostile aliens are the least of their issues, as love, jealousy, and broken hearts abound. It brings to mind one of my favorite stories of all time, Lester del Ray’s “Helen O’Loy”.

“The Monsters of Morgan Island” by Sandra McDonald is a dark fantasy tale of one young woman’s’ place in life. Mary Voltz always loved when the monsters were brought to Morgan Island and thrown into the pit. But one day, Mary saves a monster child from his fate and everything changes. A story with a flavor of the Holocaust mingled with Anne Frank gone wrong. McDonald crafts a gripping tale with an ending that surprised me.

In “Going Deep” by James Patrick Kelly, we experience the life of Mariska, the teenaged clone of an interstellar spacer. She lives on the Moon with her hired father Al, and her AI-controlled room. She has all the usual experiences with teenaged angst; boys, school projects, a controlling father and dealing with the mother she has yet to meet. With the impending return of the mother she never met, Mariska comes to find out just how much of her life she has lived in her mother’s shadow.

When science and technology tremendously extend the life span, what do you do with convicted violent criminals? Leave them in jail for hundreds of years? Or do you let them out in a “Controlled Experiment” like Tom Purdom posits in his new story. But this brave new world also opens up a whole new range of crimes that can be committed.

“Sails the Morne” by Chris Willrich is a rollicking story of intrigue and tolerance. The Outer Solar System has been colonized by various alien races, and our economy is in tatters from their trade and technology. When Brick, the Captain of the Earth ship Eight Ball is hired to transport a priceless collection of ancient Irish books to an alien cultural conference out in the Kuiper Belt, along with several alien ambassadors, he finds more trouble than he bargained for. With a mysterious ship trailing them, a crew that is just this side of slapstick and a possible alien cultist on board, the journey rapidly becomes perilous to all aboard, until the final betrayal sparks Brick into action. A story with all of the Golden Age action you could want and a hilarious crew to boot!