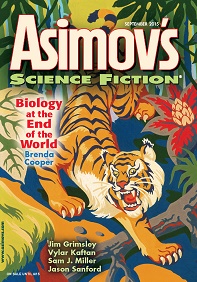 “Biology at the End of the World” by Brenda Cooper

Brenda Cooper writes solid, well thought-out real world science fiction. She does this again in “Biology at the End of the World.” The story is about the Earth’s death due to humankind’s depredations. Two doctors who represent the “UN Biodiversity Protection Unit” visit space habitats to see that no gene work is going on. All flora and fauna must be exactly as it was on Earth in order to save what is left. The earth is turning into sludge and pollution, but because of some very nasty biological problems in the early days nothing may be produced but species common to Earth. Thus, in the course of the story they find themselves on a habitat flaunting the UN’s jurisdiction and working on completely new biota. Or as the UN Police call it “playing god.” It is an all too possible scenario but the characters do not have enough depth to take you inside the story. Because of that the situation remains rather unimportant without the tension it should have.

Jim Grimsley is a favorite SF writer of mine. He writes far too little and I am always interested in a new story from him. “The God Year,” however, disappointed a bit. It has an interesting premise–sometime far in Earth’s future, humanity has devolved and become uneducated. Our narrator is Roufos, a female married to Mabus–the handsomest man in their small village. He is an angry man who beats his wife and philanders all over town. One of the gods from a vast system of gods comes each year to take over the body of one person in the known world and so live on Earth. It turns out that their tiny hamlet of Muglet is to be the place the god will manifest. Are the visiting gods aliens? Uplifted Humanity? True gods? It is a situation ripe for exploration. The milieu is well delineated. The devolved English is nicely handled. The characters are interesting enough to hold your attention, but the climax is so predictable that it loses much of its power and you are left feeling a bit let-down.

“Duller’s Peace,” however, by Jason Sanford does not disappoint. It’s a moral indictment of other nations trying to control a people or a country. Serija has grown up in a rebellious country which has been pacified by “The Nation.” The Nation has accomplished this by creating nanos which can read people’s thoughts. Her country is covered with them. She and her Grandfather, a famous freedom fighter, breathe them in, eat them in every spoonful of food and are never free. If you think bad thoughts–of anger against The Nation or thoughts of violence and rebellion you are punished. If you are a good citizen (in The Nation’s eyes) you are helped.

This is a powerful story that is extremely relevant in the world today, yet is clearly true SF as well. Well done, Mr. Sanford, well done.

Sam J. Miller is a new writer. I find his writing to be interesting and highly emotional. He creates believable characters and brings them to a breaking point that resonates with the reader. Here he posits another possible and very scary future. Global warming has taken its toll–New York City is under water and Greenland has become a major world player. We follow the sad life of a New York refugee who married an upper-class Swedish woman but who could not find work. They divorced after having one son–Thede. Thede is now 15 and his father is coming home after three months on a calving ship. The ship calves icebergs in order to tow them various places in the world for their pure water. The story takes place over this particular shore leave before the father ships out again. Thede is suddenly an unknown person to his father. The lovely young boy who loved his dad has been replaced by a surly teenager. The relationship between the two is excellent because the characters are so well drawn. But, I have two caveats about this story. One is that while set in the future it doesn’t need the SF trappings. They do not in any way impinge on the course of the story. But the second is a little worrying. The climax of the story is exactly the same as Mr. Miller’s story I reviewed last month. Now he may be doing a variation on a theme here with various parents dealing with the same struggle with their sons. If so, I can appreciate it. But soon, he needs to branch out to new ways of dealing with the topic that evidently concerns him.

Vylar Kaftan is another good new writer. She writes with poetic ease. “The Last Hunt” however, feels more like the first chapter of a novel. Understand–I liked it very much and would love to read the novel, but this is not a story. It takes place in the far north where two Inuit boys are hunting. One is a “sipiniq,” a man born into a woman’s body. This will be his last hunt as a boy for he will have to live now as a mother. The situation of the ice and cold, and the relationship between these two boys is fascinating. Then an alien crash-lands near them and they investigate. The immediate situation is handled, but nothing is in any way resolved, either for the characters or the consequences of the alien landing. Read it and wait for the next installments or the book.

“Searching for Commander Parsec” by Peter Wood takes the idea behind Harlan Ellison’s “Jeffty is Five,” of a radio playing old radio shows that are impossible. Mr. Wood takes this into a farcical direction rather than the poignancy of the other tale. It is light and fun.

The final novelette is by a very new author, Sean Monaghan. And I believe that this was my favorite of the issue. “The Molenstraat Music Festival” is science fiction based around the art of music. Specifically, it concerns a cello player who has had an accident and goes into fugue states while she is playing. She has lost her ability to play for the public or in an orchestra but her playing is so passionate and beautiful that her mother brings her to an 87 year-old man named Clancy. Clancy was a fairly famous cellist in his day. The mother believes that he may be able to teach Eleanor enough to audition at the festival. The SF portion is a bacteria that can repair her brain scarring and reconnect neurons damaged in the accident, but people who do that come out differently than when they went in–not in big ways but small ways. Eleanor refuses to do it because she believes it will change her deep passion for the cello.

The story is quite sophisticated in using Clancy’s inability to use this technology on his arthritic fingers running in tandem with Eleanor’s struggle. The characters are fleshed out and Clancy’s smart home on a far-off world is clever and understated. This is a most impressive early story in Monaghan’s writing career.