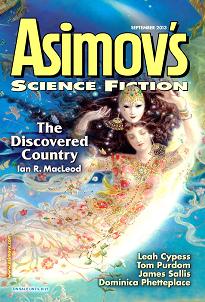 “The Discovered Country” by Ian R. MacLeod
“The Unparallel’d Death-Defying Feats of Astoundio, Escape Artist Extraordinaire” by Ian Creasey
“A Hole in the Ether” by Benjamin Crowell
“What We Ourselves Are Not” by Leah Cypress
“As Yet Untitled” by James Sallis
“A Stranger from a Foreign Ship” by Tom Purdom
“That Universe We Both Dreamed Of” by Jay O’Connell
“What Changes You, What Takes You Away” by Dominica Phetteplace

Asimov’s for September turns out to be one of its weaker issues of the year but does contain one superior story, “The Discovered Country” by Ian R. MacLeod. On the surface this is another “what-happens-after-we-upload-people-after-death-story” but it uses this template to tell a devastating story of love. Northover is a fairly unknown musician but becomes a billionaire because one of his melodies is chosen for the world ring-tone on mobile phones of the future. This, in a post scarcity world, gives him the funds to have himself uploaded at his death. His main reason for uploading is to see his ex-girlfriend who in life became a star so huge that everyone on the planet loved and adored her, while he fell into complete decline. The story starts after he is uploaded and is meeting Thea for the first time. From there it explores not only their love, but his convictions about disparity between the wealthy elite and the normal man in the real world. As with all of MacLeod’s work it is intricately written, with characters who are very well realized but never exactly what you think they are. The ending contains an emotional punch. I think it’s one of the best of the year.

The rest, while interesting in many ways, pale in comparison.

The wonderfully named “The Unparallel’d Death-Defying Feats of Astoundio, Escape Artiste Extraordinaire” by Ian Creasey is an enjoyable romp about a future magician using his “magic” abilities to escape a black hole. It’s written from the point of view of Astoundio himself so we are in on the trick, which works within the SF framework logically. This is a fun idea that is handled well.

I can’t say as much for “A Hole in the Ether” by Benjamin Crowell. It sets out to rework Bradbury’s Fahrenheit 451, but in the future of books as downloads rather than burnable copies. The movie studios of this near-future have deemed piracy of their materials to be punishable by death. They have bought the novels of yesterday and held them in perpetuity or until release of the “movie.” As you can see, the setup is convoluted. Then the author adds three viewpoint characters that change without notice. These three are involved in a piracy felony that extends to a whole library being discovered. The parallels to Bradbury are clear, but the story is not. There is way too much information and characters crammed into this novelette for it to be anything but confusing. It’s a great idea that needs to be explored as a novel.

Leah Cypress writes stories about interesting aspects of the “if this goes on…” variety. “What We Ourselves Are Not” is a good example of this SF trope. Teenagers are able to be chipped to become more appreciative of their various cultures – so that humanity does not become a monoculture. Zach is at the point when he must choose to get his “Jewish chip” implanted or not. His love, Amy, has already implanted her chip. Unfortunately it is a Korean chip. This pushes her away from Zach because her goals have changed. Her desire is now to continue to diversify the human race by remaining more purely Korean. This conceit was truly interesting, as human beings try to work out scientific accomplishments in the real world. Cypress makes it personal with well-drawn characters but has no simple yes/no answers or right/wrong ideology.

James Sallis in “As Yet Untitled” creates a surreal portrait of actors (?) who become characters in other people’s stories. Or perhaps the protagonist is an android designed for that purpose. Or perhaps he is a product of the written author’s mind that becomes whichever character he needs in the stories he writes. Or… As you can see it is a clever piece of writing in a slipstream style. Short and humourous.

Gerdon is a man with the power to insinuate himself into another person’s mind and take them over. He uses this to find out secrets for a price. “A Stranger from a Foreign Ship” by Tom Purdom starts out with Gerdon chasing his target. It resolves into a familiar plot of intrigue, with Gerdon using his powers as the one wild card. It is competent, but not very memorable.

“The Universe We Both Dreamed Of…” by Jay O’Connell is a pleasant piece about aliens who visit Earth and interview each individual. The reasons are not known. There is no hostility, just simple communication. In the course of the story we view one such visitation and discover the aliens’ intent. A pleasant read.

The final tale, “What Changes You, What Takes You away” by Dominica Phetteplace is an odd little story about aliens contacting a Down’s syndrome person who is undergoing an experimental drug program to help Alzheimer’s patients. It has touches of “Flowers for Algernon” (mentioned in the story) as she and the mice being experimented on form a bond. The story includes reincarnation, aliens, experimental medical subjects, Down’s syndrome, Alzheimer’s, while cramming all of these themes and plot devices into one short story. Any one or two would have been enough, but it was, like the Benjamin Crowell story above, too overcrowded to work at this length.

Even if this was not the best issue of this venerable magazine, it continues to push boundaries and give us many of the best stories each year.