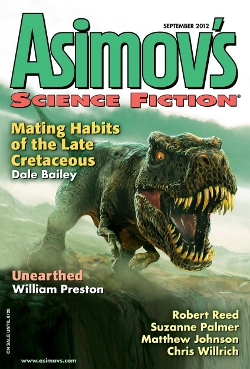 William Preston‘s “Unearthed” is set in the Andes in 1925.  Its narrator is a woman named Qwerty, a writer who has come at the request of the owner of a local mine to chronicle the legends of the indigenous people.  The mine represents the only civilization for hundreds of miles and offers the only employment.

A cave in at the mine traps the only remaining manager and survivors of the incident develop strange symptoms.  Qwerty takes charge and radios for help. Help arrives by air in the form of one man.  He and Qwerty together begin to unravel the mystery of what happened underground.

Preston has written a story very much like the adventure stories from the 1920s.  But Preston has added a couple of twists to keep it current.  I liked the story in that once I started it I had to finish it.

“Mating Habits of the Late Cretaceous” finds Gwyneth and Peter a married couple who appear to be solid members of the middle class.  But, after several years of marriage they’ve grown apart, something you can’t really attach any blame to.  Gwyneth decides that a vacation will fix the marriage. But it will have to be something special, like traveling back through time for a look at pre-historic earth.

They choose to go to a resort in the Cretaceous period which features all the comforts of home and more.  Specifically, it includes daily treks into the wilderness with guides, provided by the resort and armed to the teeth to protect the guests from local flora and fauna.  Each guest wears a “yoke,” a bracelet which will automatically pull them back to their own time if they land in danger.

Dale Bailey has created a story that’s built around the relationship of two people: Gwyneth and Peter.  Because of this, “Mating Habits of the Late Cretaceous” appears to be the kind of story that could easily be set in contemporary times.  But Bailey manages to tie in the time travel element in a significant way.  I liked this story.

“Noumenon,” the title of Robert Reed‘s story, is a word borrowed from philosophy which means something in the way of believing in the existence of something without any sensory data to support it.  Reed’s story is about a search.  His main character is a xeno-researcher named Mere.  She works alone from a small ship.  Her base is a large ship, the Great Ship, which is on an intergalactic journey.  When she goes missing and becomes overdue for an extended period, the reason becomes the focal point for the story.

Reed includes a parallel story that offers an approach from another perspective.  This yarn isn’t really my cup of tea but I have to give the author his due–he does get his message across.

Let’s face it, myths, legends, and fairy tales are constantly being recycled and re-told.  “Star Soup” by Chris Willrich very openly adapts a certain tale, placing the scenario light years from Earth and creating characters familiar to a contemporary reader but which serve a science fiction plot very well.  He manages to do all of this without exploiting the tale this was originally based on.

I liked it for a number of reasons, foremost being that despite the familiarity of the situation I really wanted to know how this one would end.

Saufatu has a home in cyberspace which he plugs into while he sleeps.  It happens to be “real,” compared to many other places in cyberspace, in that it once physically existed as a small group of islands in the Pacific that was his ancestral home.  When the waters rose these islands vanished and the location in cyberspace became its record.

In “The Last Islander,” Matthew Johnson tells the story of a displaced people and he does so particularly well.  Outside of cyberspace Saufatu lives among the former islanders within a larger population.  Their common interests include their islands in cyberspace and how its future will affect theirs.  I liked this story.

Olympia Silvers was born and raised on Mars.  As “Adware” opens her son, Jake, has picked up some invasive adware and is parroting lines from a commercial.  When a home based technology fails to deprogram him a visit to a local clinic is required.

Suzanne Palmer‘s “Adware”  concerns a woman trying to deal with life the way most people everywhere do: by solving the problem.  Olympia’s problems are probably shared by most people on Mars: their relationship with technology, real estate (location, location, location) and last but not least, other people.  But this isn’t simply a contemporary story transplanted to a distant time and place. Palmer’s thrown in a twist that makes it a good science fiction story.  This one is a must read.