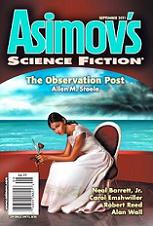 Allen M. Steele’s “The Observation Post” could easily be misconstrued as an alternate-history/steampunk tale early on, as its protagonist and his surrounding cast of U.S. Naval officers are stationed aboard the Centurion – an N-class airship (otherwise known as the oft underused blimp) – in 1962. However, the story is played straight with plenty of military history to explain the uses of blimps during the Cuban Missile Crisis, wherein the tale is set. The use of the blimp here, though, serves as little more than a plot device to get certain characters to a certain island location, after which the story is derailed until it grinds to its final conclusion involving the all-too-common observers-from-the-future-inadvertently-affect-the-past SF trope.

But despite the disappointing conclusion to a strong introduction, the main problems lie in the writing itself. Descriptions are matter-of-fact and do little to develop any kind of atmosphere which could enhance a reader’s immersion, and events which should be points of conflict and tension are easily hurdled or questionably handled by the characters.

On the other end of the spectrum is “Shadow Angel.” Author Erick Melton clearly understands what is and what isn’t happening in his hard-science fiction tale, but the reader may not. Protagonist Emil Bachev’s job seems to be at the helm of a starship diving through sponge-space for the purpose of re-shaping a star into a wormhole. Or that’s my best guess, anyway.

The narrative tosses the reader around in time and within Emil’s memories – the side-effect of his occupation. The problem with this is that the reader is never sure what is real and what the point of these flashes of consciousness is. There is a confusing love story (or more accurately, lust story) between Emil and a woman named Haneul and her new lover, Meng, captain of another ship. There is also a flashdrive, shadows, and a lot of confusion. It reads like a side-story set within a larger, established universe.

Disappointment continues with Alan Wall’s “Burning Bibles,” an arsonist-mystery story painted over in post-9/11 paranoia. When two warehouses – one in Cornwall, one in New Jersey – containing King James Bibles are burnt down, with only the mysterious word INFOUT connecting them, secret government agencies on both sides of the Atlantic take interest. Enter Agent Tom.

Also known as Brother Tom, he is both deaf and dumb, but compensates for these challenges by being a mind reader. Tom is sent in to infiltrate the printing company to gather information, in case it was an inside job. It is an intriguing premise with plenty of possibility. But in this case the plot has a short reach and never utilizes Tom’s amazing power to any great extent. Tom could have been replaced with a regular, powerless agent with only a few alterations to the narrative.

Neal Barrett Jr.’s “D.O.C.S.” is also driven by a mystery. Members of the Department of Curative Science (D.O.C.S.) are unwelcomed by 13-year-old Bobby and his family; actually, they’re absolutely detested. Although the story’s setting is never fully revealed, it seems to be a dystopian-America divided into two by very strict lines. The D.O.C.S. are seen by Bobby’s relatives and townsfolk as harbingers of bad tidings. There is a good deal of tension throughout.

While it is hard to pinpoint who the narrator is, there is a consistent rural-slang to the prose which draws the reader into Bobby’s house. The mysteries are built through dialogue that talks around the subject, giving the reader only snippets of information, but never revealing very much. While this could be frustrating to some, Barret Jr. handles it with an astute hand which only leaves the reader wanting more. This is the shortest story in this issue of Asimov’s, but the only one I wished was longer.

Veteran storyteller Carol Emshwiller’s “Danilo” is best described as charming. Lewella, a woman whose age is never given (and nor should you ask!), but presumably is getting along now with her mostly all white hair, is preparing to be married. The groom is Danilo, a man whom Lewella has never met, and may not even exist, or so the narrator would have you believe. Told from the point of view of Lewella’s best friend, the two set off in search of the man of their dreams.

There are no discernable instances of SF, however, other than some unexpected events which could just as easily be explained away as coincidence. But Emshwiller’s style is easy-going, comical when it needs to be, and whimsical everywhere else. Just as Lewella’s friend follows her around, and they sneak through fields and gardens, so does the reader feel like a tagger-along on the hunt for happiness. “Danilo” alone makes this issue worth reading.

With Ian Creasey’s “The Odor of Sanctity” strong story-telling continues. Father Francesco, an Italian-born priest currently residing in Manila in the Philippines, has been struck with a wasting sickness that has left him unconscious lying on his death-bed in a hospice. Francesco, known throughout the area as a man of God, teacher, and philanthropist, is at the center of attention, but it is through Dora, one of his former students, that the story develops.

Dora feels she owes much to Father Francesco. As her teacher, he has brought her from a world of poverty to law school. Francesco was a pillar of his community, and Dora wishes she could provide him with more solace than her humble prayers. Although he cannot see or hear, she realizes he can still smell, and with the Olvac filters – scent gathering devices, and the impetus of the story – she may be able to acquire fragrances from his youth spent in Italy.

It is from here that the story takes off and questions arise: Do ends justify means? What are the consequences of our actions? Can anyone be trusted? Although there is no great tension surrounding the climax, “The Odor of Sanctity” is a tightly written, thought-provoking story, well-worth reading.

There is a dark sense of humour in R. Neube’s “Grandma Said,” which is apt considering Grandma said laughter is the best medicine. Her grandson, Victor, narrates his experience of being both a high school student and a Cleanser. Set on one of the post-Earth colonies, Victor works part-time helping to eradicate the deadly spores that cause cholly fever. Between balancing his work, his past mistakes, his parents, and his hormones, Victor paints an unsettling image of a world living in fear with a touch of teenage cynicism.

Neube’s world-building harkens back to the days of classic SF, with extra-planetary colonies, new life forms (even if it’s only fungus), and a touch of humanity to keep it all relatable. I can find no faults with what “Grandma Said.”

Finally, there is Robert Reed’s “Stalker.” This could easily fall under horror in another publication, but is best described as dark science fiction here. The story follows a spider-and-fly structure with a serial killer and a resilient female victim. The difference here is that the narrative comes from the killer’s Adorer – a drone he is telepathically connected to, which carries out his every command in return for his attention and affection. The problems arise from the drone’s obsession and insecurities.

While the concept feels original and Reed’s prose supports the uncomfortable atmosphere with tension-filled imagery, the story does not attempt to go far enough into the relationship between the killer and the drone, avoiding questions of who really is the stalker. Instead it goes for a quirky end, which feels a little weightless.