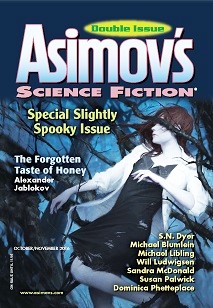 “The Forgotten Taste of Honey” by Alexander Jablokov

“Eating Science with Ghosts” by Octavia Cade
“The People in the Building” by Sandra McDonald
“Wretched the Romantic” by Michael Libling
“Water Scorpions” by Rich Larson
“The Leaning Lincoln” by Will Ludwigsen
“Lucite” by Susan Palwick
“Project Extropy” by Dominica Phetteplace
“When Grandfather Returns” by S. N. Dyer
“Choose Poison, Choose Life” by Michael Blumlein

The October/November issue of Asimov’s starts out with Alexander Jablokov‘s “The Forgotten Taste of Honey,” the story of Tromvi, a trader with an important sideline. In this world, when you die, you must be buried in your home area, and part of what she does is take the body back home. Her latest charge, Remu, causes some problems. The Passkeeper—who guards the roads, forces her to take Remu via an unfamiliar route, where they run into the feral girl Oppi, and bigger problems than she expected. This is a richly built fantasy world with a well-thought-out mythology, and overall a very compelling story.

“Eating Science with Ghosts” is a gustatory trip all over the world, where the protagonist has meals with various famous dead people. Octavia Cade concentrates on the images and personalities, but I didn’t feel it really gelled as a story.

“The People in the Building” by Sandra McDonald is primarily a listing of the various people working on different floors, which include aliens and monsters. Ultimately, the building comes under siege by the latter. The story was weak on plot, but the weirdness of the descriptions and the events kept my interest to the end.

Michael Libling contributes “Wretched the Romantic,” about Richard, a former advertising man forced to find employment mowing lawns. His wife finds his lack of ambition frustrating and soon leaves him. But something happens when Richard is asked to scatter the ashes of the husband of one of his clients: he accidentally inhales. And it begins to change him. The story is quite weird (and I mean that as a positive) and ends up going to places I never expected. Definitely a highlight of the issue.

“Water Scorpions” by Rich Larson is about Noel and his new brother Danny. Danny is an alien who’s been changed before birth into a simulacrum of a human, who joins the family after his new sister was stillborn. Naturally Noel is not comfortable with this. I thought Noel’s problems were very real, and the story ends strongly, though in a type of plot that goes over well-worn ground.

Will Ludwigsen‘s “The Leaning Lincoln” is a toy that a friend gives to Scott, an old lead figure of Abraham Lincoln that, due to shoddy manufacturing, leans off to the side. Scott quickly discovers that the toy is a jinx, causing troubles wherever it goes. The bad luck causes a rift between Scott and his selfish and borderline abusive father, but becomes a way for Scott and his mother to find a new life. The story was well plotted and fascinating to read and see what might happen next.

“The tenth circle of Hell has a gift shop,” begins “Lucite” by Susan Palwick, and the story continues on with that premise. Andrew is taking a tour of (literal) hell and, in the gift shop buys a lucite block with a colorful figure inside it—something like a moth—which is the soul of a Herbert McManus. Andrew begins to wonder about McManus and works to track him down. The story seems at first to be going in an ironic and sardonic direction, but slowly moves to a more serious tone, to a strong resolution.

Dominica Phetteplace‘s “Project Extropy” is the story of Akiko, who is spoken to by God. Or, at least, a voice that certainly has godlike qualities. Akiko knows nothing of her past, but goes into a futuristic San Francisco, where she is guided by the voice. This is tied in with Phetteplace’s “Project Entropy,” which appeared in the July Asimov’s and which I reviewed. My comment then still applies: “The story reads as though it were the middle chapter of a novel.” This one also doesn’t stand on its own (most of the characters are new, though one on the periphery I remembered from the earlier story). The introduction indicates that this is indeed a novel in progress, and I’m sure they’d be more effective at that length and if the entire story was told at one time. As it is, there are just incidents that lead to nowhere, though this seemed to hang together better than the July installment.

I genuinely liked reading “When Grandfather Returns” by S. N. Dyer, starting out among Native Americans of the distant past. Thunder Cries is a disobedient child who is sent to live with Sky Spirit when his parents grow tired of his misbehavior. He grows up among the gods, then comes back to Earth when grown. We then cut to the present, where Strong Horse, an old Navaho code talker is having behavior issues with his grandson Dylan. The two stories come together in surprising ways and there’s a nice understated sense of humor throughout, especially in the vivid character of Strong Horse.

Michael Blumlein finishes things with “Choose Poison, Choose Life.” The story concentrates most on Violet, who is contemplating suicide in an ocean spot where there are two islands (with a mythological origin) off shore. These each have a woman marooned on them: Daisy on one; Rose on another. A mysterious stranger named Seth (who might be an angel) comes to her to dissuade Violet, and her struggles alternate with the struggles of the women on the islands. This is metaphor territory and, even after two readings, I still don’t see how the women related to Violet except in the most general sense. The individual scenes are well done, but it doesn’t really gel, and, of course, given the situation, the result is hardly surprising.

This issue of Asimov’s had far more fantasy stories than usual (and one that’s in the high fantasy vein), which is all to the good. Overall, there’s plenty of first class reading.