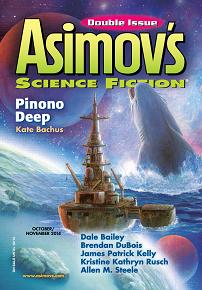 “The Prodigal Son” by Allen M. Steele
“Stars Fell on Alabama” by Gord Sellar
“Troop 9” by Dale Bailey
“Diary of a Pod Person” by Emily Skaftun
“Playing with Reality” by Kristine Kathryn Rusch
“Pinono Deep” by Kate Bachus
“Minutes to the End of the World” by Brendan DuBois
“The Witch of Truckee” by Joel Richards
“Uncanny” by James Patrick Kelly
“Decaying Orbit” by Robert R. Chase
“The Cloisters” by Jeff Grimshaw
“What is Sand but Earth Purified?” by Jason Sanford
“New Trick” by Tim McDaniel

“The Prodigal Son” by Allen M. Steele explores the ethical dilemmas and resulting religious zealot backlash were humans to actually design a way to populate a world in another star system using currently conceivable technologies, by flying at 0.5c and transporting just genetic materials, not actual passengers. The main character is an aimless son who makes good over the course of the story (thus the title). He eventually integrates himself into the great and noble escapade which his ancestors started and his parents finally managed to finish, the launch of the first interstellar settlement craft.

He helps out with PR and media relations because he’s not much good at anything technical, so his parents apparently decided to give him the most sensitive of jobs out of an overabundance of confidence in his ability to turn around. Regardless of his parent’s misplaced confidence, he finally starts to back the project when he decides he really wants to get with a particularly sexy engineer who has made this her life’s work. Her belief in the project, and her own personal genetic commitment don’t so much inspire him as set the parameters of their relationship. Eventually he realizes that he wants her enough to drink the Flavor Aid along with everyone else, but his reasons for doing so feel shallow, and his exploration of the moral factors of their endeavor seemed even more so.

The story makes a lot of parallels between belief in religion and belief that humans should populate the galaxy. The most poignant is that people with weak belief structures (i.e. they just don’t give a damn either way) are prone to fall into line with hard-core believers if they fall in love or lust, not because they actually take the emotional and intellectual time to make a conscious decision to follow a particular path.

“Stars Fell on Alabama” by Gord Sellar does its best to provide the flavor of jazz in a story format. For fans of jazz, particularly early jazz, the story provides an uncommon look into the life of a performer of that art, someone fighting to get by in a time of racial injustice that made post civil-war United States society a sewer drain of hypocrisy and hatred. However, as it’s only a written story, none of the bright notes and soulful improvisation comes across on the page, so we must do our best to imagine.

The story sang best when “Baby,” a jazz musician, former slave, and collector of several lifetimes worth of wisdom, tried to puzzle out a way to escape a train filled with white people who might turn on him at any moment—a Mafioso killer, and two women who for various reasons want something that he has to give. The flashbacks about his reasons for living too long started to drag, though, as written description failed to convey the auditory nature of the revelations he had acquired over his years. Still, the compelling combination of physics, racism, love triangle, organized crime, and train caper make this story the star of this issue.

Dale Bailey’s “Troop 9” sticks in the memory after reading like an old bullet fragment. Troop 9 is the story of a town living in fear of a girl scout troop gone feral, living off the land, and eventually picking off the town’s pet pooches and more. The townspeople’s fears eventually shift from fear that their young women have been spirited away to fear that their young women will spirit their citizens away. Eventually the townsfolk deal with the problem, in the tried-and-true American fashion, with all the moral ambiguity that entails.

“Diary of a Pod Person” by Emily Skaftun tries to put a hard science spin on the concept of saving a human body like a save in a video game. It asks whether we would lose out on the things we used to love because those things aren’t part of our programming when we get rebooted. It considers whether it would be better or worse, but the assumption is that the solid feelings of love and affection, hatred and fear, will disappear when the reboot happens. While this seems like a reasonable question to ask, the elephant in the room really is that the original person, the actual person who died, is now dead, and the new person is actually not the same person. The emotional differences between the two versions of the protagonist make this painfully clear, but the story leaves that particular stone mostly undisturbed.

“Playing with Reality” by Kristine Kathryn Rusch is about a rich girl who plays at a men’s-only golf course. She’s a member mainly due to a misunderstanding based on her name, “Charlie,” and some mental gymnastics played by the lackeys at the country club. When she realizes she belongs to a place that discriminates and doesn’t allow female members, she decides… Actually, before she can decide anything, she gets saved by a fictional character who happens to be a super hero, a member of British royalty, and who also happens to be living a calm life in the public domain, while golfing at a men’s-only golf club.

Despite the strange characters surrounding her, in the end, the story seems to come back to the fact that she’s a woman who’s about to lose an important membership and networking opportunities. So, is this a simple matter of gender equality issues? If so, why the strange cavalcade of fictional characters? Is it a metaphor? If so, what is the purpose of choosing super heroes?

Perhaps the country club is supposed to stand-in for the ‘men’s club’ of successful super heroes and our plucky (ignorant) rich girl is a stand-in for a woman who wants to break into that world. This seems to be the objective. Thing is, the story seems to forget, or deliberately ignore all the popular women super heroes who have already broken into that world, everyone from Wonder Woman, to Hermione Granger, to Buffy the Vampire Slayer, to Elsa the Ice Queen. They’re never mentioned, so the metaphor falls flat. These women clearly have boatloads of super hero street-cred, and ignoring them puts the rich girl back into her original position, as a woman trying to get into a country club where she’s not allowed, and being saved by a man.

“Pinono Deep” by Kate Bachus follows a crew who have mutinied during a hunt for an alien sea creature worth a fortune once returned to port. The icy adventure skates from disaster to tension to disaster again, as the crew deals with being caught in deep ice, without a captain, as a dangerous leviathan approaches. The trip culminates with a bizarre trip into darkness that feels both unique and familiar.

“Minutes to the End of the World” by Brendan DuBois reads very much like county board minutes, and is devoid of most customary prose elements, such as descriptions of speakers and locations, but the conversations recorded in the minutes make it clear that the world has ended and even clearer that this small town has gone to very drastic means to both pretend they’re normal and to keep themselves pure. The record shows how real fear, anger, and resentment can create a culture with pathological tendencies.

“The Witch of Truckee” by Joel Richards reexamines the old question of why people with super powers hide them. In this story someone with the power to avoid death by fire is encouraged to “come out.” It’s no surprise that the witch has the typical fear of being dissected for science by certain untrustworthy government agencies.

“Uncanny” by James Patrick Kelly is the best attempt at fun in this issue, possibly the only one. One female, slightly on the rebound, gets a gift of a human-ish robot that cooks, cleans and otherwise treats her like royalty. Of course, people being people, the robot can be modified with the appropriate after-market parts to build a fountain of sexual happiness, which she does right away.

On top of all that craziness, there’s a punch line. The story is pretty short, but in this case, it’s not the size that matters.

“Decaying Orbit” by Robert R. Chase puts a small reconnaissance crew in a tough situation as they believe they’ve stumbled onto a critically important piece of technology that could shift the balance of power in our galaxy, allowing one of the three warring factions to eradicate the others. It’s a mystery that the space station exists, and even more puzzling is how it became critically damaged. As it falls into the planet below, the crew must decide what to do when orders aren’t enough.

“The Cloisters” by Jeff Grimshaw enters the realm of the absurd and sometimes in reading it, it’s unclear whether something’s actually happening, or just happening in the head of the main character, who has had a brutal day. He just walked in on his girlfriend treating his roommate to a tonsil-tickling session, while at the same time carrying the ring he planned to wed her with in his pocket. This is the most normal thing that happens in the story, which bends around backward as the jilted lover takes a trip to The Cloisters (a branch of the Metropolitan Museum of Art in New York) and discovers both a potential lover and time-space portals.

“What is Sand but Earth Purified?” by Jason Sanford observes the observed as a constantly-watched celebrity decides to invade the most dangerous island on Earth. A nanotech system has claimed the island and surrounding ocean—it purifies everything that comes near into sand and water. Strangely, the former residents of the island not only occasionally return there, but the nanobots also occasionally allow them to bring guests. So, the celeb hires a local, and together they ride out to the island on genetically modified kayak-animals. Why the former resident would take this person with him when she’s obviously trying to manipulate him becomes evident when he arrives on the island.

The uncertain level of technology produces some awkward moments as a reader, as the mechanics of the nanobots and the value of human life aren’t quite what they seem when the story begins.

“New Trick” by Tim McDaniel has the most appropriate Halloween tie-in in this issue. Yes, it’s got werewolves, but it’s also got a guy who just wants to stay inside, turn off his lights, and pretend he’s not at home. Recommended for hairy introverts with anger management issues.

Harlen Bayha is composed of approximately 65% oxygen, 18% carbon, 10% hydrogen, 3% nitrogen, and a peppering of calcium, phosphorous, and other.