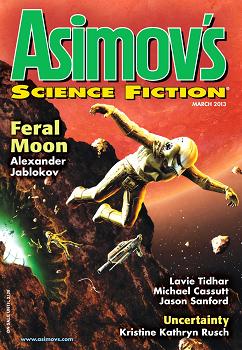 If hard science fiction crossed paths with Michael Bay, it would be “Feral Moon.” This is a cluttered, dense story with too much focus on scientific substance and not nearly enough on style or meaningful plot details. The main character is Kingsman, an intelligent soldier with a bad record, given the chance to redeem himself, if not in the eyes of others, at least for the greater good. The setting is the moon Phobos. It is a refuge and a battleground. Why it’s under attack and by which side is consistently obscure, with tactical decisions never explained. The story is a long, confusing mess that is a chore to trudge through and best left avoided.

The only certainty in this WWII-era time travel story is intrigue. Leah is an agent sent back to various points (temporal and special) in and around the war. Her focus is Werner Heisenberg, one of history’s greatest minds and a man dangerously caught up in Hitler’s attempts to harness and militarize atomic energy. Leah is a master linguist and a woman who can blend in with her surroundings, making her an ideal agent in time. But she is quickly caught off guard by a mysterious man, and saying any more would ruin the story.

If anything could be critiqued about “Uncertainty” it’s that it could have done with some trimming. There are sections that feel like they could have been more interesting with less superfluous information. That being said, it’s a fun story and one of the few that respects the time travel genre without needing to get bogged down in the theoretical science behind it.

Thailand of the future is a lot like Thailand of the present. Those passing from life to death are venerated; their transition treated with respect. Somchai, a monk, is tasked with performing the funeral rites for the recently deceased, those hunted for being infused with nanos, which give them the ability to regenerate. How much can be regenerated is what matters to Somchai, who isn’t sure if he’s wrapped up in a spiritual or a technological predicament.

Jason Sanford is able to create an astonishing amount of detail in his characters, setting, and rules, using few words. The prose is able to breathe without being bogged down in the details. More can be said, but the story should be allowed to speak for itself. This one is a must read.

Straub lives with his step-mother, sister, and his brother’s fiancé. Their lives are difficult: there is a battle against California, and not nearly enough food to sustain themselves. In this bleak future (near or far), death, like those of the combatants, does not mean the end of life. Reincarnation is a commonality in this world. Honourable soldiers may return as eagles. Straub’s brother returns as a pig. What is a family, slowly dying of starvation, led by a mother-once-a-wolf, to do?

Garret Ashley’s work gives the reader enough information to make this question difficult to answer. And that is the mark of good writing. Readers are left to question how they would react in such a situation, and “Brother Swine” has a lingering effect that will keep one wondering long after, as few stories do.

“Needlework” is written well, but could be distilled to a much shorter story. The alternative would be to include more substance, because the majority of it is little more than cyberpunk descriptors of a technology laden future, with spare parts littering streets and designer body modifications adorning the wealthy. The story, what plot there is, revolves around a seamstress and a chef, both of whom dream of living among the stars in the Up and Out. Little develops and what does is not surprising.

How do you pitch a movie set on Mars? Hollywood has tried, but with limited success. The problem really is our understanding of what’s there. With the rovers giving us a clear view, we can see that nothing much is going on there right now. The days of classic science fiction are gone, where little green men plotted our destruction from their red rock. The more we know the less we can dream, and that’s precisely what “Pitching Old Mars” is telling us. No, the only way to do Mars now is to go back. Going back to a time in Mars’s history that we don’t yet understand and contemplating what it could have been. That’s where the stories are now. Then.