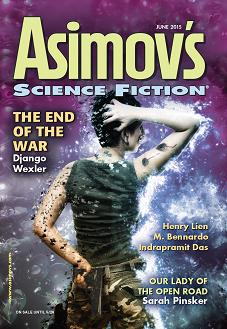 “The End of the War” by Django Wexler
“The Ladies’ Aquatic Gardening Society” by Henry Lien
“Ghosts of the Savannah” by M. Bennardo
“Our Lady of the Open Road” by Sarah Pinsker
“Mutability” by Ray Nayler
“The Muses of Shuyedan-18” by Indrapramit Das

This issue of Asimov’s is a strong one and shows how well science fiction and fantasy can tackle contemporary issues of gender and sexuality while retaining a Golden Age “sense of wonder.”

Django Wexler’s novelette “The End of the War” is set in a far distant future dominated by conflict across the Solar System between the Circeans and Minoans. I am not a big fan of “military SF” and found it difficult to get into at first. But Wexler builds what becomes an intriguing story around the idea that most of the war craft operators are women: “There aren’t many male operators. Not the fault of the men, of course, they’re as patriotic as the rest of us, but they’re just made differently. The male psyche doesn’t deal well with the waiting, the confinement, the high-G transits.” By constantly subverting gender expectations Wexler kept me interested, though the ending felt a bit perfunctory.

In “Mutability,” Ray Naylor riffs on Shelley’s Poem Of Mutability to produce an enigmatic and stylish short story that is weak on plot but strong on fin de siècle atmosphere and full of strange images like this one: “In the distance, down a turn of the river, the sections of a residential skyscraper slowly rotated, changing which of its balconies had a view of the river below.” Naylor imagines a future in which people will live for hundreds of years and asks questions about how memory, relationships and our sense of place will cope with that. I felt the urge to read it again and found it even stronger the second time round.

While Henry Lien’s story is about rivalry between two women, M. Bennardo’s “Ghosts of the Savannah” is about the opposite: the co-operation and support that two “hunter sisters” give each other. Set in the distant past, it describes the travails of a tribe struggling to survive the vicissitudes of changing seasons and changing power relations between the sexes. Bennardo is very good at conjuring up the strange atmosphere of the savannah in vivid and poetic prose.

“Our Lady of the Open Road” by Sarah Pinsker is the standout story of this issue. Set in a near future America it imagines a frighteningly familiar and credible insular world in which the spontaneity and excitement of live music has been replaced by “StageHolo” and “StageHoloLive” and self-drive cars are killing the romance of the road. Luce, the only female in a struggling rock band, narrates a moving and involving character-driven story of the temptations of conformity.

Indrapramit Das also has the relationship between two women at the centre of his short story “The Muses of Shuyedan-18,” set on a colony world far from Earth. The strength of this story lies in the way Das is able to conjure up a completely alien world and how it has a huge impact on a love affair between a “non-het couple.” Particularly impressive are the strange life forms called “landcastles,” which are worth the price of entry alone.