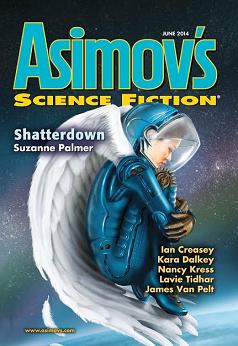 “Shatterdown” by Suzanne Palmer
“The Philosopher Duck” by Kara Dalkey
“Ormonde and Chase” by Ian Creasey
“There Was No Sound of Thunder” by David Erik Nelson
“The Finges Clearing” by Sylvain Jouty (translated by Edward Gauvin)
“The Turkey Raptor” by James Van Pelt
“Sidewalk at 12:00 P.M.” by Nancy Kress
“Murder in the Cathedral” by Lavie Tidhar

June’s Asimov’s starts out with Suzanne Palmer‘s “Shatterdown,” set on the world of Pahlati, home to creatures who, like oysters making pearls, create delicate jewels that are prized for their beauty. Cjoi has returned there, having grown up being exploited as the equivalent of a pearl diver. Harvesting the jewels is forbidden, but Cjoi has some unfinished business and it’s hard to protect when something valuable can be mined. Cjoi is an appealing victim who discovers that all is not what it should be, and who works to make peace with her past.

The title may sound silly, but “The Philosopher Duck” is a serious story of survival. Ravi is a Bangladeshi who lives by the rising Indian Ocean. When a massive storm approaches, her family takes refuge in a “rescue sphere” where they hope to ride out the storm, when the duck accidentally joins them. Kara Dalkey‘s story has little real conflict and reads like a fairy tale, but the characters are vivid and the result very satisfying.

Ian Creasey contributes “Ormonde and Chase,” a husband-and-wife team that sells pomonics – plants designed to grow into sculptures and instant topiary. Harriet Ormonde is the genius at making the flowers, and is asked by Dean Hudson, one of the Austerity Rebels against the government to create flowers that look like important politicians, but which also disgust those that see them. Chase, the businessman, doesn’t like it, but Ormonde takes it on. The concept is an excellent one and the details of the trade of pomonics are great reading, and I liked the way she handled the ending, showing, perhaps, a different solution to political strife.

Time travel raises its head in “There Was No Sound of Thunder” by David Erik Nelson. Suze is part of a group of students who are joined by Taylor, who has a time travel portal – but a problem: changing the past isn’t quite working out, and may be making things far worse. I did like the characters and the way the changes had been integrated into the world of the story, but the story was just a bit too talky for my taste.

French author Sylvain Jouty contributes “The Finges Clearing” (translated by Edward Gauvin), a vignette about a small area in the forests around a small town with a unique history. The story is pure idea, with a bit of ironic commentary on how tourists behave.

“The Turkey Raptor” is a nice little tale of revenge and double cross. Leon has been forced to move to Decatur, a mountain town, where he is left alone most of the week while his mother works in the forest service. Bored and disenchanted and the victim of bullying, Leon has found a dangerous prehistoric predator, for which he has some deadly plans. James Van Pelt draws a picture of teen boredom and victimhood that’s very vivid, and ends it all with a powerful twist.

In “Sidewalk at 12:10,” an old woman in her 11th century is juxtaposed with the life of Sarah, who is living out the worst day of her life. It’s no surprise that the old woman is Sarah and she is spending much of her money to go back to the worst moment of that day. I find the point of Nancy Kress‘s story obscure and am left in the dark as to what the old version of Sarah was trying to accomplish.

It’s pure gonzo alternative history in Lavie Tidhar‘s “Murder at the Cathedral,” set in an alternative world where alien lizard queen Victoria rules 1888 England. Orphan has been recruited on a mission by the mysterious Bookman to travel to France to meet a contact in Paris. At the same time, La Convention du Monde du Roman Scientific is going on, and, meeting the author Herbert G. Wells, Orphan attends. The story is a wild one, with clockwork automatons, 19th century science fiction authors, and mix-up, murder, and dark plots. It seems to be part of a series, and the imagination shown here marks it for one to watch.