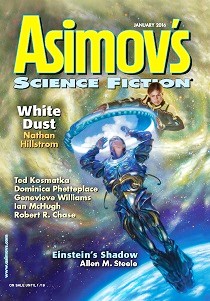 “The Baby Eaters” by Ian McHugh

Many of the stories in this month’s Asimov’s deal with (xeno)sociology and/or moral perspectives and are of a fairly science fictional nature, though one edges toward fantasy and one is set in a retro-multiverse. While it’s a fair issue overall, only “Chasing Ivory” really stood out.

“The Baby Eaters” by Ian McHugh

This short story is difficult to summarize as it has little plot and detailing the main pivot would spoil it. Basically, it is the familiar bio/sociological tale of a human trade agent on an alien world who suffers culture shock.

While I wouldn’t want a schematic alien culture depicted only sufficiently to convey the theme, it is arguable that this alien culture is a little more complicated than it has to be and, physiologically, the species is not entirely convincing, but I’m willing to let that go as it gave a density and interest to this tale that many similar stories lack. This also throws in linguistic gender politics in a way similar to Ann Leckie in that a big deal is made of it to little or no actual point, though at least it took an interesting approach due to the trader’s translation device. The pivot, which I won’t describe further than the title reveals, is a bit simple and obvious but also interesting and not too “pat.” All in all, high-grade magazine filler: probably not likely to be in a Year’s Best or win any awards, but a good read.

Adia has a helicopter drop her off in Canada as she goes “hunting” the wooly mammoth in this short story of bioengineering/cloning. Via her senses and reflections, we witness the giant beasts and reflect on them and elephants; extinction and resurrection.

My only quibble is that I’d have cut the last two and a half short paragraphs which don’t change the story functionally but, to me, overdo the “moment” and the sentiment, as I’d already felt a definite “gosh wow sensawunda” myself. But they aren’t destructive ruinous lines, anyway, and this is an excellent, concise, recommended story.

“Atheism and Flight” by Dominica Phetteplace

As the story opens with the protagonist watching a sort of guru leap across a canyon in either a display of spiritual power or con artistry, we learn he has survived a motorcycle accident and has lost his arm, as well as suffering back injuries. The novelette focuses on the protagonist trying to recover, feeling spiritual yearning and, eventually, seeming to start to regrow his missing limb, as well as other developments. The pivot comes down to his rational friend and his spiritual friend accompanying him on his own effort to make the leap.

I am a sucker for a nice bracing sarcastic cynical tone laced with gallows humor which is definitely something this story has, so that worked for me. I was also impressed with the author’s burst of prose poetry near the end as the protagonist’s universe flashed before His eyes, so to speak. However, many people may well be put off by the very tone I appreciated and may also be put off by what could be seen as New Age vacuity. The story definitely has a fantasy vibe with its gurus and psychic ladies and whatnot, despite references to “stem cells.”

Margery is a sort of spook who is using alien technology and a single soldier to transport a copy of that soldier somewhere out in space to construct a protected bridgehead in a high-radiation environment. However, the soldier-copy seems to be doing an increasingly poor job, doing less and less before he succumbs to radiation sickness, despite his original self seeming to be a loyal and bona-fide hero. This may result in other nations somehow ruining the project and Margery’s career. After getting angry with the soldier and sending him away, she realizes she might be able to find out what’s wrong by testing the alien tech herself. She interrogates her copy in the radiation zone but things don’t go as she expects.

If the summary doesn’t seem to make a whole lot of sense, that’s okay: neither does the story. It seems to want to be a Rogue Moon or “Think Like a Dinosaur” sort of psychologically “deep” story and seems to be striving for a “Scanners Live in Vain” sort of cognitive dissonance but doesn’t really succeed at any of it. For instance, there’s an initial description of color blobs which seems to be there solely for the cheap effect of disorientation. And there are too many perplexing issues and errors. It is stressed that she’s alone but the infodump that explains why is too long and too late. It could have been shortened and either delivered prior to her solitariness being stressed or that stress could have been delayed. The parameters of success and failure in the nation-state struggle are not explicated. (It seems to be some sort of “land rush in space” between the nations.) The whole nature of what Margery is trying to accomplish at the “remote” site is too vague. Neither of these things seem to be thematically important but only there to provide plot tension. The “white dust” of the title derives from the fact that the alien tech won’t allow “two copies” to exist in the same place, so reduces to dust any already-present copies into the eponymous substance, but there seems to be some kind of ontological failure regarding what constitutes a “local duplicate.” Is a dead hunk of irradiated protoplasm really a “duplicate” of a fresh, functioning copy? What would the contents of a cremation urn be? How is the “white dust” not still a local duplicate then? Etc. The climactic sequence is cleverly done in a logistical sense, but depends on illogic from Margery. There seems to be a severe problem in that the solution of what the problem is seems to rely on the duplicate soldier having a certain state of consciousness he’s explicitly said not to have. And so on. Perhaps this is a perfect and brilliant construction (the editor seems to think along those lines as this is the cover story) and I am guilty of misreading, but this just seems to be an ambitious but muddled mess.

Constanza Hernandez is a pilot in a near-future modification of the war on terror. She’s given a cryptic series of missions which involve simply transporting a soldier into various regions near or in enemy territory. Perplexed by this, she begins putting together snippets from the filtered newsfeeds and realizes she is involved in something which disturbs her.

Whether readers agree or disagree with the protagonist’s ultimate attitudes and actions will likely strongly condition their responses to this story which, as near as I can tell (trying to filter out my own extra-aesthetic reaction), is a competent and interesting but rather simple story. (In a small quibble, it also reveals a detail late in the story which would have been obvious to the protagonist from the start, just to have a “surprise” for the reader.)

“The Singing Bowl” by Genevieve Williams

An ethnomusicologist is on an alien planet trying to understand the alien “gis” and their singing in “the singing bowl.” All she knows is that the aliens really don’t like to have their singing disturbed so, naturally, she accidentally (or stupidly and carelessly, your pick) interrupts them.

This, another xenosociology story, is the shortest in the issue and it’s too long. The gis are really inscrutable. We really don’t know anything about them. They’re very perplexing. And so on, for the bulk of the story.

It’s 1933 and an American private eye finds himself in England on business when a Scotland Yard inspector shows up and recruits him to be Albert Einstein’s bodyguard as Einstein makes his way from there to the U.S. aboard the “Dornier-Luftwaffe RF-01“—the Valkyrie—an alternate universe version of the Bel Geddes “Airliner Number 4”. In this universe, the Nazis have taken control of Germany and WWII will occur, but Hitler has been replaced by Gregor Strasser. This is a sideline to the main task of protecting Einstein from the Gestapo and assassins and whatever else might prevent him from defecting to the U.S.

Alternate history buffs may enjoy this novella’s alternate history and fans of noir may enjoy the private eye angles and I enjoyed the transatlantic airliner which recalls ‘30s super science tales which reflected real planes of the time like the Dornier Do X. That said, as fiction, it’s a bit lacking in the plotting department, depending on a single unsurprising peak sequence and having some authorial conveniences throughout; thematically, it’s not overly stimulating; and, science fictionally, it’s just another multiverse story, though it does throw in a detail that may be fairly original or at least not overused. Still, well-researched, conveyed in clean prose, and interesting while it runs its course.

Jason McGregor‘s space on the internet can be found here.