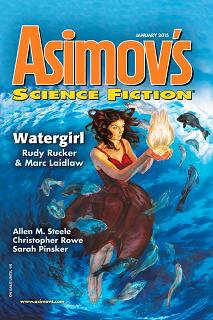 “The Long Wait” by Allen M. Steele
“Watergirl” by Marc Laidlaw and Rudy Rucker
“The Unveiling” by Christopher Rowe
“Ninety-Five Percent Safe” by Caroline M. Yoachim
“Candy From Strangers” by Jay O’Connell
“Butterflies” by Peter Wood
“Songs in the Key of You” by Sarah Pinsker

“The Long Wait” by Allen M. Steele is the story of Danishta and her family’s vigil over several generations as they monitor and support a spacecraft traveling to other stars. It departs when she is only a baby and it will arrive when she is an old woman. We learn of the major events in her life, the good and the bad, as she grows up. The parallels of the spaceship’s long and relatively uneventful journey against Danishta’s eventful life and the links between the spacecraft and the dangers to Earth provide a nice contrast. Since reading this story I have discovered that it is the third episode in a series, preceded respectively by “The Legion of Time” from the July issue, and “The Prodigal Son” in the Oct./Nov. issue. While the stories hold up nicely on their own, I recommend getting hold of these issues of Asimov’s in order to appreciate their cumulative effect. They are all entertaining, with two more slated to appear in 2015.

“Watergirl” by Marc Laidlaw and Rudy Rucker is about two surfers, Delbert and Zep, who ride the waves on hi-tech surfboards and live the good life of beach bums in Hawaii. A property developer is planning to displace the poor people living in slums in order to build homes for billionaires and he uses a super hi-tech wand to essentially give conscious life to waves. The description of this process relies on the tired and overused word quantum along with plenty of invented jargon to create some fairly weak technical blather. It’s a big stretch to accept the jump to conscious waves but it is essential to the story. A girl, Lokelani, is killed in a giant wave and, because she merges with the conscious waves, becomes the water girl of the title. The story is okay if you can accept the pseudo science; the plot is decent but too much of this tale is spent in the patois between Del and Zep. As a result, it sags in the middle. It’s not one of the best stories in this issue.

“The Unveiling” by Christopher Rowe presents the tough life of a clean up work crew on a planet made filthy by volcanic ash. They are at the bottom of the social hierarchy, exploited and abused by the rich bosses. Tayne is their leader and is clever, cynical and adaptable. But he and his crew are caught up in the struggle between the classes, with dire consequences. The world and the environment are deftly written so that you soon feel a part of the struggle, and the ending has a nice twist. It’s a good story.

“Ninety-Five Percent Safe” by Caroline M. Yoachim shows the consequences of risky travel. When travelling through a wormhole from the overcrowded and dystopian Earth to a new colony there’s a 5 percent chance that you will disappear forever. Life on Earth is dreadful, with families moved at random into ever smaller accommodations, so the pressure to travel is even greater than the risk. A young girl, Nicole, wants the new life and is ready to take that risk but her mother does not. The tensions between the generations as well as the risks and rewards are well told in an interesting story, with some nice side views of life connected to the internet.

“Candy From Strangers” by Jay O’Connell is a study of suicide. Morgan is a man with super tech prosthetic legs but they’re still not as good as the real thing. He looks for people who are about to commit suicide by jumping in front of trains (or by similar public means) and “treats” them by giving them a poisoned candy pill so they will have the option of a painless death. Sometimes they choose to live and sometimes they end their lives. He meets Ariel and saves her from jumping in front of a train by offering her the poison candy which she keeps while she decides whether or not to die. She stays in contact with Morgan with complex outcomes for both of them. The story is an in-depth examination of why people want to kill themselves, and what they feel. It is moving and captivating and is very highly recommended.

“Butterflies” by Peter Wood references the radiation monsters of the 50s and 60s science fiction movies right from the start, where the narrator, a biologist, finds a massive butterfly the size of a Volkswagen beetle in his garden. The characters don’t find this butterfly particularly remarkable but then another giant insect seems to surprise them and they finally decide to try to find out what is causing these monsters to appear. The radiation monster films from the 50s always carried a message about the dangers of tinkering with life and had at least one scientist who was mad, evil or had lost control of his experiment. It was also essential that the monstrous animal or insect would destroy much of the city or town. In this story the reaction of the narrator is mild, the consequences of the monstrous bugs almost inconsequential and the scientist is only slightly shifty, so most of the key (and fun) features of this sub-genre are neglected and the link to the movies is lost. As a result the story becomes too weak to be a parody—or in strict adherence with the clichés of the sub-genre. At the same time the storyline is equally weak with no development of the characters or the situation. The end result is easily forgettable.

“Songs in the Key of You” by Sarah Pinsker tells the story of a poor girl, Aisha, who is bullied at school because she can’t afford the latest gadget – a device to play your own theme song when you enter a room. And, as always, the rich kids pay people to write the best songs. Aisha has musical talent and can compose her own music but she can’t afford the gadget and so hums it to herself. The rich kids hear her humming, denigrate her music and generally bully her. This is the usual rags to riches story but based strongly around clichés. It’s entertaining for a few minutes but easily forgotten.