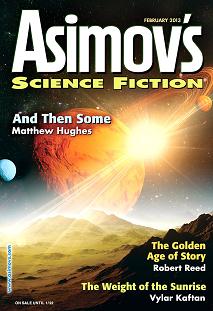 “The Weight of the Sunrise” by Vylar Kaftan

“And Then Some” by Matthew Hughes
“The New Guys Always Work Overtime” by David Erik Nelson
“Outbound from Put-in-Bay” by M. Bennardo
“The Golden Age of Story” by Robert Reed
“Best of All Possible Worlds” by John Chu

What I’ve read of Asimov’s has been consistently strong, and this issue is no exception.

“The Weight of the Sunrise” by Vylar Kaftan is the single novella of this issue, and it takes place within an alternate history of the Incan empire. The year is 1806, and Pizarro never defeated the Incans; the empire has flourished despite the continued existence of smallpox, as quarantines have modulated the spread of the disease. An Incan named Lanchi, whose surviving of smallpox has elevated him to nobility, is telling his grandson the story of his heritage.

Lanchi’s story begins when he is summoned to translate for the Incan ruler-gods; Americans have arrived to trade the smallpox vaccine for gold to fight their war against the British. Lanchi meets the American leader, Loddington, and particularly befriends Loddington’s darker-skinned half-brother and slave, Marco. Lanchi’s quandary, as the negotiations go on, is that a successful transaction will mean a great sacrifice of many children to the gods, to appease them for giving away so much sacred gold. It is likely that his own daughter will number among the sacrifices. The barbarism isn’t only on the Incan end, though, as Lanchi also considers the treatment of slaves by the Americans, and he is torn as he tries to find the solution that will save the most lives.

This is a mesmerizing and beautifully told story. Why can’t real history be written like this? If it were, no one would have any trouble remembering it—not only events and geographical details, but also an immersion into situations that allow a reader to think about the conflicting motivations of various sides. The overall tone of the story is of pride and hope, and reading this alternate history of a destroyed civilization feels, to me, oddly healing to one troubling memory of our collective human race.

“And Then Some” by Matthew Hughes is a novelette that, like many of Hughes’ books, is set in a far-future space opera universe called the Ten Thousand Worlds. Erm Kaslo comes to the world of Cheddle with an arrest warrant for a man whose confidence scheme involving some mines has defrauded investors of millions. The police on Cheddle aren’t cooperative, and Kaslo ends up imprisoned and, coincidentally, working in a mine, digging and refining a strange rock. Kaslo is nothing if not resourceful, as he begins to plan both his escape and how he can fulfill his original mission.

This piece is skillfully told, with a lovely rhythm to the writing that makes it a pleasure to read and imagine. It definitely reads like a piece of something greater, rather than a self-contained story; I definitely got the impression of much more story expanding out and alongside this one. Erm Kaslo seems a bit more of a caricature than a three-dimensioned character, but he’s still one of those heroes you just love because you know he’ll make it out of every scrape with aplomb.

“The New Guys Always Work Overtime” by David Erik Nelson presents a unique solution to the problem of how to keep jobs in the country while minimizing labor costs. The “New Guys” are groups of people transported from the past through a time portal to work in the factory. Even with overtime pay, and wages that are competitive when converted to that person’s past-time currency (adjusted for inflation), it’s a winning proposition for the factories of the future.

Taylor at Human Resources of Just-in-Time Fabrication and Fulfillment narrates the story; he leads orientations, and to liven up the humdrum of an unexciting job he tells interesting lies about present-day society and politics to the New Guys, who range from cowboys and coal miners to gunsmiths and tin smiths. Then one day they get a group that appears to be people from a concentration camp in Auschwitz, and that’s when cracks in Taylor’s HR-smile-façade begin to show, and he questions what they’re doing.

This story got my attention from the start and just got better. It’s a hilarious time-travel story with great characters and lots of depth even amidst the fun.

“Outbound from Put-in-Bay” by M. Bennardo takes place in a future in which a New Ice Age has taken root, with dropping temperatures and water levels. The setting for the story is around the Republic of Erie, the Great Lakes Confederacy, and Canada; the narrator hunts caribou to survive, and during the wetter months, she works on a boat smuggling oil, an operation that profits by avoiding a 100% export tax.

The narrator is caught in an untenable position when the captain of her boat tries to steal the oil from a drop site meant for another smuggler, and they are shot at by her colleague and almost-friend Angela. The low water level traps both boats, and a race against time begins as the boats try to escape before someone gets shot or a vessel is destroyed. To pay for the losses from this episode, the narrator accepts even more dangerous work—the delivery of a mysterious small package into Canada, from which too many people don’t return.

This story was a little hard to get into at first, because so much world had to be built in a short time, but it is completely worth the effort. One-third of the way through, when the action starts, I could hardly read fast enough. The main character is a strong female, but nothing about her is unrealistic or two-dimensional. She is a marvelous protagonist who faces her choices with courage and intelligence. The world is dystopian, but not depressing; it’s just life and survival, like anytime and anyplace else. This is a tight story and an exciting, moving read.

“The Golden Age of Story” by Robert Reed is a piece about the nature of telling a story, weaving five interconnected vignettes together. It begins with a doctor who is selling an experimental drug cocktail called Lot-9, which creates increased IQ, although the way it comes out is through compulsive lying—the creation of seamlessly interconnected fictional stories out of a newfound fount of creative genius. In the next scene, a salesman who’s taking Lot-9 is telling lies in a bar; he’s become an amazing success and stolen all the clients of his competition. Then we see the slow infiltration of Lot-9 into other scenarios—the most popular boy in a summer camp who spellbinds with stories about his life, and then more and more children whose stories range from time travel to impregnation by sea serpents, and worse. The spread of Lot-9 becomes so epidemic that when a fellow travels to Africa and is kidnapped and ransomed, and he engineers a heroic escape, no one believes him. And this story about telling stories comes full circle with the last scene.

This piece is clever and thought-provoking, lending insight into Reed’s own process for creating a story. That layering of self-consciousness seems to be almost more important than the story and the characters themselves here—it makes me want to analyze the story structure and components rather than think about any of the actual events.

In “Best of All Possible Worlds” by John Chu, Irving is a grad student preparing to give a presentation to his advisor’s research group. His “friend” Declan, who isn’t human, comes to visit. Whenever Declan is around, Irving hears surround-sound versions of historically important musicals in his head, and today it’s Candide. A mysterious attack causes Declan to knock Irving down and send him to a dimension where he’s in the middle of a real-life version of Candide—complete with townsfolk and a gallows prepared to hang heretics. Irving has to find creative ways to maneuver through the musical and avoid the gallows.

A well-written, intelligent, subtle story. Probably better if you’re familiar with Candide (I confess I’m not). I never got what the attack was, and I was left with my curiosity unsatiated about Declan’s alien nature, but it doesn’t seem necessary to know these things to enjoy a smart, lighthearted read.