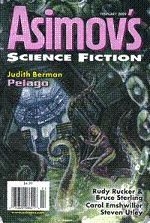 “The Bird Painter in Time of War” by Carol Emshwiller

“The Coldest War” by Matthew Johnson

“The Point” by Steven Utley

Asimov’s for February has a little bit for everyone, from a story that may or may not be in the SF/F genre to a long novella that falls into the best of today’s space opera tropes, and many types of stories in between.

The magazine opens with “Colliding Branes” by Rudy Rucker and Bruce Sterling who have collaborated before. They continue in their gonzo look at the most recent hypothesis about the universe – the Cyclic Universe scenario. The ‘gonzo’ in the previous sentence should tell you all you need to know about the story. It is a comedy about two bloggers who are together on the night that two ‘branes’ are set to collide with each other, destroying this universe and creating another. I found it more fun then past collaborations.

Carol Emshwiller’s “The Bird Painter in Time of War” is a completely different animal. This is not a science fiction story (unless it is a part of a larger work – but this story itself could take place in any war at any time) and it is only fantasy if you take the last line literally. What the author has written is a heartfelt story about the ability for life to continue within the cracks of war amidst the shooting, pain and destruction of two sides of soldiers attacking each other. Now, depending on how you read the last line will determine if you believe it belongs in Asimov’s at all. In one viewpoint the story becomes a hopeful (but still scary) fantasy. In another it becomes a metaphor for annihilation. Personally I find it interesting that this story is much more poignant and memorable as a non-genre story. So, therefore I read it as non-genre. The writing is elegant as I have come to expect from Ms. Emshwiller and the characters are quickly delineated with powerful emotional lives. It is an excellent story – but genre? In any case, I’m glad I read it – it made me feel for those caught up in war without really understanding it. It was thought-provoking and emotional at the same time.

If you want to have a real sense of place but hate feeling cold then “The Coldest War” by Matthew Johnson is something you should probably skip. I read it on a hot Californian afternoon and still I shivered. The story takes place either in the future or a subtly altered history of our world. Canadians are holding Hans Island against the Danish who wish to control it themselves. The island is situated between Greenland and Ellesmere Island and whoever controls it controls a strait “that had opened up in recent years”. It tells of a perilous journey out into the cold by one of the two Canadian soldiers living there in order to control it for Canada. Unfortunately, the story is not up to par with the beautifully realized setting. I am definitely looking forward to more by this writer when his obvious facility with setting can converge with plot and characters of the same power.

The next short story has an interesting idea and setting – a Martian low gravity retreat center on an earth that is facing major prejudice problems between two strands of humanity – those born by the age-old method and those who come out of vats. “The Certainty Principle” by Colin P. Davies is oversimplified and a bit predictable, but it is a society that needs more fleshing out and a longer treatment to deal with the topics it tries to tackle.

“The Point” by Steven Utley is a very short story that would wear out its welcome at a longer length. It concerns the point of conflict between two paleontologists and magnifies it for satiric effect.

The novella in this issue is superior – another gem by Judith Berman. In the editor’s introduction it is related that this novella is part of a longer work still in progress. That concerned me. I find that sometimes outtakes are just that – outtakes – unable to stand alone without a satisfactory conclusion or without enough information to explain what is happening, but “Pelago” is not one of those. It is a full-fledged space opera in the new style; stylishly written, with a baroque milieu and a wonderful central character. It also takes thought to read this story. I like that, when an author does not treat the reader as a child, but expects you to do a little work for yourself. The social setting is complicated and fascinating with at least three types of overlapping streams of language. This can make it thick going at times, but perseverance soon renders it all understandable. These various layers of speech are complex and well thought through.

The story concerns a new “deck hand”, named Ari, whose family has been destroyed by the very mercenary that is now her captain. How she got to be there and what happens as she tries to escape is the basis of the story. “Pelago” turns out to be an artifact of the elder race which Ari and various members of the mercenaries find themselves trying to penetrate in order to find a missing ‘repairman’ demanded by the mercenary’s boss. It is a rollicking good read with thoughtful touches and excitement galore. I look forward to the novel. Keep going, Ms. Berman.

This novella makes the issue very worthwhile – and the Emshwiller will make you consider your belief about what is SF or not if nothing else.