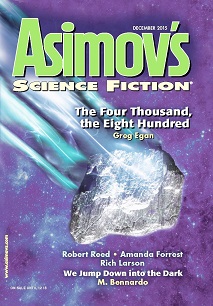 “Bidding War” by Rich Larson
“Come-From-Aways” by Julian Mortimer Smith
“Empty” by Robert Reed
“Of Apricots and Dying” by Amanda Forest
“Riding the Waves of Leviathan” by Garrett Ashby
“We Jump Down into the Dark” by M. Bennardo
“The Four Thousand, the Eight Hundred” by Greg Egan

Rich Larson comes up with quite a humorous short story in “Bidding War.” It takes place just the day after tomorrow and continues some current trends to their logical next steps. Wyatt is in a bidding war on a future e-bay. He wants to buy a replica Mesoamerican artifact to impress the woman who just dumped him. As we follow Wyatt on his bidding frenzy, the story comments on clueless males, and the future of e-bay, uber-style rides and especially entertainment. It is fast, fun and probably sadly close to what our lives as everyday citizens will truly be like in a very short time.

Julian Mortimer Smith is a name new to me but I hope I hear more from him in the future. “Come-From-Aways” takes place on a beach–somewhere in New England—which seems to be a repository of space trash. This is alien wreckage from space brought to this beach each time the fog rolls in. Using this SF idea the story becomes one about opening our horizons to go somewhere new and take a chance. It is a story about a young man who has gotten his girlfriend pregnant and what he experiences when in his confusion and depression, he is uplifted into the fog. The story is simple and nuanced. Very good stuff.

“Empty” is one of the two real gems in this issue. Robert Reed has written an excellent novelette which should stand out as one of the best of the year. Our narrator is a data machine. He claims that the “cleansing” that recently took place could have been much worse by the fact of simple incompetence. We then realize that this situation took place many years ago and only “two worlds were sterilized with billions killed.” What we learn is that this was a war of machine intelligence against machine intelligence. In the aftermath of the cleansing, a ship is designed to take all machines types–data, ab-gaps, etc. to a safe hideaway on another planet in a different system. The story starts out on a huge canvas and continues to surprise right through to the end. But, Reed is never just an action or big vista writer. He discusses the fundamental rights of every soul and who or what can or should survive. Big ideas on a big canvas in a novelette. This is some masterful writing.

But the good stories this month continue with another author who is new to me. Her name is Amanda Forest and with “Of Apricots and Dying” she has written an elegiac tale set in the near future in a volatile part of our world that does not receive enough attention in SF–India/Pakistan/Kashmir. This is a family story of heartbreak and secrets told with just enough élan to keep it from sentimentality. The protagonist is a young girl named Asma who has no hope of being married and therefore in this Islamic country not much hope for a future. But the country has discovered lithium fields nearby and both China and India want to take them over. The family make-up is complex and the choices are cleanly delineated. The cast, of only six people, is well described so that the choices put in front of each one become very real to the reader. Wonderful work.

The next two stories are not as fine as the others, but others may disagree. “Riding the Waves of Leviathan” by Garrett Ashby does not really need the SF conceit used to tell the story. For some reason we are given a huge leviathan—Alien? Prehistoric? It is never explained—has occupied the beach of town somewhere in America. A boy faces the death of his best friend caused by the leviathan. In so doing he faces Death and his own guilt. The leviathan becomes just a metaphor and could have easily been just a surfing accident.

In “We Jump Down into the Dark” a space station that was created as a habitat for gorillas has a breakdown and the crew and gorillas must be saved before it tears itself apart. M. Bennardo has written a pretty standard and forgettable story, I am afraid.

However the novella of the issue is another gem of a story. Greg Egan wrote quite a number of the best short fiction in the 80s and 90s but has been fairly quiet in the short fiction field until the last few years. “The Four Thousand, the Eight Hundred” is another work that should cement his reputation as a fine practitioner of the short form. The asteroids have been colonized. Vesta is colonized on the basis of the people who contributed to the founding becoming the founding fathers and everyone receiving an equal share. Ceres is based on each person getting exactly the same amount no matter who they were or where they come from. The Vestan government, due to political maneuverings, has voted to get reparations from one of those founding clans about 100 years after the fact. The clan being made into second class citizens and others who believe the ruling to be false become rebellious. Ceres on the other hand has accepted refugees from Vesta whenever they can. In a bravura opening chapter, Egan shows us how the people get away from Vesta by strapping themselves into cocoons and attaching themselves on the outside of cargo being sent to Ceres. The refugees spend three years in a type of suspended animation while traveling through asteroidal space. The story is told from two viewpoints. Camille becomes a protestor on Vesta. The other is Anna, the director of Ceres. It is a tense political situation with both worlds plainly pictured through the eyes of these women. My only caveat is that Anna has a partner but the third member of their threesome is absent. This aspect is followed for a short while but then no more is said about it. That is why I think this may be an edited piece of a larger work. I hope so, because I want to return to this milieu. Either way, I wish it had been a bit more cleverly edited to eliminate this dangling thread.

This is really an excellent issue of this magazine. Read it. You will be glad you did.