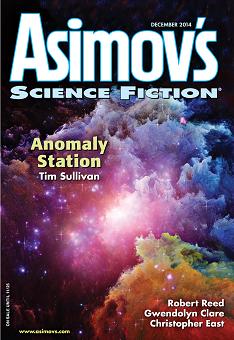 The December issue of Asimov’s contains 1 novella, 2 novelettes, and 4 short stories, each dealing with some kind of loss. That loss is often a death, but there is also a feeling of bittersweet nostalgia running through the issue.

“The Cryptic Age” by Robert Reed felt somewhat out of place in the issue. Miocene tells the story of her name’s origin to an entity comprised of three separate artificial intelligences. When she finds one of the three clever enough to suit her purposes, she rips them apart, forces that one to work for her, and sends the other two packing. The writing in the story is solid, but I didn’t find it very engaging. It would probably be better received by readers who are already familiar with Reed’s Great Ship setting.

“Graduation” by Andrew Miller opens with Claire listening to her funeral from her coffin. When it is over, she goes for dinner. The next day, with the help of some strange technology, she voluntarily leaves her body and transcends to a new consciousness so that she can help stop global warming. The idea at the core of the story is interesting, but it ends up feeling too easy—Claire’s doubts about death were unfounded, and her new existence seems fantastic.

The Kids in “Kids These Days” by Vernon Hedrick have been wired with an internet connection that interacts with their young brains and allows them to transcend together to superior humans. They’re solving the world’s problems and living happy, connected lives. But the main character is too old to join them, and he and everyone else above a certain age are left to muddle through life’s hardships. On top of the fact that his generation has become irrelevant, his father is dying, his wife has left him, and he’s not happy with any part of himself or his life. The core concept is familiar, but the execution is wrenching and relatable. This one is going to stick with me for a while.

In “It Gets Bigger” by Gwendolyn Clare, Lori and her lab partner Brian are tasked with identifying an object that was found and brought back from Mars. At first, it is tiny an inert, but when they try an invasive test, radiation floods their lab. Lori miscarries her very early term pregnancy, and her husband still leaves town for work. The next day, Lori and Brian find that the object is growing. It continues to grow and also starts changing shape. They aren’t able to discover why, and the object is eventually launched back into space, where it hangs in the heavens like a second moon. This is a lovely, understated story about unanswerable questions, love, and loss.

In “Videoville” by Christopher East, Tim and Louie are surprised when Nolan, one of the most popular guys in their high school, asks them to come hang out and catch a movie with him. As the night goes on, he confesses to Tim that he’s actually a version of himself from the future, and he asks for Tim’s help. When the time comes, Tim keeps Nolan’s sister from going for a ride with a drunk driver, and saves the lives of everyone who would have been in the car. But no one else remembers the night the same way Tim does, and Nolan is back to normal when school starts up again. The setting details in the piece are great, but the story itself was a bit predictable.

“Summer Home” by Sue Burke is a lovely and concise piece that answers all the questions that it needs to, but leaves enough mystery to keep you guessing. Some time ago, the main character witnessed a mysterious plane crash, and he lost his lover when the plane started freezing everything around it. He wasn’t surprised when government forces arrived, or when a small nuclear detonation made the area unsafe for human occupation. But now he can go back for thirty minutes and reclaim up to 20 pounds of items left in the summer home that he shared with his wife, and even though he knows exactly what items he needs to grab, he’s still having trouble moving on.

In “Anomaly Station” by Tim Sullivan, Tamara is getting ready to take a temporary leave from her duties on the station. Her temporary replacement, Lucien, arrives and links with the station’s Mind. Tamara disconnects and gets ready to leave, but the ship that was intended to take her away is destroyed before she can board it. She suspects foul play, especially when Lucien refuses to allow her to reconnect with the station’s Mind. Tamara misses the contact, especially since the Mind was once her lover, Hala, and Tamara volunteered for the assignment on the remote station so that the two of them could be together.

The station pulled away from the anomaly that it collected power from after the accident, and Tamara and Lucien are trapped together on the station, waiting for rescue. When rescue does come, Lucien is taken away, and Tamara is left behind to live the rest of her life on the station, then physically connect her brain with Hala’s when her body fails. But as the station is pushed back to its rightful place, Tamara realizes that Hala’s voice was not from the station’s Mind, but from her own imagination, and she somehow pilots the station into another universe.

Tamara is likable enough, but I didn’t find her interesting enough to carry the weight of the novella, and the twist at the end didn’t work for me.