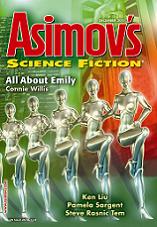 “All About Emily” by Connie Willis
“Surf by Suzanne Palmer
“Strawberry Birdies” by Pamela Sargent
“Ephemera” by Steve Rasnic Tem
“The List” by Tim McDaniel
“The Countable” by Ken Liu
“’Run,’ Bakri Says” by Ferret Steinmetz

This issue of Asimov’s is one of the strongest issues I’ve read this year. There are different kinds of gems by both established and new hands.

The novella this month is by Connie Willis. I am a Connie Willis fan and this one did not disappoint. The fact that it is a take-off on one of my favorite black and white films makes it even more of a delight. From the title she is riffing on the classic movie All About Eve. A movie about the cut-throat theater world, Willis takes us just a few years into the future with the perfection of robots and the marketing of such machines. You don’t expect cutting edge science with Willis or even overly science fictional concepts.  What you can expect is the SFnal idea to be integral to a story of emotional depth, with her trademark brand of humor. As one of her Christmas stories it does shine a light on the good side of humanity. Others may mock this side of our nature but I am enchanted with it. The theatrical and movie allusions do not have to be understood to enjoy this lovely story of a robot who just wants to be a Rockette.

Next is the high space novelette by Suzanne Palmer titled “Surf.” This is an excellent SF adventure story that places you right in the middle of the action without too much explanation. But it guides you smoothly through a space battle/intrigue scenario very cleanly. It’s cleverly plotted and moves along quickly, but then adventure is about action not explanation. This is a new writer to watch.

“Strawberry Birdies” by Pamela Sargent is written in precise, clear prose. The characters are nicely sketched but the novelette is too predictable for full enjoyment. It revolves around an unusual border in the home of a 1950s physicist. As told by Adele, the daughter of the physicist, we get a good slice of life of that time period. Unfortunately, the story about her “special needs” brother (probably autistic but, of course, unknown by that name at the time) and the unusual guest is conventional at best.

The final novelette is another thing, however. Written by Steve Rasnic Tem, it’s a highlight of the year. “Ephemera”  revolves around a future that has gone through a plague where the survivors live in fear of disease, and the world is as sterilized as it is possible to make it. The narrator  has a kind of friendship with a used book seller of the time. The book seller is a pariah and outcast because while the knowledge in his books is allowed (with much in the future internet), the very volumes are suspect because they existed before the plague. The story keeps us involved in the future world while talking to us today. What is truly ephemera and what are things that shouldn’t be forgotten? Powerful stuff.

“The List” by Tim McDaniel is a very short story with a good sting that distinguishes itself by that very sting. It is just brief enough to work and doesn’t outstay its welcome.

One writer I am appreciating a lot these days is Ken Liu. In his story “The Countable” he does not disappoint. There are top of the moment SF ideas here about mathematics, especially various types of infinities, and how our human brain processes time. What I like most about this author is that while explicating his wonderful SF ideas he never forgets the personal side. While being interested by his ideas I am also emotionally involved with his characters. He is clearly one of the best of our newer authors (though he has been selling professionally for some years now). I look forward eagerly to more of his work.

The story by Ferrett Steinmetz is also exciting. “’Run,’ Bakri Said” could not have been written before computers and computer games. It is another adventure tale, but set in virtual space rather than outer space. It concerns a future where video games are real. How would we feel to be just a player in a game? Another SF yarn that is exciting and propulsive.

This is an issue that has something for most all tastes. I recommend it highly.