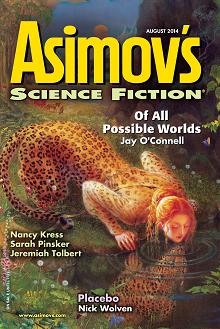 “Of All Possible Worlds” by Jay O’Connell
“Placebo” by Nick Wolven
“Writer’s Block” by Nancy Kress (reprint, not reviewed)
“Mountain Screamers” by Doug C. Souza
“Wet Fur” by Jeremiah Tolbert
“The Low Hum of Her” by Sarah Pinsker

First, let me say that I have the utmost respect for editors and proofreaders, but I also don’t sit in awe of them either. Good thing, because like the rest of us humans (another assumption) they make mistakes. The last two months I’ve noticed a few in Asimov’s that I found to be particularly glaring, and I reluctantly point them out now because each threw me out of the story. From “site” instead of “sight” to the particularly egregious “ATM machine,” all are easy to find for the average reader, and should never find their way into publication.

Now… back to our regularly scheduled program…

Jay O’Connell’s novella, “Of All Possible Worlds,” covers a lot of ground, selecting ingredients from several genres and mixing them in a perfect recipe of alternate worlds. Several times I was sure of the eventual outcome, only to find myself at square one again with no clue as to the possible resolution. To me, that’s the sign of a ripping good yarn. What would you do if every stupid pet theory or hoax invention turned out to be true? Constantine Regas finds out, but might wish he hadn’t. It’s easy to miss your whole life while you’re busy saving the world.

“Placebo” is Nick Wolven’s near-future novelette that is entirely plausible from many angles. The titular pet is a genetically engineered cybernetic small animal designed to love and be loved. These are elements that remind me of the movie A.I., but it is the concept of planned obsolescence that makes it realistic in a way the movie was not. Like modern automakers, it is not the initial sale, but the upgrades, constant maintenance, and scheduled replacements where the real money is made. There is more here, however, than meets the eye, and it is in the naming of the pet where the story holds its meaning for me. A placebo, after all, is a fake treatment that has real healing effects, while “Placebo” the pet is a “fake” creature needing love and attention that heals our protagonist in a way that the needs of his real charges could not. There is depth to this story beyond this, of course, and I recommend this one highly.

The novelette, “Mountain Screamers” by Doug C. Souza, is a typical coming-of- age story with an added (though unnecessary) dimension of criminal activity. Leave for a moment the problems with the introduction of Earth animals into an alien environment, and all the concomitant problems that entails, every one of the characters in this story follows the outline of well-worn tropes found in these types of stories. There is the “knowledgeable ancient,” the “brash youth,” and the “criminal element.” As usual, it is the “knowledgeable ancient” and “brash youth” against the world. Don’t get me wrong, there is some very nice writing, and it is a good read, but don’t expect anything new here.

It isn’t often that a story moves me to tears, but I’m a dog lover, and Jeremiah Tolbert’s “Wet Fur” hits the right notes. I was three pages into this story before I understood what was going on, but it was worth the wait. This is a sentimental tale that speaks to the sense of loss all pet owners feel at the passing of their friends. I was expecting an entirely different ending, but it was satisfying nonetheless.

“The Low Hum of Her” by Sarah Pinsker is a nice steampunkish-flavored, soft SF story about love, loss, and acceptance. Its core resemblance to Ray Bradbury’s “I Sing the Body Electric” is inescapable, however. The lyrical nature of the narrative in this version is quite good, though, and makes this a good read regardless of any comparative analysis.