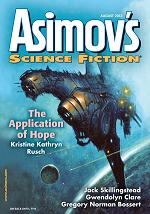 “The Application of Hope” by Kristine Kathryn Rusch
“Stone to Stone, Blood to Blood” by Gwendolyn Clare
“Arlington” by Jack Skillingstead
“Lost Wax” by Gregory Norman Bossert
“The Ex-Corporal” by Leah Thomas

“The Application of Hope,” by Kristine Kathryn Rusch, is an SF novella about Fleet Captain Tory Sabin’s single-minded quest to find her father who disappeared 20 years ago when she was only 13. Ever since, she’s driven herself to excel, to achieve Captaincy and to somehow continue the search for her father’s ship lost in foldspace, a twisty, dangerous form of FTL. The setting for this story begins with the loss of the Ivoire, a Fleet ship that jumped away from hostiles during preparations for a diplomatic mission. Unfortunately, the story quickly dives into various background tangents and flashbacks that, while useful to understanding Sabin, destroy any sense of tension. When the Fleet decides to conduct a foldspace search for the Ivoire, they task Sabin since she has the most expertise and has a ship close enough to do this. The search succeeds, but not in the way Sabin had expected, giving her answers for which she is unprepared. Ultimately, it all transforms her understanding of herself, and her purpose.

I had a lot of problems with this story. First, the pace is slow and the space setting confusing. Sabin’s insistence on using 2D screens seems horribly antiquated for a space-faring Fleet-based civilization. I was confused on how they traveled interstellar distances. The problematic anacapa foldspace drive appears to be their only form of FTL, which troubles me since the Fleet has successfully thrived in space for thousands of years, and I don’t understand how they could accomplish that with such an unreliable FTL drive. Where is the Fleet versus where is the Ivoire? Supposedly both are in the “Ukhanda sector,” which I would take to be a region of various star systems, except Sabin chooses a non-FTL way to travel the “half-day” journey to where the Ivoire disappeared. Sub-light travel could only take them a fraction of a light-year in that time, not feasible to move to another star-system, unless the Fleet was in respite on a moon in the same star system where the planet Ukhanda was located, in which case why call it a “sector?” As you can see, the space-topography is quite confusing.

Other problems that bogged the story down for me: Sabin conducts her own investigation into the new alien spaceships that attacked the Ivoire by using a manual search! No AI? This makes as much sense as using 2D display screens. She has her bridge crew visually zoom in on the distressed Ivoire. Using what? Giant optical telescopes on her ship? That would only work if both ships were in the same star system. Some sort of remote monitoring satellites? This hand-waving tech threw me out of the story multiple times. And the behavior of some of the Fleet Captains was appalling. First, Captain Cooper of the Ivoire deigns to provide more than a cryptic message as his ship comes under attack and long before his ship vanishes. I would expect a good Captain to relay as much information as possible and not make everyone guess about what was happening. Second, captain Cho doesn’t hear about the ship summons after the Ivoire disappears because he’s distracted by a bachelor party. Argggh!

A definite NO. While Sabin’s unfolding self-discovery eventually proves intriguing, the poorly crafted science and the inexcusable behavior of senior officers who should know better destroyed the overall credibility of this story for me.

Gwendolyn Clare’s “Stone to Stone, Blood to Blood” is a captivating tale of two young men, Brothers through shared life and adversity, even though Feng had once been a gift to Duyi. Duyi is half-brother to the regent. As a member of the ruling family, he hosts symbionts which activate the Symrock that powers everything in this planetary civilization. Feng is from the miner-class, mind-wiped as a child then programmed by NeuroLogic implants to protect and serve his master, Duyi. Now Duyi seeks escape from his half-sister who wants to force him to accept NeuroLogic implants to ensure his obedience to her. Feng arranges surreptitious meetings with the Freeminers who see Duyi’s symbiont skills as invaluable aids in their fight for freedom from the regent’s rule. They escape, and Feng is relieved that he can force his programmed Imperative to focus on keeping his Brother happy more than “protecting” him from the alleged danger of being out on his own. But escape is illusory, and both men must pay a high price for their decisions, a price that leads Feng to a sorrow-filled freedom he could never have imagined. Compelling characters in a unique world. A definite read.

“Arlington,” by Jack Skillingstead, follows Paul Birmingham, journeyman pilot, as he gets trapped in a strange fog near Mount Olympus then gets spit out into a world devoid of people, except for those who had been trapped here before and the beetle-like robots that hunted them. As he tries to avoid capture, he befriends another lost pilot, Maggie Farmer, who got pulled into this world from 1926 as opposed to the 1982 he’d left behind. He does escape, back through the same strange cloud, but ends up in a different reality. For 30 years he descends into isolation as his body is increasingly wracked with pain. Then Maggie finds him at an Arlington air show and tries to rescue him, explaining that his pain is this alternate universe trying to delete him. But he doesn’t have the courage to let go. When he does, Maggie finds him again, and he discovers new purpose for his life. Nice tension, intriguing characters and some innovative ideas on alternate realities. A definite read.

In Gregory Norman Bossert’s “Lost Wax,” Leena is an artist with bio-engineering skills, whose feelings for fellow artist Nadin are not reciprocal. The city where she lives is rife with barely controlled tensions between the poor, the rich, the militia and their allies the Chemists who make the feared golethe, yeast culture bred monstrosities that act as independent police, judge and jury to control the populace. Leena crafts messenger Augur Birds using wax molds, metal casting and yeast drivers. Similar birds are used by growing insurgencies eager to throw off the yoke of the ruling class. But Leena has a greater drive, to bring justice to all her people, that will require her to use all her skills and sacrifice everything she has to grow a golem. The story is rich in character and cultural detail but so bio-engineering information dense, that it was a bit of a struggle to read.

“The Ex-Corporal,” by Leah Thomas, is a heart-wrenching tale about Gwyn and her younger brother as they struggle with the reality of their epileptic father. Except their father believes he forays in the multiverse and a different person occupies his body after every seizure takes him away. The ex-Corporal is one of those persons who decides it’s far better to take over Gyn’s Dad then to remain fighting in a meaningless war on a world of carnivorous plant-filled jungles. He’s a brutal man who kills their kitten and doesn’t care what he does to their Dad’s body. Gwyn sends her brother to her grandmother’s to keep him safe and watches in horror as her Dad’s body wastes away from jungle rot and gangrene. Her only option is to find a way to trigger another epileptic fit in her father and hope that it allows him to finally return. A harsh story honoring the many unsung heroes who try and care for their aging, failing parents while torn between a sense of obligation and helplessly watching them fade away.