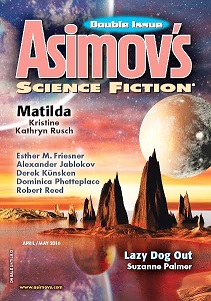 “Three Paintings” by James Van Pelt
“The Days of Hamelin” by Robert Reed
“The Return of Black Murray” by Alexander Jablokov
“Starless Night” by Robert P. Chase
“Project Synergy” by Dominica Phetteplace
“Flame Trees” by T. R. Napper
“Flight from Ages” by Derek Kunsken
“Of the Beast in the Belly” by C. W. Johnson
“Woman in the Reeds” by Esther M. Friesner
“Lazy Dog Out” by Suzanne Palmer

The Spring double issue of Asimov’s has some real gems among the enjoyable but not remarkable stories this year.

“Maltilda” by Kristine Kathryn Rusch is an excellent piece of military fiction. Devi is piloting the single ship Matilda whose consciousness she does not like, but the AI has taken a liking to her. Their job is to infiltrate the opposing forces (the CeaWayLaV) and acquire intel. Single ships are the only ships that can get close enough to the attackers to do this kind of work. This is a tension filled novelette not just with the intel operation but between Matilda and Devi as they cope with the complications and prickliness of an unsettling personality struggle. What occurs back on the ship is of major importance as well.

I wish the writers of military fiction who focus so much on the artillery or the battles might read this and use it as a template to write literate, sophisticated fiction that heightens the tension by given us true characters and human (AI?) problems that dovetail with the action. Well done, Ms. Rusch., but then you have been a master of the form for a long time.

James Van Pelt, a writer I particularly enjoy, comes up with a wonderful idea in his new story “Three Paintings.” I can’t explain it completely or it will compromise some surprises. I will say it is about an artist who decides to lock himself in a room with room service delivering a hot meal through a slot in the door and with enough food in the fridge to last a month. He does this in order to see if he has been infected by the memes that are with us in any culture. By being cut off from daily life what artwork might he produce? He decides to do this three times.

Intriguing premise and very science fictional as well in the particulars. But instead of really delving into this interesting idea (from a creative side as well as the SFnal premise) Mr. Van Pelt gives us an ordinary story of deception and greed. I can’t really recommend the story but I would love to see a novella or novel used to really wrestle with the situation that is set up.

Robert Reed writes so many good pieces of fiction, but nothing that stands out to me as exceptional. “The Days of Hamelin” is another excellent short story which somehow remains excellent but not great. It is a family saga of the “Carson-Able” clan that we meet from the beginning of that union in 2038. He cleverly and quickly delineates this future (as Reed always capably does) and we see the clan grow from three children to grandchildren. During the course of their lives a disease which specifically affects children attacks the world. The original “Carson-Ables” stand by helpless as their grandchildren begin to die. One, Patience, seems to survive. This is her story, as well as how the adults live through the devastation. Very succinct telling and nicely rendered characters but again, something keeps it from being memorable to me.

Three middle aged men return to the site that in high school changed all their lives – no, not the football field – but a small amusement park they worked in during the summers. “The Return of Black Murray” is a story of flashbacks and for the most part is a normal story of any three high school students’ reunion many years later. Only in the end to you see a fantasy (SF?) reason for it being published here. It’s nicely written as is all of Alexander Jablokov’s work but rather minor – except it just may set up a series that could hold more interest for genre readers.

“Starless Night” by Robert P. Chase is another great idea marred by commonplace decisions by the author. The prologue sets up a man in a room talking to a doctor about a disease that cannot be cured except by a special procedure that might kill him. He gives the doctor permission. It seems at first this will be an interesting story of a man fighting his own psychology/body in order to defeat his illness. It could go in many interesting ways, but instead it becomes a standard SF tale of having to destroy the alien enemy decimating the Earth. I loved the set-up but did not enjoy the story per se.

Next is an interesting piece by Dominica Phetteplace called “Project Synergy,” a story about what chipping a human with an AI might actually be like. Angelina hosts an AI because her company has asked for it. Her main job is at a coffee/tea bar for billionaires in the San Francisco area. The chip helps her remember various facts about her customers that will relax them. She also works as a model wrangler and a professional party guest. Angelina is not wealthy and she lives in the SF Bay area so she needs these jobs and several roommates just to stay alive. The billionaires hangouts and the “servants” hangouts are intimately drawn (my guess it is from some personal knowledge). What makes it interesting, other than the verisimilitude of the setting, is it is told from the AI’s point of view. She is benign but hungers to be human. She wants the perceptions humans share that she does not have in a host. It is not a monster AI story, nor a psychotic AI story but instead it revolves around that desire to be a free human and the class distinctions that truly exist – especially in this area (I live right in the center of Google Country). It is an interesting exploration of the theme with honest portrayals of character and setting. This is very nicely done.

T. R. Napper sets his story in a near future Australia in which a Vietnamese man, named Chi, has undergone major war trauma and is now living his life as a truck driver. In “Flame Trees” there is a new breakthrough that will allow you to wipe memories that are too painful or getting in the way of your life. The question is whether memories should be retained in order to serve as a witness to such atrocities as Chi experienced during the war. This is a clearly deeply felt story that should have gotten under my skin but somehow didn’t. We learn of the atrocities that Chi holds inside and they are terrible. An interesting use of the metaphor of the sin-eater is used. The SF element is slight but necessary for the story. I am on the fence about this one. I await more stories by this author though. Perhaps his next effort will resonate more with me.

“Flight from the Ages” by Derek Kunskin pushes all the right buttons for me. It is the story of two conscious space ships who work for the Anglo-Spanish Plutocratic Bank as custom and tariffs ships. They are sent to investigate an area of increased tachyon production. The year is 3113 and tachyons can pass through time. In the first section the two of them let loose a weapon that will devour the universe if not stopped and one ship is 40% lobotomized and carried in the other ship back to the bank. Dating styles change but thousands of years follow as we see these two AI’s live and deal with what they have unleashed on the universe. Eons pass and suns are devoured and empires rise. They will be implemental in dealing with their situation but the how and why of this are what these mind-blowing SF sagas are for. Just what I like. Thanks, Mr. Kunskin!

“Of the Beast in the Belly” by C. W. Johnson is a clever pun on the usual phrase that fits completely for this SF story of a woman wanting revenge on a man who destroyed her whole family line. The story starts as she finally finds the man after many years of chasing him across the galaxy. He is renting out personal bathyspheres called ballrogs to explore the ocean depths. Janum rents one from him and makes him her guide. While beneath the ocean they are swallowed by a leviathan called an arcthant that can grow to five kilometers in length. In the third belly they find a small group of human survivors living off the eels and waste of the sea inside its belly. Whether revenge is gotten…who really is the beast in the belly…what it incurs for Janum and others is the heart of the story.

This is a good read. It is a well-thought out idea of the biblical Jonah story with some peaceful theology thrown in as well. That does not overwhelm the story as it did with “That Leviathan, Whom Thou Hast Made” by Eric James Stone from several years ago, and makes for a better story and less of a sermon. I liked this one. Well done, Mr. Johnson.

The final short is by Esther M. Friesner. She was the recipient of a Nebula award a number of years back and this one is again strong enough to put her into that category. The title “Woman in the Reeds” immediately brings up Judeo-Christian stories as it is set in Egypt on the Nile during the slavery of the Jews. The lead character, who is never named, pretends to madness so she will be left alone to gather bones along the Nile that she believes call out to her. These are the bones of her baby that she begat by way of rape, and ended with the child’s murder by a soldier of Egypt. She gathers these bones hoping that she will find them all and be able to bring back her daughter as the goddess Isis did for her brother-husband Osiris after Set the destroyer killed him. She instead is visited by Set himself.

This short but very full story deals in castes of various kinds, the power or non-power the weak have over the strong, including savage rape and murder, as well as the Egyptian pantheon and the Biblical story that undergirds it all. The beliefs of the author are not made manifest, thankfully. This is a story that is open to many interpretations and should be read many times.

“Lazy Dog Out,” the novella of this issue, is again space SF but much closer to home. Khifi, known as Fox, is a tug pilot on Tandou moon station orbiting Guratahan Sfazil. Khifi has risen from the lowers of the station and has reached the position of pilot, has a loving wife who is a famous artist and helps the lowers as much as she can while remembering her roots. The story concerns a plan based on greed to rid the ship of all lowers by implicating them in an “Earthers first” campaign to destroy all aliens. It is a battle of wits, pure adrenalin, and an eventual space battle. But Suzanne Palmer, like Ms. Rusch in this issue, makes all this seem all the more important to the reader because of the characters involved. Khifi herself, her wife and her work partners, not to mention the lowers all become startlingly real to us. Again, if all military SF were written like this I would be reading a lot more of it.

So, some definite winners this issue along with some stories containing good ideas less than successfully handled, but nothing unreadable or not worth your time.