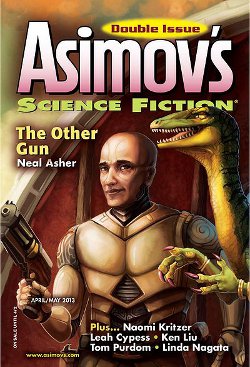 “The Other Gun” by Neal Asher
“Writing in the Margins” by Joel Richards
“Julian of Earth” by Colin P. Davies
“Spider God and the Periodic Table” by Alan Wall
“Warlord” by Tom Purdom
“Through Your Eyes” by Linda Nagata
“Gray Wings” by Karl Bunker
“The Wall” by Naomi Kritzer
“Distant Like the Stars” by Leah Cypress
“The Oracle” by Ken Liu

This issue of Asimov’s has just about something for everyone. All are well written. Which of them will be your favorite is truly according to taste.

The issue begins with a space opera adventure by Neal Asher. “The Other Gun” is a part of his continuing series of novels and short fiction set in the Polity(human)/Prador(alien) universe. It concerns Tuppence, a member of the Polity and his sidekick Harriet, a human being changed to resemble a dinosaur. They are in search of sections of something called the farcaster.  They do this on the desire of the Client, who is a member of a third race that has been mostly destroyed by the Prador.  In the course of this adventure we go through various set pieces of adventure and violence until the truth of the client and the search for the farcaster are revealed in a nicely detailed story.

To my mind this story was much like a Michael Bay movie in a space opera setting. Violent (but exciting) set piece after set piece with just enough connective matter to explain what is going on and keep us guessing about what will be coming. It is an excellent piece of pop culture cotton candy.

With “Writing in the Margins” by Joel Richards we are on Earth just slightly in the future. The only difference is that previous lives have been scientifically proven to be true. Each of us have a varied cast of past lives and will continue into another life when we die. This has surprising complications to the life of Tim Marchese, a cop in San Francisco. Death becomes an option and if you don’t like your life you can rob a bank. You either get away with it or you die and move on. If caught, you plead for death. The protesters have changed sides in the death penalty question with conservatives wanting lifetime incarceration and the liberals fighting for the death penalty.

The stage is set to tell a story about a rape and murder that occurred 7 years ago. A 7 year-old girl remembers her past life as the murder victim in the unsolved case. The action follows from that premise. But the whole story is wrapped around the personal life of Marchese and his wife, a paraplegic caused by a robbery at a bank.  Nice work by a writer that is new to me.

Colonists on an alien planet is the central trope in “Julian of Earth” by Colin P. Davies.  Tarn Erstbrauer is one of the colonists on Niselle V. He runs a tour that is based around the legend of Julian who was “the legendary imperial soldier who would not accept the war had been over for a decade…continue to fight against the revolutionaries.” Julian supposedly lives in the jungles of Niselle V and is helped by the rarely seen native species. Tarn was kidnapped as a child by Julian and retells his story over and over as a guide. A trio of wealthy documentarians engages his services to see the places that he visited during his abduction. This unveils secrets (from the documentarians as well as Tarn) as to the truth of the story.

This one is a solid piece of extrapolation with very human characters that keep you reading.

This next entry had me baffled by the end. “Spider God and the Periodic Table” by Alan Wall  concerns a cop researching the death of a scientist who is killed by having only his lower (or crocodile) brain turned into crystals, and with an unknown type of polymer incised on his forehead. This leads the cop to other scientists to find out where these two totally impossible things came from. There is a love story but when it gets into Egyptian Gods I got lost. I like fantasy and SF together but I could not follow this one.

Tom Purdom’s “Warlord” is the third in a series started in 2010. It concerns an alien planet that had two major species before humans established a colony. In past stories the colony has been taken over by a sociopath and three people have escaped to the alien species. These aliens fight each other, but to fight the human presence, Harold (one of the expat humans) brings these warring species together (in one city at least) to fight. This story is about the combined strength of the aliens, and knowledge of the advanced humans who are aligned with them, as they fight against the soldiers of the human colony. It has fast and furious action – more on the reality side of things with tactics and strategies being important, rather than just scenes of mayhem as in the Neal Asher story above.

This held my attention and was well done but it’s not particularly a favorite subject of mine.

Linda Nagata, who has made a welcome return to SF in the past few years, gives us “Through Your Eyes.” It concerns a young man in a very near future Earth. James Shelley has “been wired for almost two months and love[s] it. My cousin is a cybernetics engineer and he set me up with the prototype system I’m wearing made up of the overlay screens in my eyes, audio input and output in my ears, and a dual antenna of two fine lines tattooed at the back of my jaw. It’s like God’s vision.”  The story involves this new prototype as James meets with his girlfriend, then meets a biddy and gets involved in a protest march. The characters are well drawn and the prototype seems just around the corner. If I have any problem with this it’s even though it’s a complete story, it feels thin. Perhaps I just need more of this one.

My favorite story is “Gray Wings” by Karl Bunker. Karl is a very new author who has written excellent stories and this one is no exception. It is a scientifically sound work about a girl bioengineered to now sport wings. While on a winged race she crashes into a very poor country and is nursed to health by a local young man. It is poignant and illustrates in a subtle way the differences (good and bad) between the haves and have-nots. This is short but powerful – the best kind of short story.

“The Wall” by Naomi Kritzer is in reference to the Berlin Wall. It is a time travel story beginning in 1989 when a college student is visited by her future self to get her to visit the wall the night it comes. Many obstacles are placed in her way – not to mention her disbelief – but parental problems and money cause her to set the idea aside. Her future self makes many visits to try to convince her. If she goes to Berlin and why her future self wants her to go are two enjoyable reasons to read this story.

Leah Cypress portrays an interesting idea in “Distant like the Stars.” What happens when quantum doors are found that can make literally the whole world your back yard? Is it a boon to the community or a strangulation of variety and privacy? Sylvana is one of the few who can open doors to other places. The ability runs in her family. There must be two doors, one at either end, but once built it takes a person like Sylvana to open them for the first time. She has left Earth on a spaceship to get away from this situation but now the colonists are insisting on a door between the colony and Earth. Sylvana’s background is nicely sketched in and her decision to open this door or not brings about an intriguing solution.

The last story is by the ubiquitous Ken Liu. “The Oracle” is set in a near future. The Oracle allows each person to see into the future to the defining moment of their lives. Many see themselves happily surrounded by grandkids or in nursing homes. However, those that see themselves in jail for murder are rounded up long before they can murder whoever they will eventually murder and are jailed. Penn Claverly is one of these pre-criminals. He is visited by a young reporter, named Monica, who had difficulties with her minute of looking in the future as well. Mr. Lui discusses the various protests around this situation while weaving a delicate relationship that grows between Penn and Monica. This is an example of Ken Lui at his best. He takes one change and discusses many of the reactions to such a change while grounding it in the relationships of his characters. I liked this one very much.