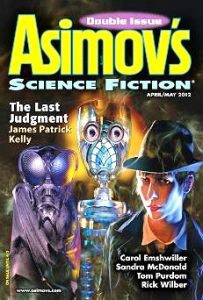 “The Last Judgment” by James Patrick Kelly takes place in the same world and features the same protagonist as his 2005 novella, “Men Are Trouble.”

Background: The story is set in our near future, about forty years after all the men on Earth have been ‘disappeared’ by mysterious alien invaders, small, winged beings known as devils. With the more aggressive and volatile half of Earth’s population thus removed, the remaining half of humanity—women—unsurprisingly go nuts during a time referred to as  the Crazy Years, resulting in a billion or so deaths and a largely traumatized population of ‘grannies’ and ‘janes’, ‘fluffs’ and ‘tommies’, many of whom are experimenting with gender switches. Though the Devils are largely hated, they are also feared; though they don’t directly communicate with humanity, the bots the Devils have constructed by the hundreds of millions to help keep society running can and do act as interlocutors between humanity and the Devils.

When Private Investigator Fay Hardaway is hired by ultra-wealthy ‘granny’ Maude Descano to locate a stolen painting—a Hieronymus Bosch—Hardaway quickly connects it with Andy (neé Anne), Ms. Descano’s missing ‘tommy’ daughter. Before long, Fay has an address, and arrives a moment too late to prevent the murder of Andy Descano’s partner, Beetle, apparently by a Devil. She finds the Bosch; but has first the police, then the mayor, and finally her old acquaintance, the Devil Seeren, to deal with, and everyone appears to have their own agenda.

I confess to a knee-jerk mistrust for hardboiled SF mysteries that emulate Hammett or Chandler (and the setup here has distinct echoes of The Big Sleep); but once past that, I found myself immersed in Kelly’s world and his well-paced plot. Kelly maintains a good balance of thoughtfulness and humor here, and dishes out some honest social speculation for once free of overt baggage and ideology. Oh, sure, the protagonist forgets her weapon at one point (I hate when they do that, so unprofessional), and Kelly gives a bit too much space to toddlers and domestic detail for my liking, though this last arguably serves to solidify Fay’s character; and these are, on balance, small gripes. In conclusion, a solid, entertaining piece, which I expect will find its way into at least one of the award listings.

Since time travel is one of my favorite subgenres of SF, I launched into “Living in the Eighties” by David Ira Cleary in a frame of excited anticipation; not just a time-travel story, but a time travel novella! This was going to be fun. Unfortunately, the story didn’t—for me—live up to its promise.

The setup is good, with all the elements in place for a cracking story: Bob, our depressed protagonist, has never gotten over the death of his girlfriend Gretchen, after an argument led to her vehicular suicide in 1991; Clayton, his rock musician buddy, wants a cure from the diabetes that’s slowly killing him. So when Clayton stumbles across a website, myfourthdimension.org, whose software makes time-travel accessible via browser, our protagonists are hot to go, one into the past, the other to the future. And Cleary spices up the tune further with fun riffs like:

‘The site was called myfourthdimension.org. It was text-heavy, academic-looking, with no graphics at all.’ …  ‘Its claim was that the flicker of its screen when synchronized with special music would disrupt the “forty-hertz cycle binding the thalamus to the spatial-temporal structures in the parietal and occipital lobes.” Then once disrupted, the screen would flicker and music would play at a frequency “to impose an organization of the temporal submodules coincident with the date that the subject chooses.’

Although Mr. Cleary offers some mildly interesting speculation on our possible near-term future as society finally comes to grips with climate change, I found little meat and a good deal of fat and gristle to this piece.

First, the story is so loaded down with period detail and description as to weary anyone not interested in reliving the eighties. Even allowing for the need to solidly ground the reader and keep them aboard, the detail and descriptive matter—especially with regard to the music scene—seems at times to border on the obsessive, and doesn’t let up even toward the end, when you’d expect, maybe even pray for, a quickening of the action.

Second, the story suffers from some clumsiness, such as when Clayton goes to 2050 to bring back the formula for a diabetes cure armed with a flash drive from 2012, and succeeds (“I got the diabetes cure data on the USB drive”). Really? They’re still using USB drives in 2050, not to mention a compatible OS?

Also aggravating was the constant harping on about depression and antidepressants, because talking about depressed characters and suicides and toes lost to diabetes is no substitute for making one care about the same characters—and I didn’t. If some of the effort put into getting the period detail right had been devoted to creating sympathetic characters, this piece would have been far stronger. And beyond the premise of time travel via internet browser, which alone is not enough to carry a 50-page novella, I didn’t find much fresh thinking about time travel here. The takeaway line of the story, repeated by the trickster character at the end, is, “What is memory? What is dream?”

These faults wouldn’t be so egregious to me if this were a much shorter story, or in another venue; but given how very few slots are open for novellas in the top print magazines, the bar has traditionally been—and should remain—a high one.

Rick Wilber’s “Something Real” is an excellent Alternate History novelette and—to my mind—the strongest piece in this issue.

The story centers itself around baseball player Moe Berg. Berg, a Princeton and Columbia Law School graduate who spoke several languages, was in real life also a wartime spy for the OSS (Office of Strategic Services,) tasked in 1944 with the assassination of Werner Heisenberg if it seemed the Nazis were too close to developing a working atomic bomb.

The story closely parallels Berg’s real-life assignment, except that it begins in an alternate timeline—one in which the Nazis seized the Allied fuel depot at Bastogne (Battle of the Bulge), giving them the ability to carry on the war. Berg’s mission seems clear until, with the appearance of a mysterious woman, Moe starts experiencing stomach-wrenching timeslips as reality turns to a quicksand of shifting worldlines and histories, both past and future.

A clever and well-crafted story that will delight AH fans, this one also keeps the reader guessing as to which future will ‘come to pass’ (if the term even applies to an Everett-Wheeler cosmology). Strongly recommended.

“Bonding With Morry” by Tom Purdom is the thoughtful, bittersweet tale of Morry, an old man who must come to terms with his robot helper, Clank. Mr. Purdom keeps the story from straying into sentimentality, and keeps the focus on the soon-to-be important, vexing question of how much we want our helper machines to look like people. Although I felt the part about the Foundation for CyberAmerican Rights a little silly and a distraction, I enjoyed this one.

Sandra McDonald’s short story, “Sexy Robot Mom,” is the story of Alina, a robot built to resemble an attractive, buxom brunette. Alina’s sole purpose is to function as a surrogate mother; once impregnated, she lives with the host couple until she brings their baby to term, saving everyone else the fuss and bother of conventional pregnancy.

‘On the other hand, her expandable womb was adjustable for time and temperature, had a durable protective shell, and could wirelessly transmit information the same way any kitchen appliance could.’

The story begins with us following Alina through a couple of pregnancies: in the first, we see the ever-formal and imperturbable Alina variously mistreated; in the second, a pair of loving gay men employ her services. But just after she’s been impregnated with Dan and Mark’s second baby, catastrophic external events force her CPU to switch both her and her womb to ‘stasis’ mode. Decades later, rescued from her ice tomb, Alina finds the world around her radically changed.

There’s a lot to like about this story, and my major issue is that—given the cool premise coupled with Ms. McDonald’s fine writing and poised social critique—I’d have liked to see a substantially longer and more complex story emerge. This is a pleasing enough piece, but it could have been so much more.

In “Sensitive, Compartmented,” Gray Rhinehart serves up a gripping piece of SF.

Air Force Captain Holly Bergman has been kitted out with implants which make her into a Sensitive, part of the covert COBRA MIRROR program.

‘Governments good and bad had become adept at hiding their signals as commercial encryption got better, and even hiding their signatures, so Washington had turned to more exotic means with varying degrees of success. COBRA MIRROR was a revival of the old MK ULTRA experiments, with electronic enhancements instead of psychotropic drugs.

‘Snug inside her aerogel-filled capsule in the belly of the speeding aircraft, her perception reached out with more precision and power than a Class IV laser. If the systems weren’t feeding her data, she would be like a sponge soaking up everything around her; when she was hooked into the sensor grid, she was like a pipette.

Overflying Russia in a specially-equipped spy plane,* Holly has no sooner picked up something of intense interest than the aircraft comes under attack. Before long, Holly finds herself captive on a Russian vessel and face-to-face with a terrifying reality.

A strong story with some fine characterization, this one is up there with Wilber and Kelly as best-of-issue.

* [A minor complaint: some confusion as to whether it’s a modified Strategic Recon or a Fighter aircraft, as the text wobbles between SR-129 and F-129 designation. Unless the SR-129 is actually a modded F-129 (in which case the reader needs to be told), Asimov’s appears to have abandoned copyediting altogether. Almost every story in the last few issues suffers from little glitches like this, and we won’t even talk about not checking the spellings of foreign words.]

In “Souvenirs,” Ian Creasey tells the tale of Kendra, a down-on-her-luck trader/artisan at a busy spaceport on the planet Beamish. When a mysterious alien buys her most expensive item, Kendra suddenly has enough cash to get her sculpting tools out of hock and buy her kids those much-needed implant upgrades and mineral supplements. But when she discovers the 1,000-scrip bill is a forgery, Kendra sets off to find the alien who cheated her.

A fast, fun read with plenty of nice space opera detailing and a satisfying resolution, even if sometimes Kendra’s contacts seem rather too nice to be true.

Josh Roseman’s short story, “Greener,” is a love story set in the medium future (if I read the hint correctly, 2080).

When Scott decides not to renew their four-year contract for a third term, Naomi is furious. Scott tries to distract himself with other women, but nothing works, and Scott soon discovers he can’t live without her.

A thoughtful, well-written story in a credible future world.

“Riding Red Ted and Breathing Fire” by Carol Emshwiller is an amusing fantasy piece about a self-important soldier who bonds with a dragon of sorts, a ‘heigthwrick’. When our protagonist is sent to a town to return the annual tithe to the city, he gets more than he bargained for, and not in a bad way. Original and fun.