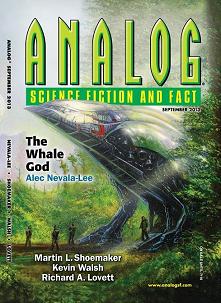 “Murder on the Aldrin Express” by Martin L. Shoemaker
“The Whale God” by Alec Nevala-Lee
“Full Fathom Five” by Joe Pitkin
“The Oracle” by Lavie Tidhar
“Life of the Author Plus Seventy” by Kenneth Schneyer
“Creatures from a Blue Lagoon” by Liz J. Andersen

As you might guess from the title, “Murder on the Aldrin Express” by Martin L. Shoemaker is a mystery story that takes place in space. The leader of an expedition on Mars has died in a climbing accident, and a piece of evidence is uncovered pointing to the death being the result of foul play. Set up as a series of interviews of the suspects, this novella is a showcase for the Poirot-like deductive powers of the captain of the Aldrin, Nick Aames. Adding to the intrigue is a romantic twist; one of the suspects is an old flame of the narrator. He is forced to confront his feelings for her—and about her possible guilt—as he witnesses the unfolding layers of the investigation.

I was a little disappointed that the story doesn’t resemble the Agatha Christie novel, except for it being a mystery involving a dead man. Still, it’s a competent mystery and managed to surprise me with its resolution. I might have been even more surprised and excited had I actually known something about the science that provided the key to solving the mystery, but as it was, my response was noncommittal—recognizing a skillfully written story but not having the proper background or interests to truly appreciate it. What I did particularly enjoy was the excellent character development, and the heart and emotional depth brought to the story by its romantic aspect.

“The Whale God” by Alec Nevala-Lee takes place in a tiny fishing settlement in Vietnam during the war. Army captain Exley is faced with a delicate situation—a whale washes up on the beach, evoking superstition and fears of bad omens, as whales are considered gods by these people. Exley tries to save the whale and fails, jeopardizing the goodwill the army has gained with the villagers. And then…more whales wash on shore. During the attempted rescues and after, Exley keeps seeing a strange ghostly figure at the edge of his vision—and even as we discover the reasons why these strange events are taking place, we are left with a feeling that something much more significant and spiritual has happened.

This novelette is beautifully written, a true pleasure to read. It tells a simple, moving story within a historical context and layers it with myth and mystery. Whales washing up on the beach and it being considered an ill omen isn’t a new theme in storytelling, but this tale expresses it in a unique and powerful way that speaks to explanations not being either-or between science and spirit, but complementary.

“The Oracle” by Lavie Tidhar is the second novelette of this issue. It’s a bit complicated to summarize, but here’s my attempt: The narrator, who lives in the future, is telling the story of the transformation of the area of Palestine and Israel into what it has become. In her (or his?) narrative, she goes back and forth between two related tales from two different time periods.

In the first time period, which is the reader’s present day, Matt Cohen is a scientist who comes to Tel Aviv and creates the grounds for breeding life in digital code—for computers to become self-aware and evolve as sentient life. This is the story of the beginning of the Others, the only truly alien race in the universe.

And then there’s the parallel story of Ruth Cohen, a descendent of Matt Cohen. Ruth is a young woman who doesn’t know what she’s searching for until she has contact with the Others, and she feels an instant of fulfillment. She follows a path to become the Oracle by merging with the Others to join a vast Conversation—like a giant spiritual-energetic Internet permeating all space and matter.

This is an ambitious story, written for intelligent readers, and I think it realizes its aims. It effectively compacts centuries of history and technological development into a relatively small space, relating an appealing (in my opinion) possible future for a seemingly unsolvable present-day conflict. I admit that the story feels a couple grades higher in reading level than I’m comfortable with, but despite having to think harder than I like to, I could clearly see the story in my mind—the words and the narrator’s meandering voice never got in the way—the mark of an excellent storyteller. If you enjoy beautifully written, complex literary science fiction stories and like the idea of a more positive, philosophical spin on the “rise of the machines” theme, this may be the story for you.

In “Full Fathom Five,” by Joe Pitkin, Maria is the sole survivor of an expedition to Europa, a planet seven hundred million kilometers from Earth. She is in the ship Ariel at the bottom of an ocean, with only the ship’s computer for company. In one of the ship’s tanks she holds the first alien life she’s encountered—except it’s dead, perishing upon exposure to the ship’s lights. Oddly enough, the life form looks like a giant penis.

As Ariel’s energy supplies dwindle, along with Maria’s options for contacting Earth to request rescue, Maria discovers an odd connection between her dreams, the dead alien, and strange emissions made by the alien that happen to be exactly the substances she needs to make the components for communication with Earth.

This is a literary science fiction tale, layered with symbolism and feelings and responses I don’t quite understand. Dreams, phalluses and their emissions, and questions of death and loneliness are interwoven throughout the story, giving it a lovely surreal quality even with its hard science and clear, elegant language. I enjoyed the read, although I can’t say I really knew what was going on by the end.

My two favorite stories of this issue are the funny ones. “Life of the Author Plus Seventy” by Kenneth Schneyer is about a lawyer-turned-writer whose debut novel is so unpopular that he checks it out at the local library just so it’ll have one borrowing date on it. Unfortunately, he forgets about it and a decade later is contacted by J3, the “latest innovation in public institution customer-service software,” who wants to fine him for $102,400. What follows is a chronicling of the narrator’s attempts to avoid his exponentially growing fine. The title of the story indicates one such loophole the narrator uses to try to beat J3, as he takes advantage of his company’s contract clause that maximizes its hold on authors’ rights by putting said authors into hibernation.

I loved this story—among other things, it makes fun of lawyers, writers, and those terrible computer answering services that are already taking the place of human customer service. Each time either the narrator or J3 outsmarted the other, it got a laugh out of me. This is a story that makes me really glad I got this issue to review—I want to keep it and reread it.

In “Creatures from a Blue Lagoon,” by Liz J. Andersen, interplanetary veterinarian Taje is stuck with an assignment to deal with some multicolored underwater creatures whose enormous sick underwater “cow” named Floobar is sick. Taje is outfitted with a smart sub and diving suit—both artificially intelligent but just as much smart aleck as smart—and embarks on her journey into the Zarjassian sea.

Taje encounters her first difficulty when Floobar keeps eating the bioscanners. Then Floobar eats her, and she can’t get out. To the tune of her diving suit’s wisecracks, she flees from Floobar’s digestive acids and finally discovers the mysterious secret to the cow’s illness.

This is another unique story that is so much fun to read! It’s sort of like a slapstick science fiction version of a warm-fuzzy veterinarian-in-the-field James Herriot story, and it makes me want to read more interstellar veterinary adventures. I particularly liked the dialogue between the veterinarian and her smart equipment, but everything else in this story is to like as well.