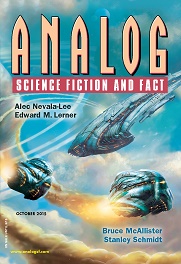 The October issue of Analog serializes a novel by Stanley Schmidt, so has just five stories.

The one longer work, “Stonebrood” by Alec Nevala-Lee, is the story of Marius, who is working on finding ways to stop a coal fire that’s been burning underground for years. Technology has been developed to map the fire, as tiny bee-like drones go out to find the hot spots in order to develop a plan to put it out. But there are some dangers, and some secrets in Marius’s past that have to be resolved. The story is a nice combination of hard SF and personal history that is woven together with a lot of skill.

It’s dystopia time in Joe Pitkin‘s “The Daughters of John Demetrius.” Mendel, who seems to be genetically enhanced, is wandering the southwest, finding a small village where people of his type are called gods. The village is primitive, but Mendel sees that one of its children might benefit from the schooling he can provide. It’s more setting and mood than anything else, with a gratuitous battle scene at the end that really doesn’t add much to it.
I’ve read several stories in the past month with the concept of animated tattoos as a descriptive throwaway. In “Butterflies on Barbed Wire,” Marie Vibbert brings it to center stage. Damien is the next generation of a family of tattoo artists, and who had a crush on Aubrey when he was 16. They stage tattoo dares, where she tries to push him to get inked in ways he might not want, and Damien calls her bluff. This isn’t a stereotypical Analog story, and is primarily focused on Damien’s feelings, with a slice-of-life mood that concentrates on character instead of plot. Overall, it’s well written, though it’s mostly a reason to be sad about things lost.

Ted White has been writing for ages, and “The Philistine” is an old fashioned well-made tale. Harry is a failed artist, given a government job of duplicating famous works of art using duplicating technology. But the old work has to be destroyed. It’s an interesting dilemma, and raises the question about why a work of art is valuable, among other things. It slowly turns into a caper story, with some clever twists. I found it an interesting read.

Another name I recognize from the 60s is Bruce McAllister, whose “My Father’s Crab” is a fond reminiscence by Brad of his father, a military man who worked on top secret projects. At one point, his father is bitten by a strange type of crab, which leads to some minor health problems. The story is told without stopping to explain things, as though Brad doesn’t want to call attention to them, but it’s still clear to the reader, leading to a strongly emotional ending.

Chuck Rothman’s novels Staroamer’s Fate and Syron’s Fate are available from Fantastic Books. He has fiction appearing in Temporally Out of Order, and upcoming in Flash Fiction Online and Digital Science Fiction.