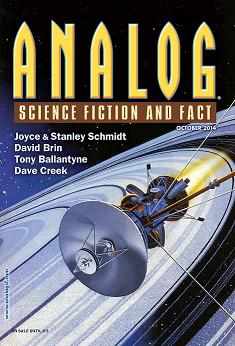 “The Jenregar and the Light” by Dave Creek
“Threshold” by Tony Ballantyne
“Opportunity Knocks” by Joyce & Stanley Schmidt
“Each Night I Dream of Liberty” by Andrew Barton
“Unfolding the Multi-Cloud” by Ron Collins
“The Hand-Havers” by Mary E. Lowd
“Chrysalis” by David Brin

“The Jenregar and the Light” by Dave Creek is a story of alien invasion—at least on the surface. The aliens are truly alien, with a hive mind and an insect-like nature, but what starts as a promising first contact story becomes a “race to find the cure.” More than anything, it is a story of self-discovery for the two protagonists—Mike Christopher and Kamau Kimathi —protagonists who, interestingly, never meet. As a short story, this tale would work quite well, but at novella length it becomes ponderous and inflated with a bit of fluff. There are scenes which have no real purpose, regardless of the action involved, and the science behind the resolution is nonsensical. Not the actual mechanism, but the manner in which it is created. Only in television SF do we find a lone researcher who finds the answer just in time to save humanity. When characters die in a story, we, as readers, are meant to care. Sadly, that never happens, as each death is nothing more than a meaningless diversion. This feels like a discarded first draft of Independence Day. There is, for the most part, some nice writing here, but a big red pen could have made it so much better.

Science Fiction and Horror don’t always work together, but in the proud tradition of Harlan Ellison, “Threshold” by Tony Ballantyne takes a bit of each and makes it something satisfying. Eduardo Delgado is a guide on Lucky Planet—or at least, the four thousand square kilometers of jungle the S (a race of “silicon based semiartificial life-form[s]”) allow humans to live in. Taking a group of xenobiologists into the jungle to study the floating hives of omnivorous insects there is just the start of his troubles. Along the way Eduardo will discover not only what he believes is worth dying for, but just how much pain a man can endure in the service of that belief. More importantly—how does a man really know that what he dies for is the truth, and what is just what we are ready to accept? Like previous stories, Ballantyne works thoughtful SF the way it should be—using it to flay the body of society to expose the disease beneath. Recommended.

First contact stories (or second in this case) can be either dour or fun—there doesn’t seem to be any other option—and “Opportunity Knocks” by Joyce & Stanley Schmidt falls neatly into the latter category. Mixipoxi’s problem is that, while hunting for the terrible Xiphar and his dreaded technology, he discovers that the world that must be cleansed of the infection doesn’t really need help. What’s a poor Patingar to do? There is a small plot hole that never gets filled, and the resolution is a bit quick and trite, but the story is fun nonetheless.

Behold the Libertarian Utopia! “Each Night I Dream of Liberty” by Andrew Barton gives us a good look at the lie behind the movement. Taryn Autumn is a Chinese elf working for the United Nations Security Council, and she’s here to chew bubblegum and kick some ass. Unfortunately for Sebastian Cross, she’s all out of bubblegum. This is a delightful romp of a detective story in the Golden Age style, with at least one red herring to keep you busy, and enough Ayn Rand references to choke John Galt.

“Unfolding the Multi-Cloud” by Ron Collins never names its characters, leaving them as mere cardboard cutouts of a representation of a picture of human beings. Their motivations are as thin and flat as their character, and the whole comes off as a whiney wife pining for her husband to be at home more and at the office less. The male character is a “folder,” living his life in the “cloud” and working as a data miner. The wife sits at home and whines. That’s about it. There is, though, some nice writing, but not enough to overcome a lack of story.

What is it with stories about “women accepting their lot in life” this month? Has feminism just up and died while I wasn’t looking? “The Hand-Havers” by Mary E. Lowd gives us a well-written, and creative, story of life in pre-feminism America as told through alien eyes. Delundia is a child about to come of age, without some very useful knowledge. She wants to birth hands, you see, to become more like the bachelor/inventor Ebbence, but life doesn’t always work out the way we envision it as children. The whole thing could easily have taken place in your average “Red State” in the early 1950’s, and the ending left me cold. I doubt that was the purpose, but “lie back and enjoy it” has never been part of my idea of romance.

David Brin is a master craftsman, and in his latest short story, “Chrysalis,” he doesn’t disappoint. Starting out as one kind of story, it quickly moves to another, intermediate phase, and at last settles into something entirely different. If that sounds like the life-cycle of a butterfly, well… Like Ray Bradbury’s identically titled story, we have a man who is undergoing a transformation from one form of human into something else, because of SCIENCE. That’s not a dismissive statement. Where Bradbury’s story—like almost everything he wrote—glosses over (or even completely ignores) the science, Brin embraces it and tries to make it real. There’s always danger in that, as every scientific advance washes away the premises of formerly great stories. Still, Brin bravely takes a valiant stab at the science, and ultimately makes me believe it. This is a marvelous detail in all of Brin’s stories I have read, and one that many writers forget to do. The only other major difference between the Bradbury story and this one is in the ending. While the Bradbury ending was satisfying in an escapist way, Brin’s is less informative and ultimately more powerful.