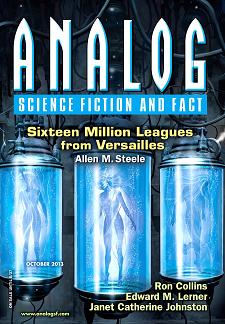 “Lune Bleue” by Janet Catherine Johnston
“Sixteen Million Leagues from Versailles” by Allen M. Steele
“Following Jules” by Ron Collins
“Putting Down Roots” by Stephen R. Wilk
“Things We Have in This House for No Reason” by Marissa Lingen
“At the Peephole Palace” by William R. Eakin
“Conscientious Objectors” by Jay Werkheiser
“Fear of Heights in the Tower of Babel” by Carl Frederick

At the Extra Terrestrial Exploration facility on the far side of the moon, Miriam Clancy and Paul Holeman are hoping to pick up signs of intelligent life. They’re at the facility with Bruckner, a man who may have spent too much time on the moon for his—and their—own good. Throw in some good old fashioned destructive robots and this is the making of a good old fashioned Clarke-ian adventure.

Janet Catherine Johnston manages to capture the classic-style SF atmosphere with likable characters, good, bad, and the shades of moon-grey in between. There’s enough science talk to believe these characters know how to do their jobs, but it doesn’t bog down the reader. It’s a satisfying story with a satisfying conclusion, something that seems to have become a rarity in shorter pieces of science fiction.

From the royal palace at Versailles to the Valles Marineris canyons of Mars, the vase, once belonging to Louis XVI, of the war god Mars, had a long and eventful trip. That trip ended in a crashed cargo lander, and probably destroyed the vase. But Dr. Camille Bacquart remains optimistic that its container kept the irreplaceable artifact safe. With the help of Will Baynes, a supervisor at Arsia Station, and Lincoln McGrath, a man who knows the canyons better than anyone, the trio set out to recover the artifact, whatever that may take.

Allen M. Steele’s story is one part search-and-rescue, one part travelogue, and one part classic science fiction. The setting and scenario of old-meets-new is endearing, but about half-way through, the story ruins itself. In such a short story with so few characters, it’s not unreasonable to assume that every character will play a significant role. So when a character comes and goes in a few paragraphs, you can expect them to come back. It’s unfortunate, even with the something-of-a-twist ending, that it is so blatantly foreshadowed so early on.

Jaime and Jules are university students and have been best friends forever. They spend most of their time in the OC—Open Community—a type of virtual reality hub that exists between game worlds. There they can do anything, be anything. All Jaime wants, though, is for Jules to be in love with her. All Jules wants is to have a life worth living, something she doesn’t feel university is gearing her towards. But if she could just live, actually DL herself into the OC, then she’d be happy. So the question remains, how far will Jaime go to be with the girl she loves so much. Will she leave her body behind and risk the DL just for the chance?

Jaime and Jules have different problems, but deal with them in similar ways. For Jaime, it’s less of being a lesbian than it is the fact she’s in love with Jules, someone she’s known so long and someone who has never earnestly returned that kind of affection. For Jules, it’s not knowing what to do with her life, and being so frustrated she’d rather risk potential suicide DLing her consciousness into the OC than face the real world. Both of them feel like they’re in a box, yet they use the OC—a virtual box—to escape the difficulties of reality for the ease of unreality. It’s a story that deals with real issues, but maybe could have focused more on the difficult moments, letting the reader absorb their impact rather than moving on as quickly as they do.

“At the Peephole Palace” by William R. Eakin

Paradise Palace. A peepshow theater, unclean on all accounts: the furniture, the patrons, and, most especially, the show projected on the big screen. Eduard is there, taking it all in. He talks about how it was once a stage for live performances of all types of untoward productions and how it was eventually changed to a screen and projector. What didn’t change was the show itself: always something society deemed taboo and restricted. Now, Eduard stands there, years removed from his youth; now as the inventor of the system that has placed unreal clouds of advertisements in the air, disrupting the airways, disrupting the freedom to see the stars. Now, just before the show starts at the Paradise Palace.

William R. Eakin’s story makes the reader question the dichotomy of the images society wants them to see and the images obscured. The line between taboo and acceptable is broadening, while becoming greyer. What are things coming to when nature—human and otherwise—is confined to the proverbial shadows? It’s a good question, and a good story.

Why on Earth, or Mars in this case, would anyone want to keep a bunch of useless stuff? That’s the question here. Why a pressure suit, when there’s no chance of a random depressurization on the planet? Why guns, when there’s nothing to hunt? Why keep campaign buttons promoting the side that lost? It’s all very perplexing, this grocery list of things in this house…

The narrator can’t put any sense into her family’s decisions to have all this useless stuff lying around. But by the end of the story, the reader should. It’s never explicitly stated, but it’s not really hidden, either, and is a fun little tale ending in a successful little twist ending.

A group of friends meet for their monthly soiree on a backyard deck, coming together to taste Philip’s latest home-brewed beers. As part of their meetings, they pick a topic, discuss, debate, and banter. The topic this time? Agriculture, prompted by the crackers and grapes they nibble on between tastings. They discuss the history of civilization and the role agriculture played. But eventually, Kevin turns the discussion on ants, and more specifically the fungus that, in essence, turns ants into zombies, and how that all relates to humans…as they sit and sip their beer.

“Putting Down Roots” flows easily between each character’s dialogs. It’s written well and has an entertaining idea, though not one that is very surprising. Once the reader catches where things are going, it becomes a smooth ride to an expected destination. The problem with reviewing it, is that it doesn’t actually contain any science fiction. It’s a group of modern-day friends, talking about regular topics. They speculate, yes, but that does not make this an SF story at all.

An un-characterized war has broken out between the United States and China. Now, Dr. Mei-li An has come to the States in a cultural exchange meant to begin mending the severance. Mei-li wants to study Beidelman’s syndrome, and more specifically a soldier named Lambert afflicted with the condition that causes what would otherwise be classified as a coma, except the body can still feed itself and there appears to be nothing wrong with the patient or his implants. Mei-li, like other Chinese people, are horrified with neural implants and the intrusion of the sanctity of the human body, but she believes, even if her American counterparts do not, that they are part and parcel with Beidelman’s syndrome.

The narrative is split between Mei-li in the present and Lambert in the past. Mei-li’s half of the story illustrates a world where there is no middle ground between America and China, and between those who have been modded with technology and those who haven’t. Lambert’s is the eye-on-the-ground, fighting the war and acting as witness for the reader, laying the foundation for Mei-li’s eventual conclusion. While the story means well, much of the execution comes off as stiff and plot-driven, like Ted, the doctor who embodies the closed-mindedness of society. He often speaks and acts like a petulant teenager than an adult with a PhD. While some of that is explained, it still feels stilted and takes away from the atmosphere of the setting.

“Fear of Heights in the Tower of Babel” by Carl Frederick

There’s a hostage situation at the Tower of Europe and Dr. Malcolm Sinclair has been called in as negotiator. The suspect is a sentient elevator. And the person who called him in is his arch nemesis, Dr. Steven Hays. Why are they at odds? Because Hays believes a computer could successfully pose as a human in an online chat, while Malcolm does not. It doesn’t take long before Malcolm suspects something is fishy, especially when the elevator asks for 2 million Euros to be deposited into a bank account.

What could have been an intelligent verbal battle between human and machine, devolves into a lot of nothing. There is no rising action, there is no real mystery, there is nothing but a sequence of events that gets Malcolm high off the ground to deal with his fear of heights. That’s all this story is, and it doesn’t even do it well.