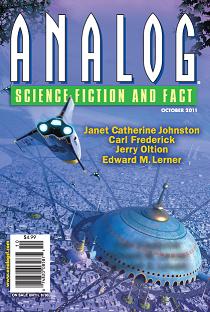 “Energized” (Part 4 of 4) by Edward M. Lerner (not reviewed)
“Of Night” by Janet Catherine Johnston
“The Last of Lust” by Jerry Oltion
“The Bullfrog Radio Astronomy Project” by Brad R. Torgersen
“The Lycanthropic Principle” by Carl Frederick
“The Sock Problem” by Alastair Mayer

“Of Night” by Janet C. Johnston begins when a mysterious woman walks out of the darkness and into a camping ground, where a group of campers are telling ghost stories and toasting marshmallows around a fire.  She introduces herself, and offers to tell a ghost story of her own.  She then proceeds to narrate, in a droning monotone, a lengthy science fiction novelette to the campers who, despite being riveted by the story — the only truly spooky thing in the piece — have all fallen asleep long before she finishes.  But nothing will deter our intrepid narrator, Frances, who continues with her story to the bitter end, in spite of her sleeping audience.

Frances tells the story of her time in the Star Merchant Marine.  Her first and only mission is with the Zvezda Nochi and a crew of scientists on a routine transport mission to the Kuiper Belt to pick up some mined minerals, with a secondary goal of exploration.  Little did she know that things would go terribly wrong and spooky things would happen.

The catalytic moment comes when the entire crew cram themselves into a shuttle to explore one of the Kuiper Belt Objects, leaving their space ship unattended.

Hang on.  They left the space ship unattended?  Yes, they did.  They were all bored so they all went on the shuttle for a trip out.  Even the pilot?  Yes, even the pilot.  And his two co-pilots?  Them too.  The mission commander?  Yup.  Did any of the ten engineers and technicians decide to stay back to look after the ship?  No.  All nineteen of them went on the shuttle.

When they go to return, they initially can’t find the Nochi because they forgot to leave the lights on.  Luckily — despite the blazing, incomprehensible idiocy of leaving it unattended and forgetting to leave the porch light on — it’s still there; but it looks different.  It appears spooky.

Frances’s sense that everything has become weird and spooky is borne out when people begin to disappear.  Every time they step-shift to another plane of space — which is how large distances are traversed — someone vanishes.

Will the mystery of step-shifting be solved?  Why has everyone who ever looked outside during a step-shift gone mad?  Can Frances solve the problem of the disappearances in time to save anyone?  How does a ship become spooky when everyone leaves it at the same time and how come my car doesn’t become spooky after it’s been empty?  How did Frances get from being on the ship to boring campers to sleep?  All these questions will be given unsatisfactory half-baked answers if you can make it to the end of the story.

“Of Night” is a ridiculously awful story, bringing together the worst elements of science fiction and ghost stories.  The story is packed full of info dumps, unbelievable dialogue and terrible characterization: for example, when Frances is informed two people have gone missing, one of them her lover, her almost affectless response is to note that “losing one of the med officers was bad.”  Her lover isn’t the med officer.  Add to all that the fact that the whole story is apparently being narrated around a campfire and you have an exercise in surrealism.  One can only imagine the campers, staring into the fire as a complete stranger monologs at them:

“Yes, let’s take two dimensions, an X and Y axis, to simplify it. A simple periodic function, like sines and cosines. If you just look at it in 2-D, the value of sine of oh, say, 30 degrees, repeats every time you circle around the origin of the axis, so the value is the same for 30 plus 360, 30 plus 2 times 360 if you circle around again, and so forth. Consider a third axis, perpendicular to this plane: the Z, or imaginary axis. But when you consider another axis, that holds your original X and Y plane, every time you circle through a whole revolution of 360 degrees you are not still on the flat X-Y space but have climbed up a level — or down if you’re going around in the other direction.”

No wonder they’re all asleep before the end of the story.  But instead of stopping, Frances just keeps at it, knowing that “Their sleeping minds would absorb her story.”  I only wish I had been asleep myself, but the thought of the story entering my subconscious without filtering fills me with genuine horror.

The twist ending is so utterly predictable you don’t even need to read it.

Jerry Oltion is just about the most prolific Analog fiction contributor ever; a truly amazing achievement, especially in such a long running magazine.  “The Last of Lust” will send him to first equal, with the next published story pushing him into a clear first place.  Celebrating his fecundity he brings us a story about lust; no doubt a fascinating topic for most people.

Martin and Laura — geeky scientist and voluptuous assistant respectively — are working on mapping the area of the brain responsible for lust.  They discover the on-off switch for lust, and fall in love with each other at the same time.  Unfortunately, their research falls into unscrupulous hands and a lust-destroying virus is released by religious extremists.

The questions are interesting: how would relationships change if lust were removed from the equation?  Would ma and pa stay together?  Who would get together?  The issue is personalized in the relationship between Martin and Laura, so there’s a nice tie between the theme and characters.

The question’s interesting, and the approach fun, but the story is fairly juvenile in its conclusions and outlook.  This isn’t necessarily a bad thing; every story has a target market, and this one is probably aimed more at teenage boys than anyone else.  Martin’s relationship with Laura reads like every cerebral-but-socially-awkward adolescent male’s wet dream.  The fact they have nothing in common aside from sex means little to him, and this is highlighted in the story.  The resulting conclusions in the story might surprise you, but would be logical or even inevitable to the teenage mind.  Overall, a decent story for the right audience.

“The Bullfrog Radio Astronomy Project” by Brad R. Torgersen is a story of first contact and free speech.  Small time community radio broadcaster Ron Kelly teams up with the wealthy and eccentric Andy Chang to broadcast his station out into the universe in a privately-funded Active SETI program.  When they get a response, it isn’t the one they were expecting.

I enjoyed the writing of this story.  Torgersen created a very believable character in the retired Ron and his personal obsession with running his station without corporate control.  The atmosphere of the barren area is also conveyed well, and the structure of the story lets the past unfold naturally while maintaining a sense of urgency in the present.

The speed bump, for me, came in Andy Chang’s response to first contact.  After spending his money on such a vast and hopeful project, his reaction to having aliens respond to his signal seemed remarkably out of character, and the sudden revelation that Ron had army training also didn’t fit with the rest of the story.  After the well-crafted and paced build up, the finale of the story struck me as anomalous.

In short, a mixed piece, but definitely worth a read.

I enjoyed “The Lycanthropic Principle” by Carl Frederick.  It started slowly for me, but had me interested fairly soon.  In the story university professor Paul Campbell discovers he is the victim of two online frauds.  His paper is plagiarized by a colleague and his online presence is sabotaged, or “q-slapped,” short for “quiddity-slapped.”  Seeing his inbox filled with targeted advertisements that imply he has… less than savory tastes, he turns for help to the university’s resident tech-geek and werewolf, Alf Larsen.

Alf is a student who styles himself a werewolf.  Paul tolerates the eccentricity, knowing Alf is the only one who can help him restore his good online name.  In the process, Alf brings Paul into his world, revealing a subterranean existence of webpages without URLs or static addresses, werewolves, wuggies, zoom-wuggies and script-kiddies.  Paul adapts surprisingly quickly, but is he truly ready for everything a werewolf can do?

Frederick manages to pack a surprisingly sophisticated story into his whirlwind tour of fictional geek culture.  He blurs reality and virtual reality neatly, eroding the boundaries.  He makes a nod to A.E. van Vogt’s personal inspiration, Korzybski — another Alfred — having Alf quote his famous phrase: “the map is not the territory.”  He misappropriates it somewhat; where Korzybski intended to isolate reality from abstraction, Alf uses it to argue that the whole thing is too black and white.  Campbell’s plagiarized paper is another allusion to the ongoing issue of reality and fiction.  Similar to the Sapir-Whorf hypothesis, it’s about how language can filter reality.

The only real problem with the story, for me, was the language used by Alf.  He is introducing Paul to a new world, but the in-crowd has a remarkably un-hip language.  I can’t imagine any geek worth their salt calling someone a “zoom-wuggie,” even as a pejorative.  Paul is meant to be sophisticated and swimming in his own popular culture, but he comes off like a forty-something high school teacher who still thinks he’s “rad” and can “get down” and “rap” on the same level as the students.

Overall, an enjoyable and satisfying story.

“The Sock Problem” by Alastair Mayer is the “Probability Zero” story in this issue.  In it, our protagonist rebuilds his dryer.  In the process he flirts with one of the truly baffling mysteries of the modern age: why do socks keep disappearing in the dryer?

I had the sense throughout that I was reading a story I’d already read, and I might as well have been.  Terry Pratchett tackles the same thing by inventing an Eater of Socks.  In The Hitchhiker’s Guide to the Galaxy, Douglas Adams suggests they migrate to another planet.  Even answers.com offers two fictional explanations to match the factual one, and a discussion thread packed with speculation.  It’s a bit of a throw-away joke that’s been done to death and should really have been thrown away.  Still, it was a nice enough story and does offer a mild twist on the old joke.

Overall this issue has its ups and downs.  The SF market is very competitive, and every story published is the tip of an unpublished iceberg.  Analog is very conservative, and I dread to think what’s floating underneath “Of Night,” but found amusement and pleasure in other fictions of the issue.  I didn’t find anything really gritty or substantial to sink my teeth into; perhaps the novelette was intended to provide that balance.  Similarly, the focus of the stories tended toward the teenage and the male: an observation rather than a criticism.