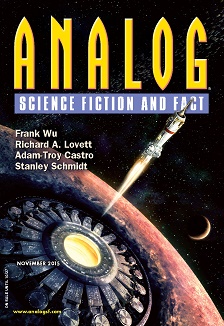 “Seasons of the Ants in a Timeless Land” by Frank Wu
“Evangelist” by Adam-Troy Castro
“Exit Interview” by Timons Esaias
“Baby Steps” by Lettie Prell
“The Story of Daro and the Arbolita” by Shane Halbach
“Building, Antenna, Span, and Earth” by Ken Brady

This issue is largely taken up with a serial so the short fiction are rather thin on the ground. There is nothing too memorable here.

The novelette of the issue is by Frank Wu. It is a rather silly story called “Seasons of the Ants in a Timeless Land.” It posits that ants in a near future go on a forced march from the south of Australia right up toward the equator. All ants are involved and they eat anything within their path. Two myrmecologists – one from the USA and an aborigine from Australia try to stop this infestation. But the ants have become intelligent enough to overcome anything thrown in their way. There is a love story here as well as a mystery as to why every variety of ant is working together. The answer when it comes hinges on knowing your classic genre tropes and makes this silly, but fun rather than just silly.

“Evangelist” by Adam-Troy Castro is the longest short story at eight pages and while not quite a story does use SF tropes to discuss important religious issues. An alien species called the Jzek set up places for homeless to receive food as often as they want. They must talk to a Jzek and hear their deal about faith in God. What follows is a discussion between a man who has fallen from the pinnacle to the streets and an alien. So instead of a story we are treated to a treatise on the alien’s faith in the divine. They are offering mechanical help to be able to always feel the presence of the divine. It is not dry or boring, Mr. Castro is too good a writer for that, but it is a though-provoking idea cloaked in a minimal story.

The next four stories are no more than four pages each. It is hard to create a world and compelling characters or situations in such a short space and these vary on making the short-short work. The first, and best, is by Timons Esaias. “Exit Interview” is a tight and tension filled look at a man in the future being released from his prison. It is not a new concept but is well done with a frisson of fear by the end.

“Baby Steps” by Lettie Prell is about uploading human beings after death. Not new, but this is from the nuts and bolts side of the people actually doing the uploading. Unfortunately, something must arise that is quite out of the ordinary and it becomes a standard SF story about new consciousness. But the setting and characters are very interesting. I applaud the nuts and bolts but not the plot.

Shane Halbach is a new writer to me. He shows promise in “The Story of Daro and the Arbolita” by his use of stories within the alien culture he creates. A man driving a futuristic big rig on an alien planet crashes into some trees in order to avoid killing a native. Due to this, Daro is put on trial for killing the trees. The society is very lightly sketched and the trial involves telling stories to remind the judge of certain truths. It is an interesting idea but too fleeting a glimpse to be very memorable.

The last of these four shorts is “Building, Antenna, Span, and Earth” by Ken Brady. A man wants to jump off the tallest building on the planet Varzon and is stopped by an AI from doing so. Is the man committing suicide or is it an extreme sport? They discuss the ramifications of both. Again a treatise dressed up as fiction.