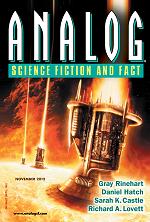 “Strobe Effect” by Alastair Mayer & Brad R. Torgersen
“The Information in a Dream” by Sarah K. Castle
“Siege Perilous” by Daniel Hatch
“Pictures at an Exhibition” by Robert R. Chase
“Tech Support” by Richard A. Lovett
“Survival in Shades of Orange” by Patty Jansen

In one of the last issues under his direction, Schmidt offers readers a magazine full of something approaching “hard” science fiction. It’s an interesting mix. Not all of them are winners, but they all at least give a good accounting.

Owen just can’t help himself. He’s always going to make a public fool of himself over a pretty girl. He’s made that way and there’s nothing he can do about it, even when he’s spinning away 20,000 kilometers above Earth helping to build the first large-scale space habitat.

Which goes a long way toward explaining why, one October, he used blazing orange duct tape to cover the round portions of the station’s maintenance robots and then drew faces on them to create jack-o-lanterns.

“Seagulls, Jack-O-Lanterns, and Interstitial Space” by Gray Reinhart starts out as a nicely written character-based story, but sort of peters out halfway through and ends up rather disappointing. Oh, not that it was a bad story, it’s just that the opening was so good that I had high hopes the rest of the story would keep up with that level. It didn’t.

For the most part, the story seemed to go straight downhill with a forced transition into a rant/argument about child labor. Out of the blue, one character began a deadly serious argument that took up a middle fourth of the story to no real apparent reason.

Despite playing up the importance of the orange-tape-wrapped maintenance ‘bots, the story never really delivers on the promise. They show up again, but their being wrapped in orange tape does essentially nothing. Competent, but skippable.

Near the dawn of the birth of science fiction as a recognized genre, critics lambasted the stories because they were all about the scientific puzzle, or purely adventure with, at best, two-dimensional cardboard cutouts of characters there to spout whatever authors wanted said. Gradually, science fiction stories changed, welcoming writers who actually enjoyed writing about real characters and the science slipped into the background.

In “Strobe Effect” by Alastair Mayer & Brad R. Torgersen, we’re treated to a call back to the good old days of impressive and, more importantly, impressive-sounding science. This time around, though, Mayer and Torgersen make sure to include actual character arcs and a woman who’s not around to only make the manly man in the lead look good.

I definitely don’t have the learning to know if the science in “Strobe Effect” is more than just impressive-sounding gibberish, but it certainly sounds impressive. A workaholic scientist, his lab assistant and a software coder all are working under extreme pressure to develop a faster computer chip.

What they discover, though, might just change their world. And I’m not only talking about the romance wound around the overclocked computer chips. Okay, sure, the romance is doomed to failure a month after “The End” rolls across the screen, just like every other similar romance, but it’s nice to see it while it lasts.

As I said, the science certainly sounds impressive, while Mayer and Torgersen do a good job stringing the words together. Their characters feel like they could actually be real people and, even better, the romance has an almost realistic feel to it. It’s still doomed, of course, but it does feel almost real.

In “The Information in a Dream” by Sarah K. Castle, Renée Nez has a decision to make. Has already made the decision. Will decide yes. Will decide no. Will decide to stay with her dying father. Will make the decision that will lead to her father getting an operation to alleviate his Parkinson’s symptoms.

And her decision will affect how we view the world. Or, at least it will, if, once her brain becomes entangled with the super computer called Deep Freeze, which operates far into quantum realities, she is able to interpret the computer’s ruminations into human thought and confirms the many-worlds view of reality.

Renée Nez is a proud Navajo woman living in Boston with her aging father, who is confined to a wheelchair, almost uncommunicative because of Parkinson’s. Renée works as a dog handler for a quantum computing research project.

The dogs with which she works provide the neural substrate on which the computer operates. Their brains are quantum entangled with the computer processes. And, now, the computer wants the same access to Renée.

It is the process of making that decision that forms the crux of this really quite involving story. Castle brings to live a wonderful character in Renée, the woman’s relationship with her father, one that feels realistic and well thought out. In making Renée a Navajo, Castle brings some wonderful color and an interesting philosophical pathway to the decision. This is a good story, well worth reading. No matter on which of the many worlds you reside.

Nanotechnology is to today’s fiction what the genie was to that of the long-ago: a dangerously powerful option, one which could easily kill the wielder or lift the wielder up to god-like power levels. In “Siege Perilous” by Daniel Hatch, nanotechnology, known as cog technology, became a reality on a Tuesday. The war to control it began on a Wednesday.

In the contortions of that war, nations splintered and ad hoc alliances formed, fighting to control cog technology and to make sure their own cog tech didn’t get suborned by an outsider. Think of it as weaponized spamming. In Hatch’s story, there are isolated asteroid bases, filled with researchers, each trying to find a way to not only survive cog warfare, but to flourish with the genie that’s been released.

Castle Anthrax is one such research asteroid, but this one is different. This one might actually have found the Holy Grail of cog warfare, an operating system that can overwhelm any other, yet is deep-rooted to never go rogue against humanity. Those on the asteroid have only one problem: How do they spread this operating system to the rest of the fragmented, warring humanity?

And then the Divine Sword warship arrives and begins an attack. The delivery system has arrived. If only Castle Anthrax can survive first contact.

Hatch creates a wonderfully engaging world in “Siege Perilous,” which refers to the seat Merlin created at the Round Table for the knight who would find the Holy Grail. Anyone not worthy to sit in the seat would immediately be killed. I enjoyed the story for the most part, finding the dialogue to be readable and realistic.

My only concern with the story was a couple of logic holes, the most obvious being the nature of cog warfare. The characters on Castle Anthrax were worried about being subsumed by the attacking ship’s broadcast malware. I kept wondering why they just didn’t turn off the asteroid’s receivers. Not a big issue, but I wish it had been addressed.

Despite those reservations, I did enjoy the story. I think you will as well.

Because of the Great Warming, species thought extinct began showing up with an alarming regularity, coming out of their population bottlenecks and expanding into the larger temperate climes. Which makes it the perfect time to head out to Canada and hunt for bigfoot packs, in “Pictures at an Exhibition” by Robert R. Chase.

Told by a mostly unknown narrator, “Pictures” relates the story of a trio of explorers who venture in to the post-Great Warming Canadian wilderness in service to one man’s obsession, to prove the existence of sasquatch. Well, when I say told by a narrator, it’s mostly told that way. There are a number of instances when the narrative conceit breaks down and the story proceeds in a more normal fashion, until, it seems, Chase remembers about the narrator and goes back to it.

There’s a twist to the story, but I have a feeling you’ll probably see it coming rather quickly. While this story isn’t something I’d recommend you run out and hunt down to read, it is worth your while if you’ve already got the issue.

Solar storms can throw a lot of things out of whack, especially in a society as wired up and wireless as our own. It’s even more likely if you’re living in a science-fiction short story, because then you can get some really cool effects.

In “Tech Support” by Richard A. Lovett, calling Facebook tech support during a major solar event, one throwing up aurora as far south as Kentucky might get you connected to some place far stranger than India.

Lovett does a nice job filling out an interesting premise, bringing to life a historical figure that doesn’t get much love from the speculative-fiction crowd. This man is no Tesla, but still contributed much to the foundational inventions that helped create our society.

While the historical figure, I thought, adapted much too quickly to conversing with a mostly unaware modern-day person, I still enjoyed the interaction between the two of them on the day following a massive step forward for our man in the past. A breezy read and an enjoyable story, there’s no doubt that Lovett avoided phoning this one in.

One of my favorite types of short story is the science-fiction puzzle story. The protagonist here is dropped into an unfamiliar environment, which then tries to kill her. She has to figure out the puzzle of what’s going on if she wants to survive. I love these types of stories, always trying to match wits with the author and usually coming up short.

“Survival in Shades of Orange” by Patty Jansen is a nice little puzzle story. Jansen does a nice job of setting out the problem, throwing around a few red herrings and then revealing the solution in an engaging manner. Although I have a few quibbles with the anticlimactic nature of the ending, the story itself is a good one.

Gabriella and Mauro, newly married, are on their way to take over the running of Prospero Base on a planet named Vittoria. Gabriella was to conduct scientific research, with the assistance of Mauro. The only problem arrives in a secret communiqué for Mauro. The previous inhabitants of the research platform hadn’t left, they’d been killed.

The prime suspect in the killings was Roger, the research station’s Artificial Intelligence, a computer program that monitored everything done or said in the base and controlled the environmental machinery. Mauro couldn’t warn Gabriella because Roger would be able to read her body language, which meant Mauro had to catch a killer while simultaneously irking his new wife.

I think Mauro managed to solve the puzzle a bit too easily, but Jansen still made it a good enough ride to be worthwhile.

Overall, I’m thinking we can chalk this issue into the win column, even if just barely.