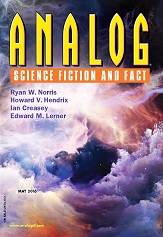 “Artifice of Eternity” by Lettie Prell

“Promised Land” by Bethany Gilton
“The Treaty Breaker” by Brendan DuBois
“O What Freedom, This Great Steel Cage” by Shane Halbach
“The Language of Flowers” by Ian Creasey
“Not Quite Taterona kempi” by Ryan W. Norris
“The Infinite Maniqué” by Howard V. Hendrix
“Mountain” by Andy Smith

Carl Racker shot and killed a man in “Artifice of Eternity” by Lettie Prell. His murder trial should have been cut and dried—hell, he admits to the crime—but there are complications that the legal world isn’t ready for. Technology has advanced faster than society, and just because a man is technically dead, doesn’t mean that he’s stopped living.

Prell addresses a number of sociological issues with the rapid advancement of human technology in “Artifice of Eternity.” From who is actually culpable for long-term health problems, to how transhumanism might affect our legal language, there are plenty of issues within the story that are close to our real world legal problems. Even a casual look at how today’s legal language inadequately services a quickly diversifying population lends an easy understanding to Prell’s premise. Relatively conflict free, the narrative is pensive and reflective, giving readers a peek into a future that may not be far off.

In “Promised Land” by Bethany Gilton, Moses is alone on an interplanetary colonization ship. Well, not alone, exactly, there are others with him, but they are still in frozen sleep, waiting to be woken. And in some cases, woken again. The responsibility is heavy on Moses’ shoulders, as his predecessor abandoned protocol to satisfy his own greed and lust, leaving Moses to struggle to recoup what was lost. Alone he can conserve and grow what would be necessary for the rest, but it wouldn’t be so bad to have some companionship, would it? Just someone to help him out around the ship, really.

“Promised Land” begins and ends with a simulated reality that is left somewhat floating in the story. The connection between Moses’ game world and his real world is somewhat tenuous, aside from the natural escapism that one might wish for, given Moses’ solitary situation. The plot drifts without much conflict beyond the brief moral choice that Moses is faced with at the end, though even this he seems to shrug off with little difficulty. “Promised Land” shows the reader what trials a long-term space voyage might press upon future astronauts, when loneliness and freedom from Earth-born regulations competes with our baser natures. Perhaps though, the lens through which the story is projected could have benefited from a bit more internal conflict.

There are a lot of things that could go wrong when running a colony on an asteroid, but hijacking isn’t one that Chair ever thought she’d encounter. In “The Treaty Breaker” by Brendan DuBois, Chair and her crew are surprised by the sudden visit of a UN envoy claiming to be on a mission to document the health and safety of the colony’s children. Things smell fishy from the start, however, and when Chair happens to hear a single loaded word in Russian she knows that this is far from a peaceful inspection. What she does next could mean life or death for her crew and everyone under her care.

“The Treaty Breaker” is a perfect example of science fiction used as a vehicle for a more general theme. This plot could be used in any number of settings, but DuBois gives it a claustrophobic spin by setting it in the anti-gravity tunnels of the Geographos. The characters are all diverse in personality and in appearance, which paints a realistic vision of what a future space colony might look like. That the Geographos is also an NPO instead of a for profit corporation likewise gives “The Treaty Breaker” a bit more flavor over other stories like it.

In this very short piece of fiction, Halbach explores the theme of imprisonment in all the forms it may take. Through the lens of four characters the reader is taken viscerally into the every day struggles of a paraplegic, an agoraphobic, a voyeur and, briefly, the robot itself, to fully understand the nature of limitation and human self-centeredness. Short as it is, “O What Freedom, This Great Steel Cage” will leave a lasting impression on the reader.

The Victorians assigned a meaning to each flower. In “The Language of Flowers” by Ian Creasey, Travis Chase and Harriet Ormonde have taken up genetically enhanced flowers so that they produce a pheromone scent to convey those meanings. But not all the words in the language of flowers are positive. When Travis receives a custom commission for a flower to convey racism, he knows from experience the job is bound to stir up trouble. But Harriet takes every commission as a personal challenge and Travis is committed to keeping the customer happy, no matter what it costs them.

“The Language of Flowers” is a simple yet powerful story that combines real world elements with a dash of science fiction in a positively delightful way. Most readers will be familiar enough with at least a few of the meanings assigned to specific flowers and so the premise of giving the flowers a scent to convey that meaning will resonate an agreeable note of truth throughout the read. The plot and the conflict are solid and well crafted and the conclusion is satisfying, making “The Language of Flowers” an easily digestible and fun read.

Sidetracked is not having a very good day in “Not Quite Taterona kempi” by Ryan W. Norris. Doing everything in his power to gain tenure at Aegean Hills, an assignment has landed on his desk that has the potential to end his time in the Mediterranean by the sheer banality of the project. He is to translate a stretch of the repository about a human, just an ordinary human named James Freeman, going about his ordinary human life, doing nothing at all of importance. But as Sidetracked will soon discover, even ordinary individuals can make huge changes in the history of their people.

“Not Quite Taterona kempi” gets to the heart of a universal human concern: how will I be remembered, if I am remembered at all? Most of us aren’t going to be memorialized in grand tombs and textbook history. Whether we are aware of it or not, our goal with our time on Earth is to make as big of an impact on society as we can, to be remembered for something. Norris looks at this human dilemma from a few different character and scientific lenses and combines philosophy with hard science with storytelling to come up with an interesting look at how humans as a whole and humans as individuals may be remembered long after we have been erased from the planet.

“The Infinite Maniqué” by Howard V. Hendrix takes readers to the Congo, where Mary, an ambitious primate researcher, teams up with Carl Wallach to mentally enhance bonobo monkeys through rigorous drug and breeding trials, all under the scrutiny of their anonymous financial backers. But when one of their monkeys, Panto, becomes rapidly more advanced than the rest of the P group, Mary has misgivings that the experiment has gone too far. What was once a playful adage about monkeys writing Shakespeare has become a frightening obsession that is spiraling out of control.

Research morality and ethics play a big part in “The Infinite Maniqué ” but so too do classic literature, history and quantum computing. In fact, so much knowledge has gone into the writing of this novelette that the broadly learned will find themselves pleasantly tickled, and those who enjoy new discoveries will find a multitude of new learning avenues to explore. Hendrix weaves this narrative non-linearly, with short chunks of the story dropped seemingly without rhythm or rhyme for the reader to piece the story together as they go. While this does a good job of keeping the reader in suspense, the length of the story makes it a bit difficult to know where to put all the events chronologically without dropping a few which may be crucial. The final paragraph however does take the reader back to the beginning, refreshing some of the key details and smoothing out the narrative into one, seamless whole.

Jennifer has just lost her son in Andy Smith‘s “Mountain.” It would be a traumatic event for any mother but frankly, Jennifer is surprised by how little she is moved by it. She knew this was coming. She knew what road her boy had been on. When the Gift or the Reward or the Apology or the Battery—whatever you choose to call it—ran out of juice, some people, some women’s children couldn’t think of a better way to jumpstart it than to die for it. And now she has to see it, whether or not it kills her to do it.

“Mountain” is a story with very ponderous momentum. It never really picks up, but neither does it slow at any point, either. It plods, giving the reader the sense of climbing the mountain with Jennifer. The premise of the unknown object being both central to the plot and on the periphery is interesting. I’m not sure it could have been done without the slow, introspective pace of the narrative, which ends in the same morose tone that mirrors the mourning of a mother who has watched her child die long before his heart stops beating.